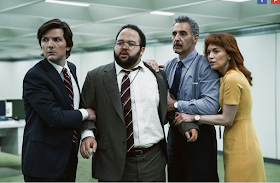 People kept telling me to watch Severance, but it was not until Leigh Johnson referred to it as a follow up to Black Mirror that I became curious. No one knows, and appreciates Black Mirror more than her. Now that I have seen the show I would go further back and say that it can be understood as a contemporary Twilight Zone in that at its core it is about a wish, something longed for, and the unintended consequences of that wish. What is the wish, though? For those of you still reluctant to join a new streaming service, I will sum up the basic premise of the show. It deals with a group of employees for the company Lumon who have volunteered to be "severed," the work life and memories separated from their home life. When they are at work they remember only work, and at home they remember only their home life. The popular response to this is that the fantasy underlying such a technology is that it is an attempt to find the much sought after "work/life balance:" no more anxieties about work deadlines keeping one up late at night and no more personal problems interfering with work. Everything is back in its proper place, the worker is at work when he or she is working and at home when they are home. This fantasy is reflected in the shows aesthetic, which suggests a nostalgia for the cubicle and the central office in the age of the cellphone, laptop, and the disseminated office.

This very much reflects current anxieties, but it seems to me that the show deals with a division the precedes the contemporary concern of time spent in the office. As Marx argues, wage labor, the selling of one's time and labor power, presupposes a division between the worker as both owner and seller of this commodity. As owner he or she is, like any other owner, seeking the best possible price, the best possible deal, for their time and effort; as seller the worker loses control over not only this commodity, but their time and activity belongs to someone else, and they are all the more alienated because they cannot alienate themselves, which is to say remove themselves from its use. They have to live out their day as their time, activity, thoughts and passions are controlled by another. As Pierre Macherey writes, “The condition for the wage system to produce all its effects is therefore that the worker has been put in the position of a divided subject, remaining entirely master of his labor power, has alienated only its use, which presupposes that this force can be materially separated from its use.” The wish, the fundamental dream underlying Severance, is the fantasy that one could only occupy one side of this exchange, to sell labor power and never endure its use. To leave your body and mind at work and come back and pick them up at the end of the day. This would be the dream, a life of consumption without production, of free time without having to work, but Severance shows how that dream once realized, made literal, becomes a nightmare.

In Severance this split in the subject becomes a split between two subjects. One, the "innie," only knows about work, and is, at least in his or her perspective, is always at work; the other, the outie, is never at work and knows nothing about it. That this is an asymmetrical deal is illustrated by the character of Hellie (Britt Lower), who is severed at the beginning of the first episode, waking up at work, unable to remember anything about the outside world and beginning her life as an innie. She recognizes that she has the short end of the stick and wants out as soon as possible--literally running for the exits, but it turns out that her real jailer is not the corporation or her boss but herself, her "outie" who considers herself to be "the real person," leaving her work self to pay for her existence. One Hellie, the "outie," lives in the heaven of the sphere of exchange, free to spend her time and money as she pleases, while the other, "the innie," is stuck in the hell of the hidden abode of production. (This is an interesting twist on the idea of doppelgänger.)

As much as Severance can be understood as picture of a kind of cubicle hell, focusing for the most part on the workday of those who will never know anything else, part of its genius is that it is attentive to all of the little strategies that make the workday not only livable, but actively desired. One of the central characters, Mark (Adam Scott), who we see as both and innie and outie, as both worker and person at home, is grieving the loss of his wife. Work is a respite from the pain of his home life. This is something that most critics of work overlook that in an increasingly atomized and mobile society work is for many people their social life. Work is portrayed as a place of friendships and frustrations, an entire world of social relations that is often desirable because, for all of its pains and boredom, there are at least other people, and, if you meet the right productivity goals, there are finger traps and waffle parties. (As Frédéric Lordon argues, part of what sustains the control that work has over our imagination and lives is our ability to adjust, to make the small pleasures of work fill the inability to struggle for greater ones. This is the finger trap of work life). 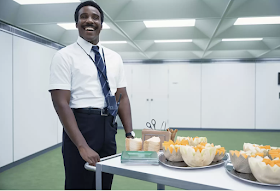 The rest of the members of the Macro Data Department, the department where Hellie and Mark work, make up the basis of a community of sorts complete with its little frustrations and pleasures. We have Irving (John Turturro) who has memorized the handbook, chapter and verse, and idealizes Lumon's founder and CEO, and Dylan (Zach Cherry) a man who has never passed up a chance to earn a waffle party. In the midst of all of Severance mysteries and satire there is a the basis for a pretty good workplace sitcom. This genre mashup, the moments of levity among the horror, only serve to punctuate the nightmare. It is because work is not a total hell in some theological sense, a place of total and complete horror, that it becomes our living hell.

So in the end, and I must admit that I have not finished the show yet (I am about halfway through), I am tempted to read its science fiction device as less a future possibility and more of a way of getting at a current reality. It is not a matter of asking, as in the case of Black Mirror, what would happen if we had this technology, if we could split ourselves into two selves, but that we already do. All of our dreams in capitalist society, of vacations, of things to buy, even of retirement, to the extent that it exists, are constitute in actively forgetting that they are paid for by our nightmares, of endless hours under neon doing pointless and meaningless tasks. We are always already severed and constantly subjecting our own "innie," to more and more work, so that we can live our lives as the "outie" that we take ourselves to be. The question that the show provokes in me is not what would it be like to be severed, or would you agree to be severed, but what would be like to live an integrated life, to live not as two sides of a commodity, owner and user, always at odds with oneself, but a life not subject to such divisions.