Doppelgängerland: The New Monster is Us 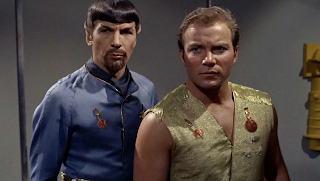 Monster come in cycles. Werewolves wax and wane in and out of cultural visibility, and even vampires disappear and return. There might even be an end to zombie movies someday. Perhaps the current period will be known as the year of the doppelgänger. I am referring not only to Jordan Peele's brilliant Us, but also the return of the mirror universe in Star Trek: Discovery and Counterpart on Starz. If one wanted to add a literary reference one could include Ted Chiang's story "Anxiety is the Dizziness of Freedom." (I know that there might be more stories and novels, I just reading Exhalation now and cannot resist plugging it).

We can then ask the question what anxiety or fear does the doppelgänger represent? Why has the double become our particular fear and fascination now. Of its various formulations and manifestations in popular culture Counterpart is most interested in answering to the historical and cultural moment. The premise of the show is that sometime in the tail end of the cold war scientists in East Germany discovered or invented an alternate reality, a reality exactly the same as ours. At first this other world, "prime" in the language of the show, was embraced by the scientists of our Earth, Earth Alpha, as the perfect laboratory for studying humanity. You cannot observe something without changing it, and eventually the two worlds begin to diverge. When the action of the show begins, sometime in the present day, the two worlds have not only diverged, most significantly Earth prime has been ravaged by an epidemic that has decimated its population. This epidemic may have been intentionally released by Alpha or it maybe the effect of different immunities in the two virtually identical world. Both worlds have engaged in a clandestine cold war, sending spies and agents across the wall that separates the two worlds. Oddly the show is both post-cold war spy thriller and a cold war allegory. Earth Prime increasingly looks like what one imagines to be life behind the iron curtain, the architecture is more austere and they don't have the latest gadgets, and a wall staffed with guards and bureaucrats stands between the two worlds.The border between worlds is even in Berlin, as if to drive the point home, but now it is a secret wall hidden underground and unknown by most people. The cold war of explicit ideologies was ultimately replaced with something both more intimate and more secret.

The plot of the show begins with Howard Silk (J.K. Simmons). In our world, Earth Alpha he is a mild mannered bureaucrat for the UN in Berlin caring for his hospitalized wife, the the other world, Earth Prime, he is a spy and assassin. One of the question that the show constantly confronts is how does the same person, same DNA, same childhood history, become someone very different? Or do they? The doppelgänger is a figure of identity and difference. Their visual similarity is first undercut by an uncanny difference of actions or ideals, but this difference is often revealed to conceal a deeper similarity. (Once again Us is exemplary in how it draws out this dialectic).

Counterpart interweaves historical and individual identity and difference, doubling the world and the characters that populate it. In an era in television in which shows can supposedly be divided somewhat between the sociological, interested in depicting an era or inventing a world, and psychological, interested in depict a singular character and (generally) his motivations, fears, etc., Counterpart's strength is interweaving these two aspects.

It is through this interweaving that we can answer the question of the contemporary allegory of the doppelgänger. It is the monster for an age in which power is increasingly justified through an appeal to human nature. Without getting into an argument about the strengths and limits of the term "neoliberalism" it is possible to argue that capitalism is increasingly legitimated by an appeal to a naturally avaricious and competitive human nature. Of course arguments about mankind's natural tendency to "barter, truck, and exchange" are as old as Adam Smith. The difference is that Adam Smith had to make that argument, the contemporary appeal to homo economicus is less about an explicit argument than an implicit common sense. A common sense that is produced and reproduced by the dissemination of market, and competitive mechanisms throughout social life. The turn to human nature is also a consequence of the dominance of the "there is no alternative" narrative. The lack of a viable alternative further reinforces the anthropological aspect of capitalism. On the grand stage of pundits and politicians the only alternative that appears are various racist "populisms." These too have their anthropological dimension rooted in pseudo-scientific ideas about a natural tribal consciousness that recognizes friends and despises outsiders. Homo economicus against homo tribalus. The idea the politics is framed between different social, economic, and political structures collapses into an internal conflict between tendencies in human nature. The enemy is always us because there is nothing outside of us.

Counterpart has its own points to make about this "anthropological turn" in politics. Since the cold war is between two initially identical worlds. Intelligence can be gained by simply capturing one's counterpart, one's double. The double can indicate one's tastes, habits, and patterns being an unwitting double agent. We are ultimately betrayed by ourselves. It is a striking allegory for an an age in which we all have a double (at least one) in the form of our digital avatar, giving up information about us all the time. Political ideologies have become anthropological because political power has become so intimate.

A recent Netflix film  Cam really pushes the point that we are already surrounded by dopplegängers, by the doubles (and triples) we create online. The film concerns a "cam girl" who one day finds that her online self, the persona she uses to make money, has become not only autonomous, creating videos without her, but does things that she would never do, breaking her rules. We create these doubles to protect and guard ourselves from the implications of our actions, to protect our real selves from our virtual lives. The dopplegänger reminds us that such digital dualism is as untenable as the older cartesian variety. Our virtual selves have real effects.

It is on this stage that doppelgänger emerges, the fear that our enemy is ultimately us. That what we are fighting is something inside of ourselves. The doppelgänger could then be considered a monster that follows the collapse of the imagination. The aristocratic fear of the vampire and even the consumerist other of the zombie leave only us, a double in their wake. At the same time the doppelgänger can also reveal this "default in our imagination" to use Jameson's phrase. It reveals to what extent we imagine the others based on a projection of "our own temperament," to use Spinoza's formulation. In an episode of the second season of Counterpart this antagonistic identity is illustrated by the phrase uttered about plans to prepare a doomsday virus to defend against the other Earth, "if we are thinking it then they are thinking it." Every hostile act that one can imagine is justified because we imagine the other to be like us. The doppelgänger is both the figure of the collapse of our imagination and the possible recognition of the limit.  When the monster we are fighting is us, when we become our own worst enemy, we truly have nothing to lose but our tethers.
Posted by unemployed negativity at 11:09 AM