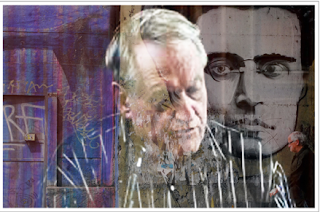 In some sense this is a belated response to André Tosel's passing last year. When Tosel died I was only vaguely aware of his name, I may have read an essay on Spinoza or Balibar here or there, but only knew his work by reputation. It was the initial wave of responses to Tosel's death especially this interview on Revue Période that got me interested in reading Tosel. I started by reading Spinoza ou l'autre (in)finitude and have gone through the little Emancipations aujourd'hui? Études sur Marx (et Engels), Du Retour du Religieux, and Le Marxisme du 20e Siècle, with a few more on the way.
Read more »
Posted by unemployed negativity at 12:21 PM No comments: 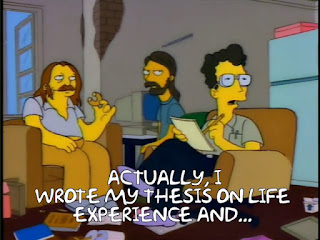 Image from the Simpsons and Frinkiac.

Two thoughts immediately come to mind when considering Yves Schwartz's Experience et Connaissance du Travail. The first, which provides the inspiration for the image above, is the absurdity of dragging around a nearly nine hundred French book on worker's experience and knowledge. The second, somewhat more relevant thought, is that the book in some way feels like a missing element from my education. I never heard it mentioned before I dug deep into some of the writing on work coming out of France, but I know its references from Georges Canguilhem, who wrote the introduction, to Althusser, Foucault, Levi-Strauss, and Bourdieu. I partially understand why it never was translated or made it across the Atlantic, aside from the length it is indebted to many figures that never became part of "theory," Lucien Sève for one, but the fact that it is a book on experience written under the direction of Georges Canghuilhem should at least be of interest. Foucault famously posited a line of demarcation between philosophers of experience, existentialism and phenomenology, and philosophers of the concept, Canghuilhem, the philosophy of science. Schwartz is describing an experience that is irreducible to lived experience because it exceeds and situates life, or more to the point, living labor.
Read more »
Posted by unemployed negativity at 5:26 PM No comments: