Put a Drone on It: Chamayou's A Theory of the Drone 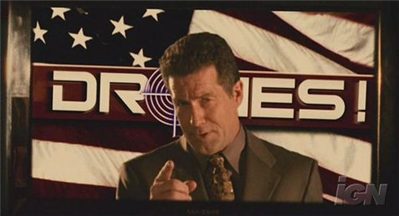 
Drones are having their cultural moment right now. They have appeared in such films from Interstellar to Captain America: Winter Soldier. While in the first film the drone's cameo appearance was used to shuffle in some post-Empire concerns (the drone was an Indian Surveillance drone), in the latter film drones do not directly appear but the the film deals with "drone anxiety." Drone anxiety is the fear that the very things that make drones strategically desirable--"precision targeting," low risk, and stealth, will make possible a massive centralization and automation of state power. (Sleep Dealer, pictured above, was ahead of the curve on this point). The unmanned ariel vehicle becomes synonymous with a breakdown of responsibility and centralization of control. In many cases the fear of the drone then just merges with fears of robots. In any case drones are hot, and the war on terror is not (or at least less so).
Read more »
Posted by unemployed negativity at 11:18 PM No comments: