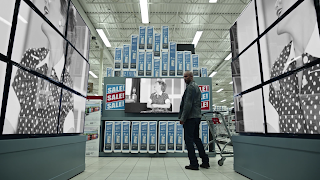 The following passage from Marx's Grundrisse could serve as a fairly accurate pitch meeting for American Gods:
Let us take e.g. the relation of Greek art and then of Shakespeare to the present time. It is well known that Greek mythology is not only the arsenal of Greek art but also its foundation. Is the view of nature and of social relations on which the Greek imagination and hence Greek [mythology] is based possible with self-acting mule spindles and railways and locomotives and electrical telegraphs? What chance has Vulcan against Roberts and Co., Jupiter against the lightning-rod and Hermes against the Crédit Mobilier? All mythology overcomes and dominates and shapes the forces of nature in the imagination and by the imagination; it therefore vanishes with the advent of real mastery over them...
From another side: is Achilles possible with powder and lead? Or the Iliad with the printing press, not to mention the printing machine? Do not the song and the saga and the muse necessarily come to an end with the printer’s bar, hence do not the necessary conditions of epic poetry vanish?
The show, which is based on Neil Gaiman's novel of the same name, concerns the conflict between the "old gods" and the "new gods." The old gods are the gods of gods of disparate pagan traditions from Odin to Anansi, all brought to this country on slave ship and with indentured servants and immigrants, all in decline, forgotten by the people who once brought them to these shores. The new gods, at least the ones we meet are Media, World (globalization), and Technology, the new forces that people look to in their despair and aspire to in their desires. As Odin, or Mr. Wednesday as more commonly known as, puts it in Neil Gaiman's novel, "There are new gods growing in America, clinging to growing knots of belief: gods of credit card and freeway, of Internet and telephone, of radio and hospital and television, gods of plastic and of beeper and of neon. Proud gods, fat and foolish creatures, puffed up with their own newness and importance."

The explanation of the existence of Gods and their conflict is more Feuerbach than Marx, as the novel makes clear. The gods' thrive on belief, on prayer, and sacrifice,

“People believe, thought Shadow. It's what people do. They believe, and then they do not take responsibility for their beliefs; they conjure things, and do not trust the conjuration. People populate the darkness; with ghosts, with gods, with electrons, with tales. People imagine, and people believe; and it is that rock solid belief, that makes things happen.”

American Gods is a literary formulation of the paradox of alienation, to use the term familiar to both Marx and Feuerbach: what people create, what people believe, ends up controlling them. Or, to use a different name for this same process, one closer to the realm of narrative, it is what Yves Citton calls "immanent transcendence," what is entirely immanent to human existence, desire, fear, and imagination, produces as an effect an image of transcendence, of some instance standing above society, God, the sovereign, the state. The effect then becomes a cause (or what Deleuze and Guattari call a quasi-cause) dictating actions, desires, and beliefs. There is no real surprise as to why writers are drawn to this idea, the notion that stories have power but only if people believe in them has been going on long before Tinkerbell drank the potion, it is an occupational hazard the way the same way that philosophers believe in the power of ideas and architects believe in built structures. Triangles imagine triangular gods and dogs dream of dog gods. This multiplicity, the presence of the immanence in the transcendence, is not something the novel is silent on.

"Have you thought about what it means to be a god? ... It means you give up your mortal existence to become a meme: something that lives forever in people's minds, like the tune of a nursery rhyme. It means that everyone gets to re-create you in their own minds. You barely have your own identity any more. Instead, you're a thousand aspects of what people need you to be. And everyone wants something different from you. Nothing is fixed, nothing is stable.”

It is at this point that the differences between the novel and the series become relevant. The series sticks to the first few plot points of the novel, the first two episodes are mapped neatly onto the first few chapters of the book. A few episodes in, however, the two diverge, the series is set in the world of the novel but is not an adaptation of its plot, at least word for word. There is an interesting formal question here: the adaptation of novel for film used to be a paring down of extraneous elements, as plots and characters are dropped to fit into a film, but now with television displacing film it becomes a matter of stretching out the premise into something that can sustain indefinite variations. Novels, films, and television series are predicated on different economies of desire and belief, doling out their satisfactions and frustrations differently. The change of form cannot but affect content.

The series greatest departure, at least so far, is how it presents the conflict between the old and the new. In the series the old gods are not just forgotten they are also transformed. As Mad Sweeney, the leprechaun puts it. "I was a king once. Then they made me a bird. Then mother church came along and turned us all into saints and trolls and fairies. General Mills did the rest." A history not so much of being forgotten but of being retrofitted and reinterpreted. "Whatever exists, having somehow come into being, is again and again reinterpreted to new ends, taken over, transformed and redirected by some power superior to it..”Pop-Nietzscheanism rather than pop-Feuerbach. Ostara lives in a home with dozens of Jesuses (Jesi?) of multiple races and denominations, bunnies, and plates covered with plates and jelly beans.