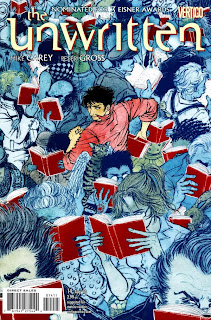 Lets begin with a story, I decided to read Yves Citton's Mythocratie because I was interested in his reading of Spinoza that I encountered in other contexts. It just so happened that soon after I wrote the blog post on that book I also received a copy of Christian Salmon's Storytelling: Bewitching the Modern Mind which Citton cites (actually two copies, but that is another story). As the title suggests, Salmon's book is also about narrative as a tool for marketing, management, and politics. At this time I also started reading Mike Carey and Peter Gross' The Unwritten series based on a recommendation from my local comics shop, which also deals with the stories and their power. Narrative is not something that I am "working on," Spinoza, or post-Spinozist understandings of transindividuality are, but one thread led to another, and ended up intersecting with my reading of comics, something I rarely blog about (no one can confess everything). These two errant threads began to connect in something that suggested more than serendipity when the latest collected volume of The Unwritten was titled "On to Genesis," a pun that would seem to invoke Simondon's ontogenesis. So as my work and entertainment intersected I decided to make a "busman's holiday" of it and write about The Unwritten.

The convergence of theory and comics dealing with narrative might seem like Zizek's example of the "parallax view," in which the same phenomena is viewed from "high" and "low" culture. However, identifying the contemporary comic, or graphic novel to use the parlance of the times, as necessarily lowbrow or populist is an incredibly dated view, almost like calling them funny pages. Graphic novels have become very literary, or high culture, and theory has become very pop (something Zizek knows very well). The Unwritten follows a kind of meta-fiction, the closest precursor of which (at least that I can think of) is Alan Moore's The League of Extraordinary Gentlemen, but whereas Moore's comic was interested in transposing the narrative conventions of the comic book superhero team unto past generations of speculative fiction, making a superhero team of the invisible man, Mr. Hyde, Captain Nemo, etc., Carey and Gross make narrative the subject of their work.

The story of The Unwritten is still unfolding at thirty plus issues, and is difficult to entirely recount. It begins with Tom (or Tommy) Taylor who is both the son of Wilson Taylor, an author of an incredibly popular series of young adult books about wizards (and vampires), and the namesake of the central protagonist of these stories.  It would be as if J.K Rowling had a son named Harry Potter, and he made a living appearing at fan conventions. Oh, and Wilson, the author has disappeared, which begins to suggest that things are not as they seem. The overlap of reality and fiction, the reality of fictions, their particular power and force, and the fictions of reality, the stories we are told, and tell ourselves just to get by, are the central concerns of The Unwritten. 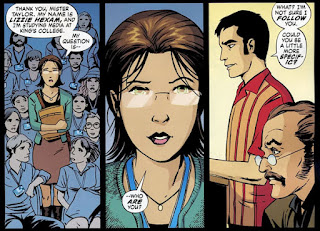 As the stories progress we learn of a secret and ancient dark cabal that is very concerned with what stories get told and how, they are "the unwritten" of the books title and they control the world by control of its stories. The story of the unwritten is fleshed by a series of literary allusions and references that become increasingly dense, spanning everything from the Epic of Gilgamesh to Mary Shelley's Frankenstein. These references become increasingly important as the story progresses so much so that the comic alternates between stories having to do with Tommy and his friends as the uncover the actions of the unwritten and stories about the long history of the politics of narrative, covering everything from ancient myths to the invention of the printing press. The political dimensions are still a little unclear, although an early literary aside suggests that Rudyard Kipling is being controlled by the cabal and Mark Twain and Oscar Wilde are not. The opposition of Kipling, the literary colonialist, and Twain, one time member of the American Anti-Imperialist League (not to mention Wilde, author of The Soul of Man Under Socialism) suggests that the politics of this cabal are imperialist. Carey and Gross are not interested in such a direct allegory, but use Kipling to introduce one of the comic's central images, the whale. Kipling's "How the Whale Got his Throat" is introduced as a literary response to hidden and immense power of this cabal. 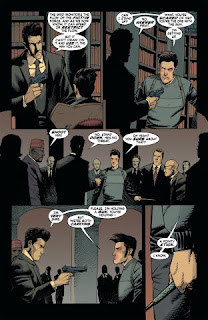 Whales become central to an entire storyline taking up several issues, as it is revealed that Tommy, as a person/character, is able to travel through different stories, and travels through Melville's Moby Dick. No sooner is Tommy swallowed by the whale than he finds himself encountering others who have been swallowed by whales, Baron Munchausen, Pinnochio, Sinbad, and Kipling's shipwrecked mariner. The whale turns out to be a dense metaphor. The terms of this metaphor are established by both Kipling's tale, in which the whale is cursed to eat only the smallest of fish, and Hobbes' Leviathan, in which the great beast is made up of individuals. As Carey and Gross write, "And Hobbes whale was just a symbol. It stood for the power of the masses. A billion living things making up one huge entity." 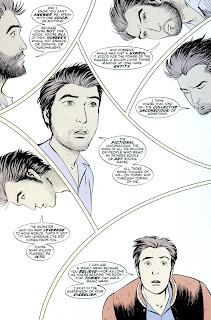 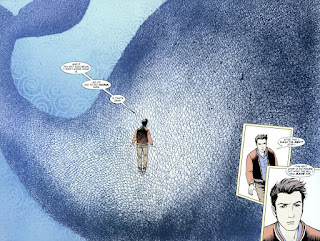 Carey and Gross' reading of Hobbes is somewhat Spinozist in that it suggests that the leviathan, the sovereign is nothing other the desires, dreams, and imagination of the multitude. More importantly, the leviathan becomes a symbol of the power of stories themselves, of the collective unconscious, of massive power which is nothing other than the power of the smallest and seemingly most ephemeral things, stories dreams and imagination. (Yes, it is a comic book with an interpretation of Hobbes)

This dialectic of the smallest and the largest underlies Salmon's book as well. Salmon begins by recounting how stories seem very slight, but goes onto to describe their centrality in marketing, as the age of the logo is replaced by the narrative; management, in which narratives become the new motiving force, the new spirit of capital; and politics, which can be seen as the battle over narratives. Salmon, like Citton, cites Reagan's story about "the welfare queen who'd purchased a Cadillac with government largesse," a story which continues to dominant contemporary politics. As Salmon argues, a direct line can be drawn from this story to Suskind's often quoted passage about the creation of reality. That is what stories do. Political power, economic power, and military power all rests on who tells a better story. As Salmon cites James Carville responding to Bush's commercial, dubbed Ashley's Story, "A narrative is the key to everything. They produce a narrative, we [democrats] produce a litany." Salmon's book charts the rise of spin and storytelling in all forms of power, as not only electoral politics but market share increasingly belongs to the one who has constructed the best story.

If Salmon's book and Carey and Gross comic series are not to be juxtaposed as high to low, then how are they to be related. At first glance it would seem that Salmon is talking about something new, image consultants as a new job description, while Carey and Gross are talking about something very old, literature and myth. This is not entirely true, Carey and Gross have more illustrations of the internet, of webpages, news sites, and discussions, than any comic I have read. However, I do think that the tension between these two readings does suggest a problem: how to think through the intersection of the various technologies of narrative, from books to webpages. As Salmon suggests, part of the power of narrative comes from a kind of excess of information: it is because we are overwhelmed by so much information that narratives and stories hold so much power in sorting information. More to the point, I think that reading Carey and Gross' comic with Salmon (and Citton) helps underscore a central problem. We know that narratives are the point where the small become large, where the smallest fantasies and imaginations shape the world, and the stories only take hold, become big, by motivating these desires, but what remains obscure is how this happens. The history of fiction illustrates this, as books and films which were rejected and maligned eventually become blockbusters, taking hold of the imagination of millions. The Harry Potter series, Carey and Gross' model for Tommy Taylor, is one such example of this happening, but there are others. Politics has its unscripted moments as well, its rupture to narratives. What is lacking in every theory of the spectacle, of manufactured life is an account of this constituent practice. It seems to me that this is a question that neither theory nor literature can answer, but is necessarily explored on both fronts, as theory and practice.

All images by Mike Carey and Peter Gross, covers by Yuko Shimizu, Vertigo comics.
Posted by unemployed negativity at 10:48 AM