After Alienation: Activity and Passivity in Work and Consumption

Debates about alienation with respect to Marx tend to focus on its philosophical underpinning, its humanism and essentialism. This is perhaps due to the immense influence of Althusser. Philosophically Althusser was right in turning our attention away from the half worked out notebooks on alienation, burdened by various anxieties of influence, and towards Capital, towards exploitation and the value form. However, their is an affective dimension to alienation as well, and part of its appeal, its long history in the works of the Frankfurt School, existentialism, punk rock and comic books, has to do with the way it captured a particular sensibility, a particular structure of feeling. This particular feeling appears to have been on the wane for quite sometime. 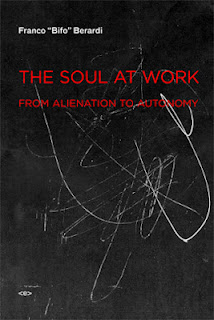 My basis for this assertion are largely anecdotal. I have taught Marx's "Estranged Labour" at least once a year in various classes, Introduction to Philosophy, Political Philosophy, Nineteenth Century, for a dozen years or so. Some students immediately respond to it, recognizing something in the loss of object, activity, and a world, while others treat like yet another communique from an alien world and culture. The latter group understands the words, but not the sensibility. They argue that wages and consumption more than compensate for the loss of control. Over the years it seems that this ratio has been changing, the few who "get it" dwindle and those who do not increase. Soon it will just be that one kid in the "Rise Against" T-Shirt nodding his or her head while everyone else tries to hide the fact that they are texting under the desk. One could come up with multiple explanations for this, bemoan the fact that students do not read anymore and so on, but it seems to me that the waning of alienation needs to historicized. Alienation belongs to a particular period of the history of capital, it emerged in the monotony and fragmentation of the factory, and expanded to a general philosophy of culture against the backdrop of a mass produced society.

The opening chapter of Franco Berardi's The Soul at Work: From Alienation to Autonomy offers a thumbnail historicization of alienation and its revival in the 1960s. The concept is situated ambiguously between history and anthropology; on the side of history is Marcuse and the Frankfurt School, who situate alienation against the standardization of a mass produced society, while existentialism makes alienation the basis of anthropology, making it an eternal struggle between freedom and practico-inert, the self and other. Berardi's intention is to draw out a third perspective, the Italian Autonomist, or compositionist, one, in which alienation is understood to have its own positivity, to be the basis of refusal. The task is not to make labor less alienating, but to refuse labor. However, all of these positions, all these different perspectives on alienation, seem outdated, the products of a different world. It is one of the merits of Berardi's work argue that we need to think the affective basis of critique against the backdrop of the new composition of labor. Berardi has drawn attention to the psychic damage produced by the accelerating circuits of stimulation that define both work and consumption, the breakdown of attention and depression that results from this imperative to connect.

Bernard Stiegler's work also suggests a need to revise the anthropological and affective basis of critique. What he suggests is an expansion of the term proletarianization. Whereas Marx's use of the term referred to the loss of skills, knowledge, and participation in the production process, as the worker becomes just abstract labor power, Stiegler suggests that proletarianization needs to be expanded to include the loss of participation in consumption as the consumer becomes abstract buying power. What we consume we consume passively, with the transition from books to film, and from music as performed to recorded music, we lose the capacity to create as we consume. This loss of creation, of what Stiegler calls participation, is a loss of individuation, an inability to create individual interpretations and creations.


As I have suggested elsewhere, the neo-Spinozist turn to affects and specifically the idea of "joyful passive affects," as a way to make sense of the current sensibility. Joyful passive affects are affects that are joyful, an increase in power, but are inadequately grasped, caused by something outside of us. These are the affects that are constantly offered to us. They are offered us in entertainment, as each spectacle promises to be more exciting than the last, moving from the excitement of the hype to the disappointment that inevitably follows. They are offered us in work as risk and conquest become valorized as the central values of the economy. It is not just that these pleasures fail, there are still joys to be had in the culture industry, but that each pleasure deprives of our capacity to create our own joy. We are made to experience our dependence as pleasure, searching for stimulation. The only alienation that remains is being cut off from these networks of stimulation and provocation.

The reference to Spinoza and the distinction between passivity and activity, joy and sadness, is helpful despite the fact that it risks grounding this entire critique of consumption and production in what is essentially a metaphysical distinction. Moving beyond alienation and thinking through the affective basis for critique is a task of adequately grasping the passivity in our activity and the activity in our passivity. Berardi is right to argue that we are increasingly compelled to be motivated, to network and connect, to see work as less of delimited task than a perpetual challenge. This could be described as a passive activity, the compulsion to act more just to stay in place.  Stiegler's argument about passivity in consumption also captures something of the present. Although I think Stiegler completely misses the activity in consumption, the blogs, youtube videos, and memes that mash-up and mix the very culture we consume, the videos that combine clips from the latest blockbuster with the latest pop song. These could be described as active passivity, consumption as an aesthetic activity.

The question that remains in the wake of alienation is how to reformulate the frustrations in this activity both in consumption and production, its passivity, and to examine what becoming active might look like today, a becoming active that is more than the motivation of neoliberal work and participation in digital consumption. It is at this point that metaphysics meets economics, or Spinoza meets Marx. Or, framed differently, what would détournement mean today?

Posted by unemployed negativity at 11:38 AM