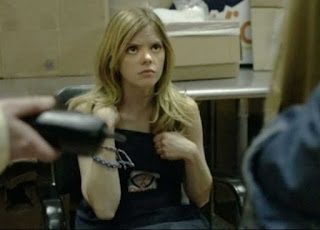 If you have heard about Compliance, you have probably heard one or more of three things about it, that it is based on a true story, that it covers the same issues of authority and obedience that were explored in the famous Milgram experiments, and that the film provoked people to walk out of its Sundance premiere. These three facts triangulate in particular ways, and some might argue that the first two explain, or ameliorate, the third. This is especially true of the claim “Based on True Events," which flashes in bold letters during the opening credits. Veracity functions as an alibi. Horrible things can be shown because they are true.
Read more »
Posted by unemployed negativity at 12:27 AM No comments:

Our Nature is to Change Our Nature: Bertrand Ogilvie and Political Anthropology 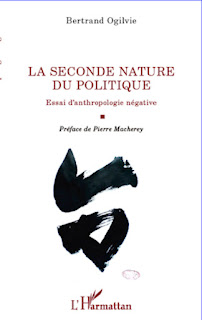 "Nature and education are somewhat similar. The latter transforms man, and in so doing creates a second nature." Democritus

The idea of “second nature” is one of the longest standing philosophemes in the history of philosophy. Its origin can be traced to Democritus’ writing on education and habit and from that point onward it appears quite frequently in the history of philosophy, reappearing in the a long history of thinkers that includes Aristotle, Pascal, and Hegel. Given that the theme often asserts both a default, a lack of instinctual determination, and an excess, the possibility of constituting memory and habits, it is possible to argue that “second nature” is the concept of the human underlying any humanism. As longstanding as the concept is, however, it often functions as that which is implicit in a discussion of habit or memory, rather than an explicit theme. The philosopheme names and enacts a relation between excess and default. Bertrand Ogilvie has broken this trend, placing the concept front and center in his new book, La Second Nature du Politique: essai d’anthropologie négative.
Read more »
Posted by unemployed negativity at 9:57 AM No comments: