Memories of a Ratman: Becoming Animal in Film, Literature, and Philosophy 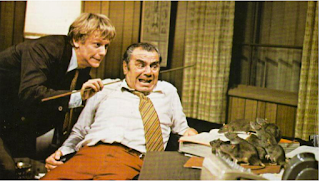 Film has a strange status in Deleuze and Guattari's Capitalism and Schizophrenia. There is nothing like a theory of film in the two volumes; as much as the politics and economics of representation through regimes of signs, synthesis of recording, and assemblages of expression are theorized film is barely mentioned. The two volumes have more to say about television as medium than cinema, which will of course later be part of a two volume study by Deleuze. This is not to say that it is entirely absent, and when film does appear it is not as specific medium to be considered on its own but as an illustration of concepts and problems. Which is not to say that film is marginal these illustrations engage the central conceptual problems in each book. In Anti-Oedipus Nicholas Ray's Bigger than Life illustrates the socio-historical nature of desire beyond  family confines, and in A Thousand Plateaus the film Willard illustrates the concept of becoming animal.

Read more »
Posted by unemployed negativity at 12:19 AM No comments:

In the end of Cinema, Volume One: The Movement Image writes the following about the demise of the movement image:

Certainly people continue to make [movement image] films: the greatest commercial successes always take that route, but the soul of cinema no longer does. The soul of the cinema demands increasing thought even if thought begins by undoing the systems of actions, perceptions, and affections on which the cinema had fed up to that point. We hardly believe any longer that a global situation can give rise to an action which is capable of modifying it—no more than we believe that an action can force a situation to disclose itself, even partially.

It seems to me that Deleuze's picture of the movement image lingering on might be one way to make sense of the superhero film.
Read more »
Posted by unemployed negativity at 11:07 PM No comments: