It seems to me that a fundamental point has perhaps been lost in all of the writing on Deleuze and Guattari’s Anti-Oedipus. Deterritorialization, body without organs, desiring machines, codes, and axioms have been debated, clarified, and discussed, becoming part of contemporary jargon, but the fundamental critique of psychoanalysis has passed by the wayside. This criticism can be summed up as follows: the conditions of the production, and reproduction of subjectivity, exceed the confines of the family, encompassing all of history. That is what it means to be “anti-oedipal” to have a fundamentally different ontology, or ontogenesis, of subjectivity, one that is more materialist, moving beyond the confines of desire in the family. Against the tendency of psychoanalysis to reduce everything to the family, to see father figures lurking behind every boss and president, Deleuze and Guattari explode the family triangle seeing the political and historical dimensions underlying it, to see politics where psychoanalysis see only Oedipus.

“The father, the mother, and the self are at grips with, and directly coupled to, the elements of the political and historical situation—the soldier, the cop, the occupier, the collaborator, the radical, the resister, the boss, the boss’s wife—who constantly break all triangulations, and who prevent the entire situation from falling back on the familial complex and being internalized in it.”

This must be the case not only of those “extreme situations,” the political conflict that cuts through a family, but those situations where Oedipus would appear to be most applicable, where it is just a father and a son in conflict. Deleuze and Guattari demonstrate this in their book on Kafka, arguing that even Kafka’s conflict with his father has to be seen as political. Thus using Kafka to restate their position.

“The goal is to obtain a blowup of the “photo,” an exaggeration of it to the point of absurdity. The photo of the father, expanded beyond all bounds, will be projected onto the geographic, historical, and political map of the world in order to reach vast regions of it: ‘I feel as if I could consider living in only those regions that either are not covered by you or are not within your reach.’ An Oedipalization of the universe. The Name of the Father encodes the names of history—Jews, Czechs, Germans, Prague, city country. But beyond that, to the degree that one enlarges Oedipus, this sort of microscopic enlargement shows up the father for what he is; it gives him a molecular agitation in which an entirely different sort of combat is being played out.”

The best cinematic version of this process, of this blow-up, is perhaps Nicholas Ray’s Bigger than Life. As Deleuze and Guattari write,

"Witness a film by Nicholas Ray, supposedly representing the formation of a cortisone delerium: an overworked father, a high-school teacher who works overtime for a radio-taxi service and is being treated for heart trouble. He begins to rave about the educational system in general, the need to restore a pure race, the salvation of the social and moral order, then passes to religion, the timeliness of a return to the Bible, Abraham...What the film shows so well, to the shame of psychiatrists, is that every delirium is first of all the investment of a field that is social, economic, political, cultural, racist and racist, pedagogical, and religious..."

It is tempting to subject Nicholas Ray’s Bigger than Life to a psychoanalytic interpretation. Paired with the well-known Rebel without a Cause, it functions as a kind diptych: one on the father, the other on the son. Thus it is possible to see each film, which were made in the mid-fifties, right after each other, as completing two sides of an Oedipal triangle. Which is not to say that Rebel is not about fathers. As Ray argues, in that film Jim Stark (James Dean) is searching for some kind of guidance from his father (Jim Backus), who “fails to provide the adequate father image, either in strength or authority.” In fact all of the misfits of the film have daddy issues: Judy (Natalie Wood) just wants her father to love her (perhaps a bit too much) and Plato (Sal Mineo) just wants his parents to be there at all. It is odd that this film, a film that is supposed to document the early stages of a generation of rebellion, is ultimately about a bunch of kids looking for a proper parental relationship. (However, I will leave aside for a moment the question as to whether or not it is possible to extract an Anti-Oedipal reading of that film to focus on Bigger than Life).

Bigger than Life is the story of a schoolteacher in an unnamed suburb, whose life self destructs due to his increased addiction to a drug that he has been prescribed for a rare illness. James Mason, a British actor best known for playing Humbert Humbert in Kubrick’s Lolita, plays the teacher, Ed Avery. This casting introduces a bit of old world class and distinction into the suburban egalitarianism of nineteen-fifties America. A point that is reinforced by the layout of the Avery home, the walls of which are decorated by maps and travel posters of Barcelona and Greece. These posters suggest both the past, the weight of history, and middle class aspirations of travel and luxury. The latter are undermined by the presence of an exposed water heater in the Avery kitchen. The rusty and malfunctioning heater stands out as a kind of Zizekian anamorphosis, a stain that actually puts the whole scene in perspective. We quickly learn that the middle class comfort of the Avery household is just a veneer, Ed Avery works as a taxi dispatcher after school hours to make ends meet. He keeps this secret from his wife, generating suspicion.

Most of the initial clues of conflict are subtle, functioning at the level of casting and sets, demonstrating Ray’s often cited control, but all of this begins to explode, moving from subtext to text, as Avery begins to unravel. His unraveling stems from a drug that he is prescribed to treat a rare condition, a drug that has serious psychological side effects. However, I think that it would be as much of a mistake to see this as cautionary tale about drugs as to see it as an Oedipal drama. The drug is something of a Macguffin, setting the plot in motion. Ray later said that he regretting naming the drug in the film, reducing the crisis of the film to a single knowable cause. As much as the drug sets the conflict in motion, turning Avery into a grotesque parody of paternal authority and middle class aspirations, it is their precarious class position that maintains it. Even as he spirals out of control, his wife refuses to call the doctor for fear of what another medical bill will do to their financial situation, or what the stigma of going to see a psychiatrist will do to his job. Avery’s addiction to the drug sets in motion a spiral of delusion and delirium that crosses through class, politics, and religion.

First, in an initial bought of megalomania, Avery takes his wife and son to a high-end department store. His wife immediately protests this transgression of the class position. The scene that follows prefigures the dress-fitting scene of Vertigo, a man violently demanding that “his” woman look a particular way. Only in this case the ideal is not a melancholic lost love object, as in Hitchcock's film, but a desired class position. Avery’s second noticeable outburst takes place during “parent teacher” night at his school. He refuses to play the faux-egalitarian game of hanging every student’s artwork, of acknowledging that every child is a special little snowflake, and gives a tirade against collapsing standards. As Avery states, “Childhood is a congenital disease - and the purpose of education is to cure it.” Ultimately warning that, “We're breeding a race of moral midgets,” in a remark that will be heard again and again in authoritarian philosophies of education from Plato to Allan Bloom. Half of the audience of parents reacts in horror, offended to hear their children spoken of in such a way, as idiots in need of discipline, while the other half openly embrace the new authoritarian standards.
After this the posters of Europe, of Barcelona at the home take on a new significance: they are no longer symbols of middle class aspirations, but of the possibility of fascism. After the debacle of the PTA meeting Avery returns home, focusing his efforts now on his son--privatizing his desires for discipline and authority. This is arguably the most Oedipal dimension of the film, and the one most caught up in a particular middle class ideal of “wanting a better life for one’s children.” Avery looms over his son in a monstrous scene of parental discipline. When his son fails to perform, fails to become an instant genius, Avery turns to the Bible, specifically the story of Abraham, for parenting advice, deciding that his son must be sacrificed. When his wife reminds him that God stayed Abraham’s hand, Avery declares, “God was Wrong!” With the exception of this last heretical remark, the film prefigures a particular American form of fascism (in Deleuze and Guattari’s sense) based on consumption, family, and the Bible. 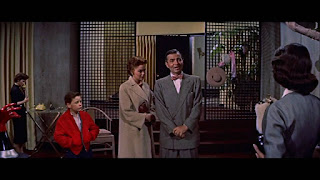 Avery’s blasphemous declaration completes the sequence of megalomania, passing through class, politics, and ultimately religion. Oedipus is blown up until it encompass all of history and the cosmos, revealing its social and political dimensions. What follows in the denouement, the happy reconciliation of the family, can only be understood as the imposition of the era’s ideological demands. What is more important is that the film illustrates that every familial conflict encompasses all of society and history; there is no demand for an authoritarian father without a demand for authority, that every desire for a better future for one's children is the projection of one's own frustrated economic aspirations. Thus, the unconscious is political and economic before being familial and libidinal.

Posted by unemployed negativity at 12:56 PM

unemployed negativity said...
This comment has been removed by the author.
7:05 AM