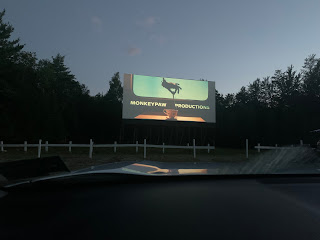 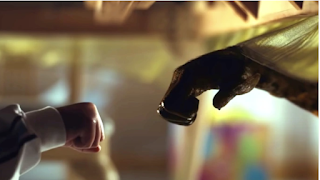 SPOILER ALERT: It turns out that the alien spacecraft is not a space craft at all but an alien monster. It is not sucking people and horses up to probe them or capture them for an alien zoo, but sucking them up to eat them. It is a predator. This is why it was not satisfied with the offer of a horse when it could gobble up the whole audience. It cannot be bargained with, but it can be appeased. OJ figures out that the only way to avoid the alien is to avoid looking at it--to not appear to be a threat. Incidentally this, and not the fist bump, may have been what actually saved Jupe when Gordy went on a rampage. Hiding under the table he avoided making eye contact with Gordy.  Gordy did not spare him because they were friends, but because he did not look Gordy in the eye.
OJ's strategy to photograph the alien creature without looking at it is a strategy that ties together the two themes of the film. First, and most immediately what could be considered the problem of different minds. In order to understand a different creature you have to understand how it sees things differently. A balloon is just a balloon to us, but a different creature might see it as a threat (or as potential food). Second, the difference between legacy and history is the difference of seeing. A legacy unseen, or unidentified is not a legacy at all. The characters of Nope have all been cast out from the spectacle, Jupe is former child star, OJ and Em have a connection with Hollywood history that was never recognized, even Angel, the tech support staff who helps OJ and Em instal their cameras, has been discarded in a way, it turns out his girlfriend  broke up with him when she got cast in a show on the CW. Hollywood, the spectacle eats people and spits them out, not unlike the way a space monster eats people and spits out the undigestible bits of metal like coins and keys. The spectacle of Hollywood doesn't need to hunt its prey. They are all desperate to get their legacy back, to get back into the spectacle, to capture what Em refers to as the Oprah shot, the money shot. However, the spectacle is a monster, it eats people and spits them out. To look at it is to be drawn in, to be eaten up. The only way to capture the spectacle, to get a picture of the creature, is ultimately not to look at it.
Years ago I remember reading that Jordan Peele planned to make three films about social issues. The first was Get Out which is generally recognized to be about race, the second was Us, which I argue can be about class. I am not sure if Nope can be said to be about something in the same way in which the horror is an allegory for some social issue, but at the same time its story of how people cast out by Hollyweood, not a part of its official history, trying to avoid being literally eaten alive by a spectacle. No wonder Peele considers it his most personal film. Peele has managed to somehow create a spectacle, this is his most blockbuster film, without being sucked into its maw.
Posted by unemployed negativity at 10:07 PM