You Will Not Replace Us: On Jordan Peele's Latest 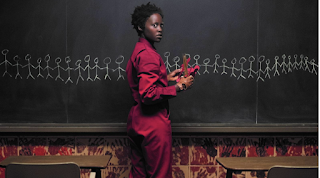 Us is a strange title for a horror film. "Them" and "It" are often the go to pronouns for horror, suggesting otherness and the unknown. In contrast to this "us" is often seen as the familiar, that which is generally threatened by some unknown "it" or "them." "Us" suggests unity not division, familiarity rather than fear, and would in general seem a more fitting title for a sappy romance than a horror movie. That Jordan Peele uses this title for his film suggests how uncanny it is, and how much the divisions between us and them are going to come under scrutiny. Jordan Peele's first film, Get Out hinged on the terror of the realization that one could be betrayed by one's most intimate relationships. While Us works with very different subtexts and cultural anxieties it takes that basic uncanny sense of the foreignness and hostility of what is most familiar to new and more twisted levels.

To begin with Us opens on a forgotten bit of popular culture history. The Hands Across America charity campaign. This idea, and its image, people linking their hands across the nation to address and assist the forgotten and overlooked, to solve the hunger crisis, takes on an uncanny new significance by the time the film is over. Its initial appearance does not just contextualize the opening scene; it is also the first clue about the nature of the film.


Hands Across America appears as part of a flashback that opens the film. Young Adelaide is visiting the Santa Cruz boardwalk with her parents. She gets separated from them and wanders into a hall of mirrors. There she sees something that terrifies her, but it will take the rest of the film for the audience to figure out what it is. The film jumps to the present day, as the Wilsons (Adelaide, her husband, Gabe, and their kids Zora and Jason) are returning to Santa Cruz on a family vacation.

Their vacation is soon interrupted by some odd doppelgängers. An entire Bizarro Wilson family, each like a funhouse distortion of their counterparts, breaks into the house. Gabe asks "Who are you people?" The audience can't help but ask the same question, or at least a variation of it. Who are these new monsters, these doppelgängers supposed to be? How is this film supposed to fit into Jordan Peele's announcement that he was planning to make a series of horror films dealing with social issues? (Not to mention the fact that Peele has assumed the position once held by Rod Serling as the official narrator of the American nightmare). Red, the distorted version of Adelaide answers Gabe's question by stating "We are Americans." Or, as the son, Jason, puts it "They're us."Red explains that her life has mirrored that of Adelaide, but in a twisted way. All of the events of Adelaide's life, her marriage to Gabe, her prince, and the birth of her two children were lived by Red as a form of torture, forced to undergo these things against her will and with much suffering. Everything Adelaide takes for granted, sunlight, fresh air, and some degree of freedom have been denied her double. What one assumes the other desperately craves.

It takes a few more twists to reveal what this explanation means. First, we learn that the Wilsons are not alone in having demented doubles. Their friends the Tylers also have murderous doubles. The film  thens shifts from the subgenre of home invasion horror, films which generally pit a thus against a strange and hostile them, to a broader "doppelgänger apocalypse" as it is revealed that all of Santa Cruz, and perhaps even the entire country is under attack by these uncanny doubles. They emerge from hidden tunnels, sewers and other forgotten places, kill their doubles, and then in something that is referred to in the film as "strange performance" art, they join hand to bloodied hand across America, a dark and twisted remake of that forgotten bit of eighties feel good trivia.

Red, the bizarro Adelaide, refers to the doubles as "the tethered," explaining that they are part of some forgotten attempt at social control. This attempt has long since been abandoned and the tethered were left in vast underground bunkers doomed to live out lives that are twisted pantomimes of the real world above. In one of the film's best visual sequences we get a return to Adelaide's initial visit to the Santa Cruz boardwalk. Only now it is intercut with her double walking through the massive underground bunker. We see people playing games, riding the roller coaster, sharing food, doing everything people do at the boardwalk. We also see their doubles go through the same motions, only without the necessary props of roller coasters, tilt-whirls, or wack-a-moles. Deprived of the necessary props, the necessary context and coordinates, the same actions look disturbing and unnerving, like something from a madhouse.


Peele's use of the Santa Cruz boardwalk is significant not just because it gives us such unnerving locales as halls of mirrors necessary to a horror movie but because boardwalks, carnivals, and other vanishing bits of American culture are places where people of different classes, different races, and so on come into contact. These public spaces are places where the comfortable middle classes come face to face with the very people that they otherwise go to great pains to deny even exist.

This brings us to the final revelation, the final twist of the film. Adelaide's horrifying memory from the eighties that opens the film was not just that she encountered her double, encountered Red in the funhouse, but that they switched places. Or, more to the point, Adelaide was dragged to the underworld below and Red took her place, eventually becoming the relatively happy and successful woman who cares for her kids and loves her husband. The real Adelaide has been trapped beneath ground all along, planning her escape, planning a revolution. Us plays out like the darkest possible remake of The Prince and the Pauper, of two identical people who switch places. The tethered are oppressed and marginalized to the point of being the stuff of nightmares, and because of their oppression they hate those of us who walk in daylight, breathe fresh air, and go on vocations with a murderous passion. They hate us, but also are us. If things were reversed they would fight desperately to retain their privilege and we would struggle to overturn things, to find our place in the sun.
I have seen many reviews referring to Us as a more straight forward horror film, free of the social political subtext that defined Get Out. I think that they could not be more wrong. The way I see it, and if I had to answer the question, "What is Us about?"or "Who are they?" I would say that it is about the realization that our way of life, our vacation homes, boats, and Alexas, are ultimately unjustified. That as much as "we," the people who have the time and luxury to read blogposts about major motion pictures, tell ourselves we are better than them, than those that we would prefer to keep in the darkness, that we have earned our place in the sun with our hard work and righteous living, the only real difference between us and them is the social system that necessarily divides us from them. That is the real horror. As the old saying goes, "we have met the enemy and they are us"

The more I think about this film, and I have been think about it a lot since I first watched it, the more I think how much of it hinges on gesture and comportment. Many have noted how well Lupita Nyong'o, Winston Duke, Shahadi Wright Joseph, Evan Alex, and Madison Curry etc. use gesture to embody different characters. However, it also seems to me that Jordan Peele deserves credit as an observer and director of gestures, something that makes sense coming from a comedy background. This is something that could already be seen in Get Out. Giorgio Agamben has argued that film is about gesture. Gestures, ways of walking, sitting, standing, etc. are after all what film as a medium made it possible to convey. As Agamben writes "The gesture is the exhibition of mediality: it is the process of making a means visible as such. It allows the emergence of the being-in-a-medium of human beings and thus it opens the ethical dimensions for them."

In Us we are constantly confronted with gestures that differentiate people, but also the same gesture presented in different context and situations drawing out different implications. Gestures identify and differentiate. The difference between the normal and the doppelgänger, is found in the way they walk or move. As Gabe Winston Duke moves with an affable and laid back comfort--a "dad bod," but as Abraham, as the tethered, the same body becomes a lumbering monstrosity. The tethered do not just differentiate themselves through comportments they also imitate the movements of the people they resemble. As I indicated above, however, we are also confronted with the same gesture in different contexts and situations. We see a flashback of  young Adelaide's dance performance (actually Red), but we also see the same performance taking place in the austere institutional setting of the underground bunker where the tethered live. A space that looks like a nightmare version of an insane asylum. The pirouettes of the dancer on the stage become a psychotic spinning when placed in a different situation. Artistic expression becomes the manifestation of madness. As Spinoza argued the same gesture, raising my fist and extending my arm in the case of throwing a punch becomes something very different in different situations. Or, in the case of the film, killing someone with an outboard motor can be a source of either horrified screams or celebratory cheer depending on how we perceive the context and motives of the one doing it. Or, to go back to the film's political subtext, the actions we do to get by in this world, to create a better life for our children, look very different depending on what side of the class divide we occupy.
Posted by unemployed negativity at 5:15 PM

Mongo, At The Moment said...

Can't think of a more apt or prescient plotline to depict the Elephant in the room of America.