Indiana Jones Versus the General Intellect 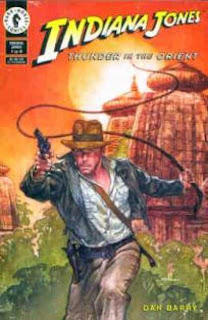 If one wanted to be generous to Indiana Jones and the Kingdom of the Crystal Skull one could say that it tries to continue the self-reflexive nature of the previous films. Whereas the early films represented the 30s and 40s through the lens of the serials of the time, the current film represents the 50s through the conventions of a 50s B-movie, complete with the atom bomb, greasers, the red scare, and flying saucers. It does not go far enough in this direction, however, or, more to the point, it is hindered by Lucas and Spielberg’s desire to become caricatures of themselves.

One thing that has characterized Lucas’ filmmaking since the prequels is this relentless desire to connect all of the dots; the prequels find it necessary to present the origin of everything, from Boba Fett to Chewbacca’s uncle. The current film is burdened by filling in the loose ends to the point where we know not only that Marcus Brody (Indiana Jones’ colleague) is dead, but also that he became dean of the college before dying. From the very beginning Speilberg’s films were almost always family romances, the reconciliation of the family through some external event, aliens, dinosaurs, poltergeists, etc. In the latest Indiana Jones film this becomes incredibly literal and over the top. So much of the film is driven by these rather uninteresting subplots.

The Indiana Jones films have always been on some level about the politics of knowledge. First, there is the “Orientalist” narrative in which only the West can comprehend the secrets of the ancient kingdoms of Egypt and Central America. The living denizens of the various exotic locales do not even have a clue what treasures lie beneath them, let alone how to find them. Only Indiana Jones can unlock the secrets of the ancient tombs (it is only a tragedy that he does not speak Hovitos.) Second, there is also often a quasi-religious idea of humility in the face of the divine, a warning not to disturb the Ark.

In the Kingdom of the Crystal Skull this gets shifted a bit. First, because the villains are now Communists rather than Nazis, so the plot of the first and third films, Hitler’s desire to turn religious artifacts into weapons, is absent. Second, because the object in question is now secular, an alien skull, rather than sacred. This leads to a very muddled final scene in which the communist villain points out that aliens have a hive mind. She latter is killed by her desire to “know everything.” In some ways this reproduces the end scene of the first film. Aren’t all sequels secretly remakes? This is where the film missed its mark, and could have really developed the anti-communist message. Given that the film dallies with the rumors of Stalinist psychic experiments, the film could have developed the hive mind versus individualistic knowledge. This also would have allowed for the film to develop the rather tacked on middle section about McCarthyism into something. It could have pitted Indiana Jones, the representative of western knowledge (of its others) and "free inquiry" against the collective intelligence of the soviets/aliens.

Posted by unemployed negativity at 9:52 PM No comments:

I will admit from the beginning that I am not a Lacanian. I am minimally competent in Lacan. I have read him, sure, the selections from Ecrits, The Four Fundamental Concepts, and even The Ethics of Psychoanalysis, but all of that was along time ago. Nowadays I tend to avoid him not out of some fundamental disagreement but more out of an acute awareness of how much work it would take to actually engage Lacan again.
So it was with some trepidation that I picked up A. Kiarina Kordela’s $urplus: Spinoza, Lacan. Not that I think that the project of the book is totally unfounded. As the book suggests on the first page, Spinoza’s groundbreaking concept of immanent causality has, especially since Althusser’s invocation of it in Reading Capital, been inseparable from the concept of differential causality. So, perhaps, the encounter between Spinoza and Lacan has been a long time in coming.

The book takes as its central point of interpretation Spinoza’s difficult remark in Ethics II Prop 43, “As the light makes both itself and the darkness plain, so truth is the standard both of itself and of the false.” Kordela sees this statement as the basis for a contradiction in Spinoza’s thought. A contradiction between Spinoza’s ontology, which subordinates every final cause to a series of efficient and ultimately immanent causes (we call good what we have been determined to desire), and the requirements of human action that necessarily require some goal, some final cause. In Kordela’s Lacanian terms this becomes the necessity of a fiction. Thus to return to Spinoza’s somewhat puzzling statement, truth’s relation to its opposite, the false, becomes a matter of intimate interrelation. Truth is structured like a fiction.

Kordela illustrates this through Deleuze’s retelling of the story of the fall of Adam and Eve. As Deleuze stresses it is incoherent to think that God forbid Adam to eat the apple; rather it is necessary to understand the apparent injunction as a simple statement of causal effect—“in the day that you eat of it you shall die.” Kordela argues that Spinoza (and Deleuze’s) contradiction has to do with living and dying as ends, as final causes, the former of which is more desireable. What Spinoza (and Deleuze) overlook according to Kordela is the unavoidable nature of the final cause, the unavoidable nature of a fiction. This criticism seems to miss the mark on several points. First, Spinoza addresses this “contradiction” in the preface to part four of the Ethics. As Spinoza argues despite the fact that good and evil indicate nothing in terms of things, tell us nothing about the world, it is necessary to retain these terms practically, with respect to some model or ideal of existence, an ideal that necessarily contains living. More to the point, Kordela’s general criticism that Spinoza fails to recognize the “cognitive dimension” of fiction seems to overlook the status of fiction, or the imaginary in Spinoza political works as well as the Ethics.

Those are the books limitations. The books strength lies in the way in which it reinterprets immanent causality, drawing lines connecting Spinoza and Marx. What Kordela focuses on is the tripartite structure in which Spinoza immanent causality is God (or Substance) expressed in terms of the modes of thought and extension, three terms in which the first exists only in its differential articulation into the other two. The equivalent of this in Marx is Surplus value which exists only in the form of exchange values, which are taken as signs, and use values, objects of utility. (The order and connection of ideas and things.) The structure of being is as follows according to Kordela…1) being as the imaginary univocity of abstract thought, that is, as simulacrum (exchange value or signifier); 2) Beings as the multiplicity of beings (use value or physical beings); and 3) the primary, transcendent, yet immanent, differential (non)-substance that at once institutes the above duplicity and is the effect thereof (surplus).”

I have to say that there is something clever about this idea of surplus value as substance, as substance that exists only in terms of its effects (which are also causes). First, it is not something that I would have thought of, and it does an interesting job of drawing together Spinoza and Marx’s insistence that thought is part of the world. Secondly it insists on an ontological dimension of capital, capital transforms being. It is this last point that is also a bit vexing, as much as the author suggests that an immanent ontology de-ontologizes ontology, rendering it historical and worldly rather than transcendent, it is hard to see this as nothing other than a fixed structure in which only the slots change. There would then be different surpluses, different excess immanent elements, from God to capital, structuring the relationship between thought and being. I would argue that this immanent ontology is not immanent enough, it must take the turn (arguably) that Spinoza’s work takes in part three and four of the ethics, turning towards desire, affects, etc. So much work needs to be done in understanding the intertwining connections between capital and desire. What the book ultimately lacks is something that Fischbach’s book does well articulating, is a connection between Marx and Spinoza at the level of practice, at the level of their concepts of labor and conatus.

Posted by unemployed negativity at 4:43 PM No comments:

Summer Subtext: Only a Billionaire Arms Dealer Can Save Us Now 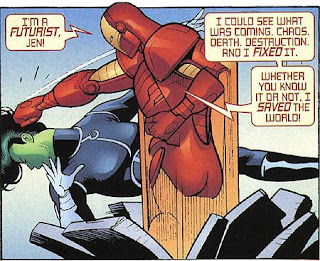 For the past few summers it seems that every blockbuster film has made some kind of oblique and often lazy reference to the "war on terror." There were references to secret government agencies operating outside of the law (The Bourne Ultimatum), to the difficulty of sustaining an occupation (28 Weeks Later, War of the Worlds), to the politics of fear (Batman Begins, Land of the Dead). This seems fitting, since the "war on terror" is itself a fiction sustained by fictions.

So this afternoon, when I went to see Iron Man the start of the summer blockbuster season, the question lingering in the back of my mind was one of subtext. (I am not totally sure why I saw the movie. An afternoon of grading may be the biggest motivation, but I was also curious to see how a film about a second rate comic book character ended up getting such rave reviews). As a work of ideology the film offers much to work with, terrorism, American exceptionalism, militarism, racism, etc.

It occurred to me at some point during the movie that superhero movies are not so much governed by specific ideological content (nationalism, militarism, etc) but by the form of ideological interpellation itself. The central drama concerns the question of belief or purpose, some kind of final cause. To put it in Aristotle's terms, the films often deal with the disjunct between the final cause, the purpose of the hero, and the efficient cause, the power, skills, or gadgets that make it possible to fulfill the cause. Sometimes the final cause comes first, as in the case of Batman, in which case the hero's origin is a search for the tools and skills necessary to complete the cause, and sometimes the efficient cause comes first, as in the case of Spiderman, and the hero's origin concerns some kind search for a purpose or meaning. Iron Man fits in the latter category, Tony Stark is immediately presented as a man with skills but no purpose other than the hedonistic pursuit of pleasure, in that way he stands in for the general subject of consumer capitalism. The hero's journey is complete when the causes come together, when powers find a purpose. Superhero's are almost defined by their purpose, their bit of ideology, Spiderman's "with great power comes great responsibility" and Superman's "truth, justice, and the American way." (Of course one would want to make a distinction between these two ideologies, but the point is that the ideology, the cause, is as central to the character as the costume.) Thus, one could argue that the appeal of the superhero film is not just in watching someone with amazing powers, gadgets, or skills, but in watching someone with a purpose, someone who believes. The superhero film does not so much interprellate its audience with an ideology, but with fantasy of truly believing in an ideology.