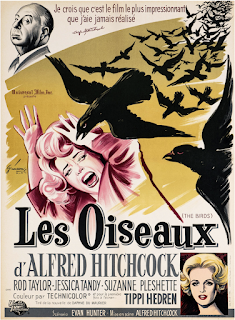 In his conversations with François Truffaut Alfred Hitchcock insisted that the birds in the film of the same name had to be ordinary birds, seagulls, ravens, sparrows, and not the more spectacular, and arguably more frightening hawks and eagles. This particular anecdote is relayed in Fujita's Le Ciné-Capital and in some sense it functions as the lynchpin that connects Deleuze's understanding of film, Marx's understanding of Capital, and revolutionary politics.
Read more »
Posted by unemployed negativity at 7:11 AM 6 comments:

Are Geeks Born or Made: On Nightmare Alley (movies and the book) 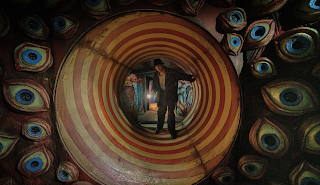 Let us start with a general question: why should someone interest in philosophy also be interested in film? Granted there are probably as many versions of answers to this as there are philosophical perspectives and orientations. To propose an answer from my, Marxist-Spinozist, perspective is that what is instructive about film is the relationship between the immediacy of their reception and the mechanisms of their construction. In other words, a film is experienced intensely, as fear, joy, sadness, disgust and even boredom, this is its immediacy, but to some extent it can also be viewed in terms of how those reactions are created, how images, sounds, dialogue, and music create these effects. Viewed this way film is not different from other art forms, literature and music could be discussed the same way, but what distinguishes film is the way that this production is both effaced and traceable. This distinguishes it from literature: a reader will perhaps always be able to find the relevant sentences and passages that produce effects on them, might even quote them, but the intensity in the reception of a film is not related to any understanding of its composition. It also distinguishes it from music in that knowing how music is produced requires something of an education in music, but to delve into the construction of the film one often only needs the pause button.
Read more »
Posted by unemployed negativity at 7:28 AM No comments: