Get Meta With Me: On Matrix Resurrections

The Matrix is a film about work. Long before Neo escapes the matrix he has to break out of a much more mundane space of confinement, the office cubicle. The film is thus part of that odd series of films that came out in 1999 that were about the confines of the cubicle and the working day, a list that includes Office Space, Fight Club, and American Beauty (and Being John Malkovich). It was an odd year, in the midst of the dot-com bubble and the Clinton third way, a year that on the surface was good for capitalism, the movies were telling a different story, a story in which work and the office was sucking the life out of people. An idea which The Matrix made literal in its dystopian future of energy sucking pods, in other words, cubicles 2199. 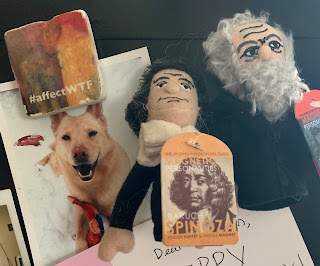 My Spinoza and Marx finger puppets
This is a follow up to a few previous posts, most importantly my previous post on alienation in Marxist-Spinozist Thought. It is also an effect of my continuing work translating Franck Fischbach's La Production des hommes: Marx Avec Spinoza. I have never translated a whole book before and the experience is a little like some kind of possession or mind meld, in the best possible way, where I find myself thinking in and through another person's writing. Of course this is often the case when writing on someone, but translation takes it to a different level. To update a hierarchy familiar to a lot of people, there are books that I have read, books that I have read and taught, books that I have read and written about, and now, standing above the rest, a book I have translated.
Read more »
Posted by unemployed negativity at 5:51 PM No comments: 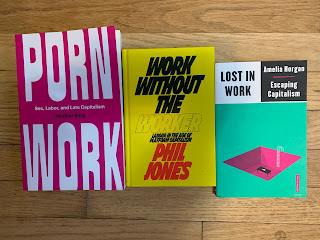 Because I regularly teach a class on work, and have my own book on work coming out, I make it a habit to keep up on all of the writing on work, from theoretical studies and polemics, to ethnographies and studies of contemporary political economy. It is getting to be quite a lot to keep up with, what seemed like a slow trickle a decade or so ago when Kathi Weeks The Problem with Work came out, has become a steady stream of books. Perhaps this is a sign of changing ideas about work, but at the very least it means that there is a lot to keep up with in reading critical studies of work. What follows is a short review of three of the recent ones.
Read more »
Posted by unemployed negativity at 11:50 AM No comments: