Ideology Interpellates Subjects as Individuals: on Dean's Crowds and Party 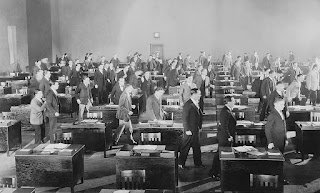 Image from The Crowd, King Vidor


Jodi Dean's Crowds and Party can be understood to have two objects, each identified by the words in its title. First, it is an argument against the individual, the individual form, arguing that the individual is the kernel of contemporary of contemporary ideology, resurfacing even in those practices that would escape it. Second, it is an argument for the party, for a revival of the party form. The party is Dean's answer to the question that runs through several of Verso's books this fall, how to reproduce,  sustain, and maximize the occupations and protests that have become part of social space. Dean's party then takes its place alongside Clover's commune and Jameson's universal army of dual power.

Read more »
Posted by unemployed negativity at 1:44 PM No comments: