Welcome to Bizarro World: Part One 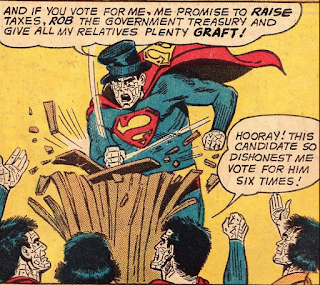 Lately, I have been thinking of Bizarro World. This is odd since I never really read many Superman comics growing up. I was mostly into Marvel comics. What I know of Bizarro world comes mainly from watching cartoons and the general cultural osmosis, despite being an obscure comic book character Bizarro even made it onto Seinfeld. What has provoked me into thinking about it is not the cultural history of the term, but its contemporary relevance. We seem to be living in an inverted world of sorts: capitalists call themselves workers, white supremacists claim to be an oppressed minority, and so on. Everything seems upside down and backwards.

As much as Bizarro world functions as a fairly accurate description of the present, capturing some of the absurdity of the world it remains to be seen how it can go beyond a description. How can Bizzaro World become a concept and not just a description. Of course inversion has a long history in theories of ideology. The camera obscura is ideology's founding metaphor in The German Ideology. In that manuscript Marx is more concerned with the inversion of the relation between ideas and material conditions explaining how it is that it appears that consciousness determines life rather than the opposite. German idealism is the pinnacle of this inversion. One of the central limitations of The German Ideology is that it is more concerned with settling accounts with philosophical consciousness than developing a comprehension theory of ideology.

The German Ideology is not the last word on inversion. Throughout Capital one can sketch a theory of the inverted relation between worker's and capital. (I have written more about this here). There are two components to this inversion. First, the increased socialization of work and the technological development of the labor process obscures the worker's productivity from them. As Marx writes,

Capital rather work appears to be the true productive force. This inversion emerges from the production process itself. It is not a ruse of the ruling ideas, but an after-image of the production process. Simone Weil anticipated this inversion in the first half of the twentieth century. As she writes of the increased automation of work. "Generally speaking, the relation between work done and money earned is so hard to grasp that it appears almost accidental, to that labour takes on the aspect of servitude, money that of a favor" The inversion of the camera obscura is just an effect of optics, not a trick after all. However, it only tells part of the story, how the workers fail to see themselves as productive, attributing the productive power to capital. It does not yet tell us how the capitalist becomes the true worker. On this point the narrative Marx constructs does have something to offer: the increased socialization and automation of work introduces the manager as a necessary component of the production process.  The workers are actively stripped of any knowledge of the production process, and are increasingly alienated from it, and thus the capitalist is no longer just an owner, just a formal condition of the production process, but becomes a material condition.As Marx puts it, "That a capitalist should command in the field of production is now as indispensable as that a general should command on the field of battle."

This brings us almost there, but the inversion cannot be explained by solely looking at the changing technological and social conditions of labor. There is a necessary cultural supplement as the capitalist takes on more of the image of the worker. It is not just that the capitalist, or his or her representative becomes a part of the production process, but that the capitalist takes on the values and norms associated with work. What capitalist does not claim to work harder than their workers, citing their hours spent in the office as the justification of their profits? Their work, the work of the capitalist, becomes the true work; its risks are greater, as are its rewards, and thus it demands more, more of an ethic of dedication, and more skill. The deskilling of work has its corollary the elevation of the image of skills of capitalists and investors. As Etienne Balibar states in his contribution to Bizarro theory, “The capitalist is defined as worker, as an ‘entrepreneur’; the worker, as the bearer of a capacity, of a human capital.” We do not admire craftsmanship or the skill in producing things much anymore since nearly everything is churned out by machines, but we have elevated the work of investing into a new alchemy, while jobs have often been reduced to bullshit. 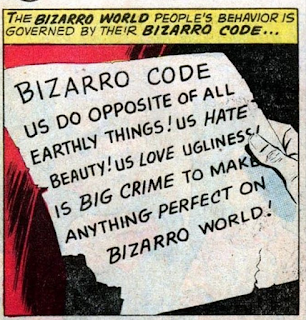 The inversion also rests in part on a series of homonyms. Work is said in many senses, and the time spent in the corner office is not the same as the time spent on the factory or shop floor: risk is a fundamentally different word when one risks one's life, one's time developing knowledge or skill, than when one risks capital, money. The Bizarro world is one of both inversion and identity. The boss that claims to be the true worker, who drives to work in a truck, wears carhart, and obscures any sign of class privilege behind a series of carefully chosen class signifiers acknowledges while obscuring the role of work in producing value. Or, maybe more to the point, what is espoused is work's cultural value, and not its economic role. This is what I have described elsewhere as "right workerism," which can be described as claiming and espousing the values of work as discipline while simultaneously devaluing its economic status, stripping it of protections and the social conditions necessary for its existence. As every comic book fan knows, inversion is tricky business; there is always a kernel of identity in every inversion. The Bizarro world reflects in its own distorted way the true world.

This is in some sense of account of the inversion of the economic world, of a world where workers are reduced to investors in human capital and capitalists become job creators, the true creators of wealth and society. This inversion is not equal in all instances, and one of its strangest characteristics is that those who work the most, who are hyperexploited, such as undocumented workers, are most often presented as lazily scrounging benefits. It is at this point that Bizarro theory, if it is to be a theory, goes beyond its economism, its reversal of work and capital, and becomes a way of looking at power relations in society. More on this in Part Two.
Posted by unemployed negativity at 12:39 PM