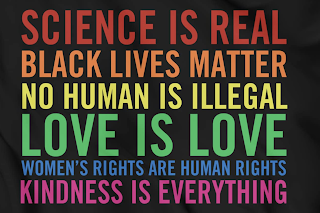 Don't worry I will explain why I picked this image

This post is an immediate follow up or even sequel to an earlier post on Spinoza and conspiracy theories. In a more oblique way it is also a follow up to something that I have said repeatedly on this blog, that not only is there more to Hegel's Phenomenology of Spirit than the master and slave, but that other dialectical scenes or figures can also be wrested from the linear progression of Hegel's thought to become the basis of social and political criticism. Kojeve can't have all of the fun.

One such section is the dialectic of enlightenment and superstition. In some sense this is a dialectic of a fundamental misrecognition. As Hegel argues superstition and enlightenment, or faith and pure insight, are, as pure consciousness, more identical than they would admit. They are differentiated only in terms of their form, in the former it is thought without concept, religion remaining only a picture thinking of the absolute, while in the latter it is pure consciousness of the self.
In some sense the enlightenment begins from the perspective that superstition is fundamentally deceived about the object of its faith, stressing the non-identity of what it claims to believe and the truth of this belief. Religion is something other than what faith claims, having a different history and politics, The Enlightenment sees the distortions and deceptions of priests and despots beneath its proclamations of faith. However, this deception, a deception that makes religion an object of control in some sense distorts the enlightenment's own conception of faith. It understands its proclamations and rituals to be nothing other than fallacious statements about the nature of things. "Accordingly, it says of faith that its absolute essence is a piece of stone, a block of wood with eyes that do not see, or else that it is something made of bread-dough obtained from the field, which, when transformed by men, is then returned there." The enlightenment turns the customs and habits of faith into erroneous matters of fact, reminding it that bread is just bread, not the body of Christ, and the cross is just wood.
The Enlightenment makes faith into its own image, makes its actions, actions of belief, into statements, statements about the actual world that can be disproven. This is the criticism of every atheist who states the impossibility of a global flood, of fitting the animals onto an ark, and so on seeing in religion nothing other than bad science and poor history. For Hegel faith should refuse such claims, recognizing that its true object, its true insight, is something more than facts of astronomy and zoology.  It is tempting to argue part of our contemporary dialectic of the enlightenment is that modern faith has taken this misrecognition as a challenge, and has tried to prove well if not the authenticity of the body and the reality of the cross then the reality of the bible's story of creation. 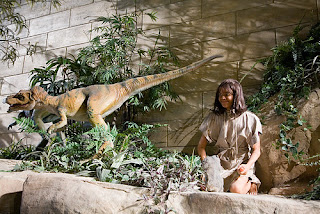 The Creation Museum
It is worth pausing for a minute and asking what drives this particular dialectic, this particular identity and difference, as faith and enlightenment become their opposites, or see themselves as identical even as they are opposed. Etienne Balibar offers the following explanation in his book on universals, possibly his most Hegelian book, First, as Balibar describes the general structure of the Phenomenology:"The enunciation of the universal (and, as a consequence, its inscription, its institution, its historical realization) immediately entails its transformation into its opposite (the particular, the contingent) or the production of its negation." (I should add that it seems to me that this is a very Spinozist way of framing things, the universal is always tainted by the particular). As Balibar describes the particular trajectory of the enlightenment in the passage in question, "The more it turns the universal into a pure rational form (a form of "pure reason"), the more it relies in reality on anthropological postulates, on an image of man and the human that suppresses a whole unconscious portion of itself and, as a consequence, the more it relies on the presence of an unsaid within itself."
The universal reveals the particular within itself the more it totalizes, the more it tries to present everything according to its logic. The contemporary version of this, the modern "dialectic of enlightenment" that could be suggested here, one that is not without its relation to the book of the same name, is one of two competing totalizations. In the first, faith remakes itself in the model of the enlightenment's critique, turning biblical narratives into the basis for "intelligent design" and theories of "young Earth." Faith becomes science. The reverse would seem to be equally true, science increasingly turns itself into a faith of sorts. One counters the ichthys, "Jesus Fish" with their own Darwin Fish. On the one hand there is a faith that recognizes that faith is not enough, that in in order to vanquish its enemy, the secular world view, it must beat it at its own game becoming science. On the other there is a science that strives to have the same relation to identity as faith does, to become a world view and not just knowledge. Each tries to win by playing by the other's rules.

I want to be careful about this point, because accusation that a given group treats something, some idea, as an object of faith, or religion, is one of those crude sorts of criticism that one hears all the more in that it is so imprecise. Not only does it not clarify how, and in what way, something is being treated as religion, often making that word synonymous with dogma and authority, it too has its own odd dialectic in that it seems to imply that treating something as religion is bad so long as what is being treated this way is not religion proper. It is also worth pointing out that this criticism, which is really the criticism of fanaticism, has as assumed norm the idea that one should not take things too seriously or with too much conviction. Ours is an age of flexibility and opportunism.
Nonetheless, it still seems possible to say that science, an idea of science, has become something like an object of faith. When people say that "Science is Real" or that they "Fuckin' Love Science" they are expressing not so much a specific point about this or that scientific discovery or the scientific method. What they like could be referred to, following Althusser, as the spontaneous philosophy of science, the amalgamation of "neato facts," secularized wonder, and vague confidence in progress that makes up a certain image of science. We could say, following Althusser that science cannot become an identity, cannot become a subject, or if we wanted to be Badiouian about it, we would say that such fidelity is only possible with respect to a specific scientific discovery not science as such, which at the level of generality can only be an ideology.
In this rough updating of the Phenomenology I am turning to the two things that we return to Hegel for again and again; namely, the identity and difference of contradiction. The way that ways of thinking not only define themselves by opposition but in doing so begin to take on characteristics of their opposition. Faith becomes science and science becomes a kind of faith. It seems that the worst thing that one could do in this age of anti-enlightenment, an age defined by conspiracy theories and pseudo-science, would be to turn to science as an object of faith. One of the risks of the proliferation of such theories is that it would make an uncritical turn to the authority of science, as well as other authorities, tempting.  The misguided skepticism of conspiracy theories creates the oddest dogmas of traditions and institutions. One counters the faith in conspiracy theories with a faith in not only science in the abstract, but the existing institutions of expertise. 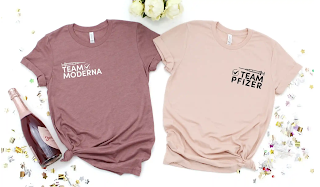 The very worst version of this is to be found in the celebration of Pfizer and Moderna as if they were dueling houses from Harry Potter and not multibillion companies who have not only benefited immensely from the pandemic but have in some sense perpetuated it in maintaining profits over distributing vaccines. I know that this is not really a conclusion, and there is a lot of dots left to connect between "Science is Real" and "Team Pfizer" but they seem part of the same process, or at least they both really bother me.
Posted by unemployed negativity at 11:02 PM