You Incomplete Me: Marx and Hegel in Balibar’s Des Universels 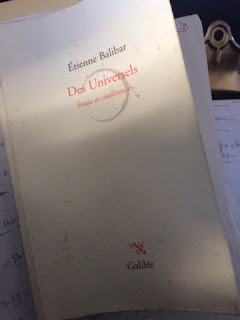 “What Hegel calls consciousness, or, more to the point, consciousness of the universal, Marx calls "ideology." It is the same thing, and yet this change of denomination, like the deus sive natura of Spinoza (conscienta sive ideologia, I propose), carries with it the possibility of saying something new, or bringing it to the foreground.  And at the center of debate is the part of unconsciousness constantly rejected by Hegel at the limits of the phenomological field”Etienne Balibar

I have early noted an increasing turn to Hegel in Balibar’s writing both here in this blog and in an essay that will be published here. The recently published Des Universels completes this turn, while also making it clear that as much as Balibar often lists Hegel as a transindividual thinker, his interest in Hegel has less to do that particular problem than with the problem of universals. Spinoza might be the preferred thinker of the transindividuality for Balibar, but Hegel is the thinker of the universal.


What is far more interesting, however, is that Balibar turns his attention to the later sections of the Phenomenology, especially the discussion of faith and the enlightenment, and the figures of "Culture." These two can be read as figures of the universal, or figurations against its form. As Balibar writes, "The desire to announce the universal...or to give it a name, or formulate its principles...is always already to particularize it." The very attempt to figure the universal, and there can be no pure form of the universal without some figuration, necessarily limits it. This can be seen clearest in the section on "Culture" which can be seen as not only the conflict between two instantiations, and institutionalizations of the universal, but the consciousness and conscience associated with each.

Hegel’s scenario presents us with two individuals, or individuations, the first is dedicated to the service of the state, the second to wealth. The conflict has to do with the way in which universality and particularity appear in each activity.  At first it would appear that service of the state is ‘simple substance’ and ‘universal work,’ a work in which individuality is suppressed in favour of the immediacy of the universal. Wealth is the reverse of this; the enjoyment of the individual is immediate. As Hegel indicates, however, prefiguring his engagement with political economy in the Philosophy of Right, the pursuit of self-interest through work cannot help but ‘produce universal labour and enjoyment for all.’ Similarly, the selfless dedication to the state, to the universal interest, can appear as nothing other than the pursuit of one’s individual interest. The duality of individual and universal, the individual in the universal and the universal in the individual, is not how things appear, however, to the particular consciousness involved. For each of these figures of consciousness one appears as good the other as bad. It is always possible to see each of these actions in antithetical ways: state power can appear as the true universal, or as an oppressive and indifferent rule that suppresses every individual, wealth can likewise appear as either universal activity or selfish interest. It is possible to see in each of these activities either the universal or the individual, either something ‘good’ something through which subjectivity can recognize itself or something ‘bad’ hostile to itself and its interest.  The duality of the action concerned, wealth and state power as individual or collective, contrasts sharply with the singularity of the judgment, thus making it possible to see a critique of moralizing understanding of action, framed in terms of the good and the bad, individuality or universality. In the passage on ‘Culture’ in question the simple opposition between state service as good and wealth as bad, or vice versa, eventually gives way to two different figures of consciousness: the first, the noble consciousness, sees the universal, or the identity of self and universal in every action, while the latter, the ignoble consciousness, sees only difference, the rift between the individual and the universal, the corruption of every action. Universalization confronts universalization and sees its own particularity reflected. (I pulled a Zizek here, dumping a huge paragraph from The Politics of Transindividuality)

Up to this point Balibar's reading of Hegel echoes what he develops in (the recently translated) Citizen Subject, which focuses on precisely this internal limit, on the structural impossibility of the universal of the universal. This impossibility is given in different forms, in the different figures of spirit, which pit universal against universal, and in the texts own double formulation of the spirit, defined as Ich das Wir, und Wir, das Ich ist” or “I that is We and We that is I, and “ and “das Tun aller und Jeder” or “The work of all and each, ”as recognition or activity, as figure and figuration.

Des Universels adds to this Marx, and ideology as universal. Ideology is a process of universalization, Marx would say of the ideas of the ruling class. Balibar had earlier corrected this in "Three Concept of Politics," writing, "domination by an established order does indeed rest, as Marx argued after Hegel, on the ideological universalization of its principles. But contrary to what Marx believed the dominant ideas cannot be those of the dominant class. They have to be those of the dominated…”This is in some sense the Machiavellian moment of ideology, the point where the ruler appears to be "of the people," the dominantor appears to be governed by the same rules as the dominated, the same religion, the habits, and ideas. The most immediate example, at least for us Americans, is the parade of presidential candidates outdoing each other in their appearance of folksy common values every election season. Machiavelli argued that every politician must  be both animal and man, show the strength of a lion and the cunning of a fox, but he neglected to add that he or she must also have the stomach of a raccoon to ingest chili cheese dogs and fried butter balls. 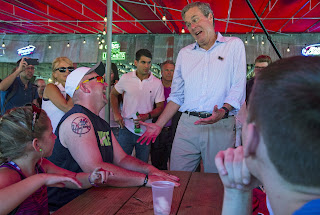 "The sphere of circulation or commodity exchange, within whose boundaries the sale and purchase of labor-power goes on, is in fact a very Eden of the innate rights of man. It is the exclusive realm of Freedom, equality, and Bentham. Freedom, because both buyer and seller of a commodity, let us say of labor power, are determined by their own free will. They contract as free persons, who are equal before the law…The only force bringing them together, and putting them into relation with each other, is the selfishness, the gain and the private interest of each."

This can be considered another way in which Marx "incompletes" Hegel, to use Balibar's term. In place of the conflict between universals, the universal of the state and that of the market, there is the circuit in which the spontaneous ideology of market exchange is reinforced by the dominant ideology of neoliberalism, the experience of searching for a job is reinforced and expanded by an ideology of job creators. The tragedy of universal confronting universal, of a progress from universal to universal, as particularity is shed, is replaced by the farce of capital as the only true universal. (incidentally, this similar to conclusions that Jameson reaches about the recognition of the market in his book on Hegel) To end with something a little more than a pithy reformulation of everyone's favorite sentence to rewrite, it seems to me that any political project that is waiting for the return of some kind of good universal against the false universal of the market, some return of civic consciousness, of truth in media, or the nation, is waiting for a good conscience that will never come. Revolution is the name for a universal, a common, which must be created rather than recognized.
Posted by unemployed negativity at 9:28 AM