The Ideology of Norms: On Macherey's Le Sujet des Normes 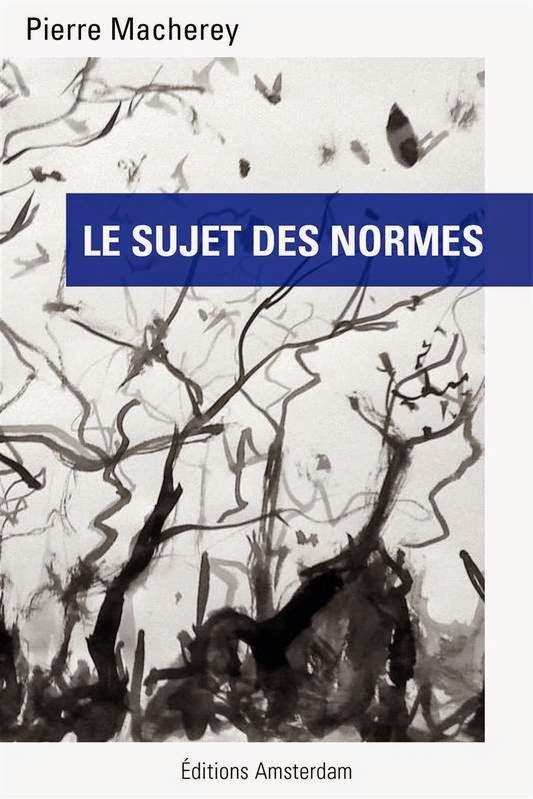 What does it mean to be subjected to norms, or, more to the point, to be a subject whose very existence is constituted in and through norms. This is the question of Macherey's Le Suject des Normes. While sections of this book have appeared in some form on his Philosophe au sens large website, this is a book very much unlike many of the past books on "everyday life," "the university," and "utopia." Those books were more like seminars--examinations of a central problem through a series of philosophical, literary, and sociological texts--this book is an intervention. It intervenes in a field of problems that is both old, returning Macherey to Althusser and to Marx, and contemporary, asking the fundamental question of contemporary society, of a society which has given up any grand narratives, or dominant ideology, but functions all the more efficiently through protocols and norms of action.

The very question of a subject of norms presupposes a certain fidelity to Foucault’s analysis of modern society. While Le Sujet des Normes does rely on Foucault’s theory of norms as a theory of society it does not do so unproblematically. Three chapters, the bulk of the book, are dedicated to the limits of Foucault’s analysis, limits that have to do with the intersection of Foucault and Marx. The first of these confronts Foucault’s analysis of subjectification with Althusser’s theory of interpellation. These two theories, often considered to be opposed, are examined in terms of their intersecting projects to posit a materialist constitution of the subject. Two aspects link Althusser's "Ideological State Apparatuses" and Foucault's dispositifs; first, they operate in and through a subject constituted as a free, ideology works in and through subjects and norms presuppose the very capacity to act, and second, they are not imposed on subjects, but constitutive of their subjectivity. There is no subject outside of norms or ideology, and the norms and ideology constitute their very capacity to act. The intersection of Althusser and Foucault is interesting, but in many ways it covers some of the same ground as Warren Montag's "The Soul is the Prison of the Body."

What is perhaps more interesting, and surprising, is Macherey's reading of Althusser's scene of interpellation, the famous "Hey you!" with and against Fanon's "Look, a Negro!"In many ways the later could be considered the negation of the former, putting into question the former's universality and centrality. The classical opposition would argue that some are interpellated as subjects, while others are pointed out as objects. However, for Macherey, the scene of interpellation, or designation, always already constitutes a kind of double consciousness--producing both a norm and its deviation. The ideal and deviant subject exist as effects of the norm, which defines less a practical action than a virtual sphere.

The third chapter examines another unexamined point of contact, this time between Marx and Foucault. It is part of what Stéphane Legrand refers to as “Foucault’s forgotten Marxism,” that discipline is defined as that which is necessary to "increase both the docility and utility of the elements of the system" a definition that would seem to imply if not necessarily presuppose labor power under capital. I have already commented on an earlier version of this chapter here, but in reading it, I decided to read some of Legrand's work, specifically the essay on Foucault's forgotten Marxism. It is worth noting that Legrand is much more critical of Foucault here, especially in terms of what Foucault loses when exploitation of labor drops out of his explanation. For Legrande, Marx's diagram of power, his assertion that "prisons resemble factories, schools, barracks, hospitals, which all resemble prisons," connects dots which only appear if the central point of connection, that of the exploitation of labor power disappears. For Legrand, the disappearance of exploitation leads to power, as an insoluble problem, producing such questions as can there ever be an outside of power? can one be opposed to power, etc. In some sense despite himself Foucault's analysis produces a metaphysics, or a series of metaphysical questions, in place of a concrete analysis. This is definitely true of the American reception of Foucault which has often taken the form of a series of abstract debates about agency, resistance, and determination, rather than investigations of concrete articulations of power.

Macherey takes this intersection of the socio-historical and the metaphysical in a different direction. Rather than criticize Foucault for transforming a series of political and economic transformations into a kind of metaphysics of power, Macherey reads both together to find the everyday metaphysics of capital. Given that capitalism is founded on the buying of labor power, of a capacity to work that. while sold as something that already exists, is only actualized in and through the norms of the productive process, the hidden abode of production has its own metaphysical subtleties. As Macherey writes,

"From this point of view, one could say that capital makes its own metaphysics, under a form that is practical rather than theoretical, when it transforms the labor power of its workers, which it acquires the right to utilize through an exchange for a salary, into a productive force which it envisions to increase the productivity, in surplus value or relative surplus value. This particular metaphysics is not made during leisure hours or through intellectual gymnastics, as one would make crosswords, but during the working day dedicated to production, by crossing the walls of the enterprise with such notions as “force,” “power,” and “cause,” which as a consequence crosses into reality, the concretization of fiction, these ideas of the spirit, the capitalist uses with formidable efficiency: better than would a philosopher with abstract demonstrations, demonstrating payroll and breaking down the tasks at hand; this metaphysics is materialist provided that we take it from the right angle, by entering into the factory, by making it serve economic development. We could, in passing, out of there a new and stripped definition of metaphysics in this somewhat unusual context, it is reduced to a mechanism that makes profit possible, in which nothing becomes something, becoming something that counts in cold hard cash. It is possible to conclude that capitalism, among other innovations that have changed the course of history, has found a way, the process, the "trick", which makes it possible to make practically actual abstract concepts, and that this is the mark of its proper genius."(my apologies for the translation).

The final chapter takes on the dominant of Foucault’s critique of Marxism, that is his critique of the concept of ideology. Foucault claimed that ideology was both too idealist, focusing on ideas rather than the more material bodies and forces, and what Althusser would call “theoretist,” replacing political distinctions with the distinction between true and false. Macherey addresses these critiques, but spends mush of the longest chapter developing not so much a "critique of Foucault's critique of ideology, but asking the question as to what ideology would look like in a society governed in and through norms. This is a very different question than the question asked by John Grant in his book Dialectics and Contemporary Politics.  Grant examines to what extent Foucault has an unthematized concept of ideology, the extent to which his argument that "in political thought and analysis, we still have not cut off the head of the king”(and similar statements) can be read to as Foucault positing a misrepresentation of power in contemporary society that can only be called ideological. Especially in that this misrepresentation of power is integral to its functioning, we do not see the norms because we are focused on the law. In contrast to this Macherey examines to what extent norms in their immanence, utility, and functionality can be considered to generate their own ideology.


The answer to this question passes through an examination of not only the history of ideology, and its intersection with such concepts as public opinion, but what could be called a Marxist theory of norms, specifically Lukács and Marcuse’s development of the “norms” of acting and thinking implicit in capitalist commodity exchange and technological development. Macherey’s book ultimately develops a theory of “infra-ideology.” Infra-ideology refers to the ideology that is related less to some overarching narrative or hegemonic belief system, but is immanent to the practices and norms of a society. Infra-ideology is the dominant form of ideology in a society that is simultaneously cynical and pragmatic. In this view, Productivity is not just an economic imperative of capitalist society, but is its ruling infra-ideology, an ideology that is all the more powerful, all the more encompassing in that it functions not at the level of overarching myth, but at everyday imperatives to function. On this view productivity is both capitalist metaphysics and capitalist ideology.

Le Sujet des normes is in some sense  Macherey's return to the series of problems and provocations that defined his entry in philosophy, the problems of theorizing the specific political and social problems of capitalism, a return after a long series of detours into Spinoza, Hegel, and the history of French philosophy, utopian thought, etc., and it bears the fruits of all of not only those detours (Spinoza and Hegel are used sparingly in this book, but at important junctures), but of an expansive sense of intellectual and political history that comes from years of teaching and research.  Years continued after some of the polemics and points of opposition have died down. Philosophers and theorists long considered opposed to the Althusserian camp, such as Lukács, Marcuse, Sartre, and Fanon, are productively drawn from. It is a much anticipated return, to which I say "Welcome Back."
Posted by unemployed negativity at 11:56 AM