The Kids are Alt-Right: On Green Room 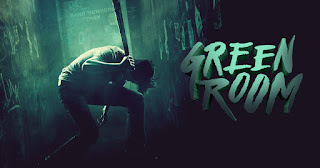 The problem with thinking in terms of best movies of the year is not only that it imposes an arbitrary dividing line, a line made more complicated by the uneven temporality of releases, but that it ties the calendar of films to other events on the calendar. Case in point Jeremy Saulnier's Green Room, last spring or summer its punks versus neo-nazis would have seemed like an entertaining and necessary point of conflict. Once you decide that your protagonists are a punk band nazi skinheads follow as the necessary antagonist. It is part of the natural order, like cats and dogs or aliens and predators. Who else would punks fight, hippies?

Now, a few months later, with terms like “alt-right” in the daily news, racist attacks becoming commonplace, its nightmare seems less like a diversion from the days’ events and more of a reflection of them. Of course that does not necessarily mean that the film has anything to say about the world around us. At first glance the punks versus skins, or Neo-Nazis, always seemed to be at a distance from any real racial conflict. Despite notable exceptions such as Bad Brains, Swiz, This Moment in Black History, and Downtown Boys to name a few, punk as a movement is notoriously white. The conflict between punks and skins always seemed like a safe suburban restaging of any racial conflict, the Screwdriver and Fuck Racism shirts were more cosplay than conflict. 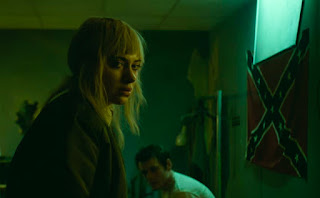 Green Room is a film that has been immediately celebrated for its verisimilitude. Its portrayal of punk is far from the usual stereotypes of big mohawks playing hard rock. It gets a lot right, the stickers on the van, crashing on floors, cancelled shows, and boring zine interviews. Its first act could easily pass for one of the best films about punk made in recent years, not like there is much competition.  Oddly, the least convincing aspect of the film's picture of punk life comes from the title. I have gone to hundreds of punk shows, even booked a few in my day, but they rarely entail "green rooms." The equipment is shuffled to the side, and the members of the opening band usually make up half the audience.

One superficial, but not untrue, reading of the film would make it a lesson on the limits of punk as a critical stance. It is the members of the Ain’t Rights who, after posturing with a rendition of the Dead Kennedy’s “Nazi Punks Fuck Off,” spend a good part of the movie asking for the police, even asking the skinheads when the police are coming. They start a fight that they have no interest in finishing. When push come to shove the punks reveal themselves to be the very suburban kids that they are rebelling against. Like the pit bull at the end of the film, they return to the very authority that they would seem to be free from. To quote Beckett, "Habit is the ballast that ties the dog to its vomit." This reading is underscored by the film's joke about "desert island bands,"when this is first asked by the punk kid interviewing them for his radio show, the band members try to out do each other in how punk their answers are, Misfits, Poison Idea, etc., but the return to the question later, when they think they are going to die, the answers are Simon and Garfunkel, Prince, etc. The posturing of punk authenticity gives way to a different authenticity before death. Beneath every punk breaking the rules there is a suburban kid looking to live by them, to quote Fugazi, "the runaway returns."

Such a reading of demystification is consistent with Jeremy Saulnier's labeling of this film as part of his "inept protagonist trilogy" along with Blue Ruin and Murder Party. Like Blue Ruin the film has all of the trappings of an action film, but there is a particular haplessness on the part of everyone involved, bullets miss and brilliant escapes get one hacked to pieces. The vulnerability of the body is underscored. It is almost as if he makes action films that are populated by the bodies of a horror film, vulnerability in the place of invincibility. The visceral nature of the body, its tendency to bleed and break, is the demystification of the tough guy heroics of the action genre. The mixed martial artist in the band, the tough one, is hacked to pieces quickly when he tries to escape. Every punk is just a suburban kid, and ever hero no matter how tough he claims to be, is just flesh and bone, waiting to be cut.

It is thus possible to view this film as a demystification of  the punk ideals of “D.I.Y” of the creation of new social norms and practices, practices and norms which, on this read, have all of the integrity and consistency of a faux-hawk, ready to be combed down when it is time to apply for a real job. However, it is necessary to follow this plot point to its end. The cops, eventually show up, and when they do they are immediately dispatched by Patrick Stewart’s menacing leader. He produces exactly what the cops are looking for, a stab victim and a suspect, two individuals motivated out of a combination of loyalty and money, to take the gut wound and the fall. Perhaps the allegory is to be found not on the side of the punks, but the skins.

The skins are able to work both sides of the law, manipulating cops while simultaneously planning murder. It is not so much a matter of the punk's hypocrisy, their failure to live outside of the law, but the skins ability to work both sides, to be the morally upstanding businessman when the situation demands it and the murderous thug when the situation demands it. This might be the film's allegorical lesson. The genius of Patrick Stewart's performance is that his menace is indistinguishable from his politeness, his insistence on rules and decorum. Before he even appears on screen he is introduced as a stickler for fire code violations. Beneath every appeal to law and order as a desire for the racial order.

The earlier focus on demystification is subject to its own particular dialectic, a punk/poseur dialectic of sorts. When the final two punks are cornered, and everything seems hopeless, they embrace the ridiculousness of their own position, painting their faces, donning the bomber jackets, and even exclaiming "Shazbut!" when cornered. Reckless self-destruction, posturing, and pop culture trivia turn out to have a few moves left.

The lead singer and lone survivor of the band, states at the end, battered and bloody but surrounded by dead nazi skins, that he has another answer to the desert island band question. The skinhead girl with him tells him that she doesn't care. Thus in its final reel, Green Room makes two contradictory statements about punk. First, it gestures towards a reckless posturing and self-destruction as an ethos, the only possible ethos when one is facing certain death and destruction. Second, in the final enunciation of the "desert island band," it offers a different dialectic. After the thesis of attitude and attempts to score "punk points" of obscurity and authenticity, and the antithesis of the guilty pleasures of pop, there is simply not caring, of recognizing that there is no cultural position that will save you. Punk might be slaughtered, but it still has some fight in it.

Posted by unemployed negativity at 2:00 PM