Reading the Menu Symptomatically: On Macherey, Marx, and Symptomatic Reading 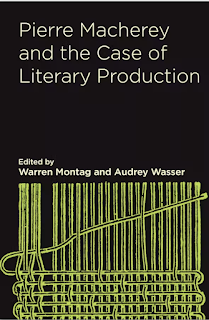 What follows is not a review of the entirety of Pierre Macherey and the Case of Literary Production, something that is hard to do with collections of essays in general, trying to find some common theme or thread, but would be easy to do in this case, because not only are the essays excellent on their own they also unify around an important thread of saving Macherey's work in general and his first book on literary production from obscurity. This has also been one of the projects of this blog, and one can follow the links to reviews (or at least posts) on his books on daily life, the university, utopia, norms, Spinoza, and literary production.
What I would like to do instead is pick up one of the central threads running through this collection. This thread has to do with the connection between symptomatic reading and capitalism. The term symptom carries with it a heavy Freudian influence, and with that there is the suggestion that the symptoms in question are some kind of slip reveal if not the unconscious then some other omni-historical reality, perhaps the limit of any ideology. In his essay, "Reading Althusser" Macherey makes the case that the symptom that Althusser read through Marx reading political economy had a particular structure and reality. As Macherey writes:
"Symptomatic reading seeks to show between the lines not the hidden presence of a content--the essence hidden beneath appearance, which requires only that it be brought into the open and placed before our eyes--but a lack waiting for the means that would permit it to be filled, means which materially are lacking."
And more specifically in the next paragraph.
"Marx's discovery is that capitalism exploits an ambiguity related to that on which the notion of "power" is based; it is made possible by the ambiguity proper to a reality that may exist both potentially and actuality at the same time, and from which it has found the means to draw the maximum profit, in the two forms of extraction of absolute surplus value (an extension of the working day) and of relative surplus value (an increase in the productivity of labor power). When Marx speaks of the relation between essence and appearance, he speaks without knowing it, because, in fact he does not speak of it, all the while speaking without speaking of the relation between the potentiality and actuality, which is the secret of the function of labor power and of its exploitation by the capitalist who pretends to buy labor, and to pay what it is worth, as Ricardo insisted, while in fact he has rented the right to make use of it a certain place and time, transforming it from the potentiality to the actuality of labor power."
Symptomatic reading concerns the fundamental orientation of Marx's project. It is the lynchpin around which the whole critique of political economy rests. The difference between labor, as that which is sold and bought, and labor power, gets at the fundamental relation between potential and actuality in capitalism. Labor is treated as any other commodity, it exists on a market that fluctuates with rises and fall of supply and demand, but unlike any other commodity it is not a thing, but a potential, a capacity. How much it produces, how much work it does (or really he, she, or they do) is not set, not determined by its price on the market, but is determined by how much work the capitalist can get from it by extending the time worked (absolute surplus value) or the intensity (relative surplus value). This is why, in the one section of Les Sujet des Normes that has been translated Macherey argues that capitalism should be understood as a kind of materialist metaphysics because it puts to work, in a practical way, the distinction between potentiality and actuality. This metaphysical division is also a quotidian division between the worker as an owner of labor power, as a wage earner, interpellated as such, and worker as part of the valorization process, as part of productive process and subordinated to it. 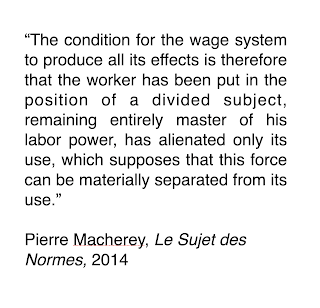 In some striking passages from the essay on Reading Althusser Macherey, in a passage that to some extent annuls the gap that would separate "Althusserian" Marxism from "Autonomist Marxism" (quotes are necessary for both of those terms), Macherey argues that this division masks a fundamental relation of domination (my apologies for the picture of the text). 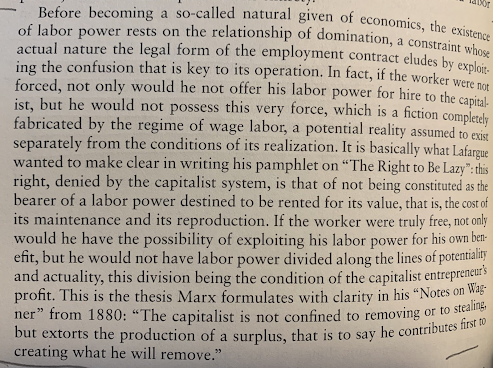 The symptom of capital is thus wage labor, or the difference between wage labor as potential, as labor power and actuality, a difference which is also the difference between the labor market and the "other scene of production. "As much as it is possible to read other "sciences," other discourses, symptomatically it would have to do other fundamental points of schism or division, political economy can be read symptomatically to the extent that it treats labor power as a labor, treating a potential as actuality, and a relation as a given. Philosophy can read symptomatically to the extent that it, in its bourgeois variation, effaces this as well, treating the market as the paradigm of equality rather than the basis for a new form of domination. Macherey offers a striking, and a strikingly political reading of the concept of symptomatic reading.
Capitalism as a mode of production rests on the paradoxical status of labor power as a commodity, and political economy, or economics, as a discipline is constituted in effacing this fact, as are other disciplines to the extent that they are under the sway of that new queen of the disciplines.
What does it mean, however, to think of this as a symptom? Or, put differently where else might these symptoms manifest themselves? If capital is founded on the unique status of labor as a commodity where might we find symptoms of the repression of this fact? I would say that the capitalist class, at least the small business owner, seems to also maintain that wages have a unique status. Whenever wages go up, or there is at least a possibility of a wage increase, restaurants and other businesses will claim that this threatens their very existence. The same business owners are generally silent about other increases of the cost of doing business such as rent or utilities. (Although the current inflation has changed this a bit.) These costs are absorbed or are silently translated into increased prices. An increase of wages is treated less as just a new cost and more of a threat to the very idea of a profitable business. To give an example, during the time when the pandemic was still acknowledged the city of Portland, ME, where I live, the city imposed a hazard pay increase that raised the minimum wage for workers to $19.50.  Several restaurants increased their prices accordingly and even stated on their website menus that the price increase was a direct increase of the increase cost of wages. One could contest the necessity of this, after all it is possible to bear these increases by just taking in less money for the owners. However, I am less interested in the economics of this than the status of wages as a symptom. Higher wages are often talked about as a make or break cost, as not just another cost but almost as an existential threat to capital as such.
In his contribution to the same volume Nick Nesbitt writes, "Marx seems to be telling his reader that the abstraction that is value must be thought not only as a concept but also vividly imagined, in the form of a animated manifestation in the concrete materiality that is the human symbolic order." This seems to be another way of thinking of a symptom, as much as the actual exploitation of labor must be effaced and concealed behind the image of the labor market, as a market of "Freedom, equality, and Bentham," this exploitation still appears, albeit in an inverted form, every time wages increase, or more to the point, workers seem to resist the discipline and subordination that is required of them. That every increase of wages, or every attempt to address and acknowledge the working conditions appears as a a threat to the economic and symbolic structure of capital is itself a symptom of the exploitation that the system depends upon.
Posted by unemployed negativity at 7:37 PM