Our Thoughts Are With Capital: Strategy as Subjection 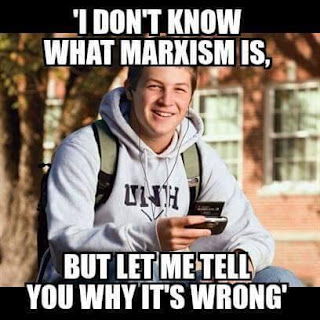 Eduardo Viveiros de Castro's Cannibal Metaphysics has, as one of its many charms, one of the best polemical lines of recent memory. I am referring to the following:"Even if capital does not always act with reason, one nonetheless gets the impression that reason always delights in letting itself be roughly be taken by capital.”

Moving beyond the specific polemic, and beyond the text of Viveiros de Castro's book I am interested, in asking the question as to how or why reason delights in being taken by capital so much so that a working definition of what is considered "reasonable" is synonymous with "what works for the existing interests of capital." Of course there is no mystery to some of this, when it comes to explaining the pundits or professional opinion makers Upton Sinclair's response, "It is difficult to get a man to understand something, when his salary depends upon his not understanding it," is more than sufficient. I am not interested in explaining the thought processes of those whose material conditions depend on thinking along with capital, the ruling ideas of the ruling class, but on those who think against their material conditions. Who is included in this last list is completely unclear as it includes not only those whose labor is exploited, but those that depend on the current environmental conditions for their survival. That is my convoluted way of saying that what is "rational" at the current conjuncture is doing everything necessary to ameliorate the destructive effects of capital on the planet, that such solutions are considered extreme and irrational is perhaps final proof that reason equals capital.

It is perhaps not surprising that I find the answer to this question in Spinoza. In turning to Spinoza, however, it is not (simply) my intent to make Spinoza the man with all of the answers yet again, but, perhaps more importantly, expand beyond the recent articulation of Marx and Spinoza offered by Frédéric Lordon. Lordon's synthesis of Marx and Spinoza is primarily articulated along the lines of conatus, desire and striving. Capitalism is a massive reorganization of desire in that it makes our very survival, our very striving, into a desire for work and money. Lordon's reading, while suggestive is also selective. Affects are not the entirety of Spinoza's "philosophical anthropology" (if it can be called that), nor are they the entirety of our subjection to capital. If, to follow Lordon, we live in a capitalist society and not just a capitalist economy then such a society is also a restructuring of imagination and thoughts as well as affects, an episteme and an an epithume. I have been thinking about the former with the pithy formulation The order and connection of ideology is the same as the order and connection of exploitation, a formulation which plays off of EIIP7.

However, I now think that the proper starting point for thinking about the intersection of ideology and exploitation, of thoughts taken by capital might be found in P9 and P12 of Part Three. They are as follows:

P9: Both insofar as the mind has clear and distinct ideas and insofar as it has confused ideas, it strives for an indefinite duration, to persevere in its being and its conscious of this striving it has.

P12: The mind as far as it can, strives to imagine those things that increase or aid the body's power of acting.

Proposition Nine makes it clear that what we strive for is often an inadequate idea of what causes our happiness or desire. Its scholium states the famous reversal of values "...it is clear that we neither strive for, nor will, neither want, nor desire anything because we judge it to be good; on the contrary, we judge something to be good because we strive for it, will it, want it, and desire it." The appetites and with them the entire history of existence determine our desires. These appetites have been determined by our history, we are determined in our striving by our history. Proposition Twelve however suggest that the mind in its striving affirms those thing that actually aid the body's power of acting, that they are in some sense adequate. It suggests we can orient as much as be oriented in our desires, thoughts, and actions.

Between the two Propositions is not only the difference and identity between inadequate and adequate ideas, imagination and reason, but the entire variation of striving. As Laurent Bove argues all thought, just like all striving, is strategic, interested and oriented. The only thing that differs is what one is oriented towards, or away from, what is strived for or avoided. As Spinoza argues at the end of Part II there is no separate faculty of thinking and judging, and thus there is no indifferent thought, reason, separate from striving. This striving is always already determined by its conditions, which include social conditions. As Bove writes, "“Le conatus individuel est ainsi determine par la conatus global du corps social qu’il contribue, par imitation, à construire.” (See also Hasana Sharp, The Force of Ideas in Spinoza. )

The question then is what orients thought in capitalism, or, more to the point, what orients thought in capital towards capital. As I suggested above, I do not think that the answer is to be found in the pundits and official ideologists, but in the quotidian experiences of day to day life. To give a snapshot of this there is the following passage from Jennifer Silva's Coming Up Short, which does an excellent job of documenting a kind of quotidian neoliberalism. Silva's strength is to see the reproduction of a kind of isolated individualism not as a product of ideology, but of social life, specifically the way that the failures of education and other institutions produce and reinforce ideas of individual responsibility. Austerity generates neoliberalism from bellow. As Silva writes:


"At first glance, it seems counterintuitive that the young people who would benefit most from social safety nets and solidarity with similarly disadvantaged others cling so fiercely to ideals and practices of untrammeled individualism and self-reliance, not only as the way things are but the way they should be. I argue that their deeply held convictions not simply opposed from above but that they are grounded in their everyday experiences of humiliation and betrayal, their recognition that the social contract they depend on has been severed--or simply never existed in the first place. Over and over again, working-class youth learn that they can depend on others only at great cost. In turn, they numb the ache of betrayal and hunger for connection by seizing upon cultural scripts of self-reliance, individualism, and personal responsibility. The more "flexible" they must become in their interactions with institutions--that is, the more they learn to manage short-term commitment and disillusionment--the more hardened they become to the world around them."


Negative solidarity is the environment in which we strive, and it shapes the very nature of our strivings. To strive for something else, to escape the "cruel optimism" of believing in our work ethic, our flexibility, our innovation, or entrepreneurship, as that which will save us, it is necessary, not just to declare alternatives, such is the folly of every radical teacher, but to enact them, to make them desirable and livable. Without this every radical critique comes up against the weight of not only the world, but the ingrain tendency to align ourselves with the way of the world, to remake our striving and thinking in its image. As Jonathan Crary writes,


"Now there are numerous pressures for individuals to reimagine and refigure themselves as being of the same consistency and values as the dematerialized commodities and social connections in which they are immersed so extensively. Reification has proceeded to the point where the individual has to invent a self-understanding that optimizes or facilitates their participation in digital milieus and speeds."

Posted by unemployed negativity at 10:57 AM

Why do our thoughts reside with capital? Heidegger's concepts of "Enframing" and "Standing Reserve" from his essay "The Question Concerning Technology" seem to apply here. In Heidegger's view, Technology is essentially a way of revealing, ie a way of showing real things in the world. The way of revealing by Technology is called "Enframing" - a demanding for an ordering - namely of all things into their capacity to support the very ordering itself, the "Standing Reserve". (surely a poor translation and arguably a bad neologism, "Standing Reserve" means roughly an un-nameable source of an ordering, akin to the source of the uprising of a mountain range). We can think of the internet, or capital markets, or virtually any product of modern technology in these terms, as all relating back to this abstract ordering for the ready retrieval of stored energy, and by this seeming ubiquity of ordering can lose sight of other ways of revealing truth, namely, "Poïesis". The parallel with capital can be easily seen as an ordering-for-retrieval, which blocks access to other ways of revealing. Heidegger attributes the basic 'danger' inherent in Technology as something potentially revealed (as dangerous) and thus something destined towards. This danger has a two-way character, for in its proximity, revealing and ordering themselves are brought into an essential light. The approach to danger demands more questioning, and brings to light above Enframing, of capital or any product of modern technology, Man's foremost essential presence in revealing and Truth.
Suggested study: "The Question Concerning Technology" pdf and perhaps Dr Gregory Sadler's Youtube lecture on the same topic.

Thanks for the comment. Two quick response. I am not sure if Heidegger is talking about capital, yes there are points of resonance, with the ideas of standing reserve and resource, but that has more to do with how nature or the world is perceived, than the way people orient their own subjectivity. I do not think that Heidegger has a concept of capital. Second, I am not even sure how much that way of thinking about technology holds today, it seems very much oriented towards the factory. Bernard Stiegler has argued that what Heidegger did not get about technology is how it reconfigured memory and attention.