We Get Vacations? On The Americans 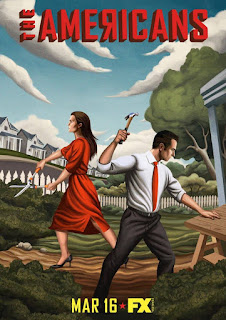 When I first wrote about The Americans I saw its premise as yet another variant on the sociopathic anti-hero that has become the mainstay of popular culture. The lies and deception seemed no different than the double lives of drug dealers, serial killers, or adulterous ad men. However, I now think that I was wrong about this, or at least the show had moved in that direction. It has the same deceptions, murders, and betrayals that make up the rogues gallery of prestige television, but unlike many of the shows that it is compared to, Elizabeth and Philip feel the effects of what they have done. The do not, like Walter White, Don Draper, and others, float above it all. They feel and struggle with every loss, with every life destroyed.


The Jennings are in some sense the hardest working family on television. This is the point that was driven home in Season Four. This is the season in which their spy operation became a family affair, bringing Paige into the business. It is also the season in which both characters dealt with some serious losses,  Phillip lost Martha who was sent to Russia and Elizabeth lost her friend Young Hee Seong in order to blackmail her husband. Well, she did not lose her, she had to pretend to be dead. There are, of course, multiple ways to interpret the show's title, The Americans, as irony, as some kind of statement about what the Jennings become, but it might also be a reflection on us, on the show's audience. The Jennings are people for whom there is no distinction between work life and home life, between friends and contacts, they are thoroughly networked. There is the suggestion of actual social relations, connections in the various "workings," but they remain hard to see and discern. Does Philip enjoy playing racquetball with Stan? Does Elizabeth like learning about Korean cuisine from Young Hee? It is unclear or unreadable, or readable only in the loss and pain that comes after, with the loss. As much as the show is about spies and fabricated identities, it is difficult to say who Philip and Elizabeth are when they are not wearing disguises, even their most intimate moments are perhaps part of the act of the marriage. The only character who clearly feels the divide between friendship and its semblance, between hanging out and keeping tabs, is Paige, who is more or less sentenced to keep tabs on Pastor Tim long after her enthusiasm for Christian activism has waned.

It is not just that the Jennings are thoroughly caught up in a life where work and life are indistinguishable. Their particular work demands a singular and particular response in terms of both means and ends. Sometimes it is difficult to understand exactly why they spending time with particular individuals, it was several episodes before Young Hee's connection to the bioweapons lab was revealed explaining Elizabeth's sudden interest in Mary Kay, or it is unclear how the Jennings were going to deal with Pastor Tim. Means and ends are singular and specific: the Jennings can use anything from seduction to blackmail and murder to get what they need or want,  and the ends can include everything from gaining the trust of a high school girl (whose father works for the CIA) and making a weapons lab scientist feel so guilty that he is willing to temporarily overlook security protocol. The entire range of human emotions from lust to loneliness, greed to guilt, exist to be exploited. Perhaps the Jennings have read Marx's 1844 Manuscripts

"General exploitation of communal human nature, just as every imperfection in man, is a bond with heaven – an avenue giving the priest access to his heart; every need is an opportunity to approach one’s neighbour under the guise of the utmost amiability and to say to him: Dear friend, I give you what you need, but you know the conditio sine qua non; you know the ink in which you have to sign yourself over to me; in providing for your pleasure, I fleece you."

This perhaps explains their hostility and proximity to Pastor Tim; they are, after all, working the same angles. Or, more to the point, in The Americans we see all the characteristics that Paolo Virno associated with post-Fordist labor, contingency, plurality, improvisation, and communication portrayed not as the conditions for a new liberation but an old exploitation, that of service to the state. They have given rise to what Virno called personal dominations.

When the Jennings went on a vacation, were given no new assignments, the show immediately skipped over six months time. As Hegel wrote on history, but it could also be applied to binge worthy television, "Periods of happiness are blank pages in it, for they are periods of harmony." Other shows would perhaps fill in the blank with a brief montage covering daily life of the Jennings, but in this case there was no montage set to Rockwell or The Romantics. This is because work for the Jennings is not the quantitative accumulation of days, but singular encounters and improvised situations.

So, to put my cards on the table, or, in a metaphor fitting the show, to take my wig off, I will suggest that perhaps the "Americans" of The Americans are us, caught in the contemporary uncertainty and precarity of the "gig economy," forced to exploit every aspect of themselves, to be entrepreneurs of themselves, and to take advantage of every weakness in others, see it as a niche.
Posted by unemployed negativity at 4:11 PM