Sidekick No More: Horkheimer on Work 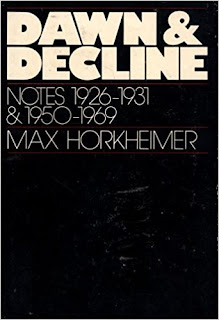 In Max Horkheimer's critically underrated (and out of print) Dawn and Decline we find the following aphorism:


Whoever Doesn't Want to Work Shouldn't Eat: This biblical pronouncement is a popular maxim. It should say: Everyone should eat, and work as little as possible. but even that is much too general. To make work the most important human activity is an ascetic ideology. How harmonious society looks when everyone "works," irrespective of difference in rank and wealth. Because the socialists retain this general concept, they become the instrument of capitalist propaganda. Actually, the "work" of a cartel director, the small entrepreneur and the unskilled worker are just as different from each other as power differs from worry and hunger.

The proletarians demand that work be reduced. This does not mean that in a future, better society, a person should be prevented from being as active as he pleases. Instead, the goal is to rationalize the activities life in society requires, and to distribute them evenly. Compulsion, not freedom, suffering, not pleasure, are to be curbed. In a rational society, the concept of work changes.

But today, "those that don't want to work shouldn't eat" is secretly no longer meant to define the future but the present. The sentence transfigures the existing order: it justifies the capitalist. He works. But it damns the poorest, for they don't. Everywhere, the bourgeois manages to reconcile an originally revolutionary thought of his own making, and which the socialists retain as a general maxim, with reactionary morality of the ruling class. But the phrase envisages a future society, and what should be inferred from it now is not the sanctification of work but the struggle against its present form.


Horkheimer's aphorism is striking  in the way it anticipates, and even prefigures, much of the current anti-work writing, Graeber, Fleming, Weeks, etc., but this is true of the Frankfurt School in general, from Benjamin's Theses on History to Adorno and Horkheimer's Towards a New Manifesto. The anti-work Frankfurt School book has yet to be written. More to the point, Horkheimer's passage pinpoints a particular reversal in the morality of work. It recognizes that we are in the grips of a capitalist workerism, in which work is no longer the claim of the proletariat but of the hardworking "job creator." Or, as Balibar writes, in a passage I cite all too often, “The capitalist is defined as worker, as an ‘entrepreneur’; the worker, as the bearer of a capacity, of a human capital.”

Balibar's passage orients this transformation towards the current conjuncture, not just in terms of the change of names "entrepreneur" and "human capital," but beneath these names we can glimpse the shadow of deindustrialization of a worker with capacity but not employment. That the capitalists want to claim work for themselves, present themselves as the hardest workers, logging the most hours etc., is no doubt predicated on a kind of homonym as Horkheimer suggests, work in office towers in posh coffee shops is just not the same as cleaning floors, doing laundry, or assembling cars, but is is a homonym that makes it possible for bosses to interpellate much of the working class. Much of the global turn to the right is predicated, at least in part, on seeing more of a commonality between white collars and blue collars than those working and those without work, a commonality underwritten in large part by racism. There is an upside to this, a reversal of Twain's remark "If work were so pleasant, the rich would keep it for themselves": if the ruling class want the symbolism of work, its moralism, and discipline, then they can have it. To be optimistic we could argue that the current conjuncture is one in which anti-work is no longer at the fringes of anti-capitalist politics, associated with its left or anarchist currents, but comes to the very center.

Mostly, however, I just wanted to post this to argue that Dawn and Decline is unfortunately overlooked.
Posted by unemployed negativity at 7:20 AM