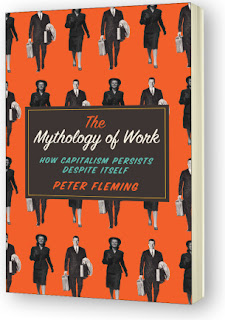 Whilst in ordinary life every shopkeeper is very well able to distinguish between what somebody professes to be and what he really is, our historians have not yet won even this trivial insight. They take every epoch at its word and believe that everything it says imagines about itself is true.
--Marx and Engels, The German Ideology


One of the persistent themes in Peter Fleming's The Mythology of Work: How Capitalism Persists Despite Itself is a critique of Lordon's Willing Slaves of Capital. What is criticized is not the particular synthesis of Marx and Spinoza, but how Lordon reads management literature. Fleming criticizes Lordon for taking management discourse at its word, for seeing motivation and the various demands to "love one's job" as something other than smokescreens for a strategy of fear and anxiety.


As Fleming writes, taking on Lordon's glib summation of the world of contemporary capitalism as the world of "the girlfriend experience," in one must love what one does (or at least appear to):

If the contemporary capitalist enterprise is anything remotely like a love affair (a particularly dreadful metaphor no doubt) then it would be one with a partner that gains pleasure from persistently announcing that he or she plans to leave you, and sooner rather than later. Neoliberal capitalism is not the 'world of the girlfriend experience' but of the deranged girlfriend experience.

There are at least two issues to address here (beyond the more obvious and unsettling fact that these two male theorists of work are working out their differences through fantasies and resentments about women) in a short response that is neither a defense of Lordon nor a review of Fleming's book. First, it raises the question of how "we," critics, philosophers, revolutionaries, read "them," management gurus, economists, etc. Fleming's major response to Lordon is that he takes management texts at the word, assuming that the talk of love, motivation, and desire corresponds to actual practice. Lordon is not the first to be criticized for reading capitalism superficially, for taking its ideology as its reality. A similar criticism was made about post-autonomist readings of cognitive capitalism and immaterial labor, and could also be made of the contemporary theorizations of neoliberalism--all of which work on the premise that the neoliberalism is synonymous with actually existing capitalism. There is of course much to be said for attempts to read capital beyond Capital, to grasp the current conjuncture through texts that are contemporary with it, but there is also something to be said for Reading Capital, for the idea of a symptomatic reading. (Yeah, that sentence). It is necessary to sort out symptoms from logics, to read the contradictions, justifications, the answers without questions and questions without answers in contemporary discussions of management. Doing so requires less a simple examination into corporate lies and ideology, many so transparent as to barely merit refutation, but an understanding of the gap that separates daily experience in capitalism from its representation.

What Fleming argues is taking place is less colinearization, the modeling of the striving of the individual on that of the corporation so that everyone becomes a "motivated self-starter," than a strategy of destabilization, demobilization, and divestment. One is made an entrepreneur of oneself not by a reorganization of one's desires but of one's fears. Resources are mobilized, individuals work harder, when they fear that there is no one else to rely on, and they can count on no one but themselves. For Fleming management functions by not functioning. Its distance and detachment from the task at hand, the fact that managers (or CEO's) pride themselves on utter indifference from the enterprise they are managing, shifting from banks, to power companies, to universities, is a part of its production of a constant low level frustration. "It intentionally creates a gulf or division between managers and the managed, which is an increasingly visible power dynamic in many neoliberal institutions."The same could be said for its constant production of metrics and standards. Management functions by producing a constant set of frustrations and fears. The frustrations function as a constant alibi for layoffs, which in turn fuel the fears. It is better to be feared than loved.

This brings us to the second difference between Lordon and Fleming, one concerned less with how to read contemporary capitalism than how it feels. Fleming primarily considers contemporary capitalism to be governed by sad affects, by fear and anger,  rather than the joyful passive affects that Lordon argues defines contemporary capitalism. Their opposition at the level of affects can simplified, or simplistically stated as subjection through joy or sadness, through alienation or the constitution of desire. One could raise philosophical questions about these dominant affects, but it seems to me that the really question is complicating and expanding the "affective composition of capital." It is not a matter of deciding if people are happy or sad, but in understanding how the joys and sadness of contemporary capitalism work to reproduce it, and can become the site of its unravelling.


Posted by unemployed negativity at 10:41 AM

"One is made an entrepreneur of oneself not by a reorganization of one's desires but of one's fears. Resources are mobilized, individuals work harder, when they fear that there is no one else to rely on, and they can count on no one but themselves."

I'm coming at these things from more of a 19th century perspective, but: doesn't this circle back to the Darwinian model that was at the time thought to fit quite nicely with Marx's account of capitalism? Firms either produce a better return, or capital destroys them and goes elsewhere? it is perhaps not fear, but a realistic awareness of your disposability that drives the actual practice of capitalism?