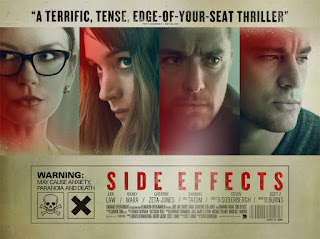 
Despite this mercurial tendency, Soberbergh has shown an increasing ability in recent years to map some of the changes of the production of subjectivity in post-crisis neoliberalism. I am thinking specifically of The Girlfriend Experience and Magic Mike, two films that, despite their sensationalized subject matters--call girls! male strippers!--can be better described as films about contemporary work and subjectivity. Or, more to the point, they are films about how contemporary labor is the putting to work of subjectivity. The scandalous content of these films, not just the subject matter of escorts and strippers but the casting of Sasha Grey, an adult film star, and Channing Tatum, a former stripper, serves to underscore this central theme. These are films about people who have to exploit every aspect of themselves, body, mind, and desires, have become entrepreneurs of themselves. The central characters in these films are constantly maneuvering from encounter to encounter, seeing every relation as a possible opportunity. (This is why Frédéric Lordon calls contemporary capitalism the world of the "girlfriend experience") The characters in these films are trying to convert their human capital, looks, bodies, and sexuality, into something that can transport them from the illicit (or at disparaged) activities of sex work and exotic dancing to a socially sanctioned dream job. They are about a kind of primitive accumulation of subjectivity, a violence done to the self to make it legit.


Side Effects does not directly engage with this transformation of subjectivity. At first glance it seems to be what could be called an "issue movie," doing for psychopharmacology what Contagion did for viruses, illustrating our greatest fears. Upon deeper inspection, however, it becomes a thriller that has been described as "Hitchcockian." (I am not entirely sure what is meant by this other than the general characteristics of obsession, desire, and double crosses that define a thriller. If one wanted to be a little more rigorous about similarities to Hitchcock, however, one could say that it frames these plot point through what Deleuze called the "mental image," a particular way of shooting actions and reactions that attempt to visualize thought.)  The emphasis shifts from the machinations of the drug industry to the obsessions of a psychiatrist, whose interest in a female patient crosses from the professional to the pathological. Given Soderbergh's tendency to vary genres and approaches, to shift from personal "indie" projects to films that are competent approaches of genres, it is worth asking, what kind of movie are we watching? It is my impression that Side Effects addresses the transformation of subjectivity through the displacements that separate exploitative genre films from pseudo-serious Hollywood issue films.

This can be seen in the way in which the two issues, pharmacology and finance capital, warp and bend the particular genre constraints of the thriller. If one dimension of a post-Hitchcock thriller is certain opacity of intentions, both on the side of the protagonist, whose pursuit of the truth might be an obsession (Vertigo, Rear Window), and the woman, who might be a victim or co-conspirator in a plot (Vertigo again), then pharmacology shifts this opacity to a different level. At the center of the film is Emily, a young woman whose husband has recently returned from prison, she suffers from depression, which manifests itself in a few bouts of self-destruction. She is eventually prescribed a series of anti-depressants, including a new (fictional) one called Ablixa. It is under the influence of this medication that she kills her husband. This raises the question of her culpability and deception, but not in terms of concealed motives (at least initially) or unconscious desires. There is a particular flattening of subjective depth, the depth of motives and intentions is reduced to chemical equations. The question is no longer "what does a woman want?" but "is she taking her meds?"

The question of intention, of whether or not an action was willed or the accidental effect of chemicals,   relates to the question of motive and gain. Why would a woman kill her husband, what would she gain? Or, who would gain from destroying the reputation of a psychiatrist? One could perhaps model the different types of murder mystery to the history of different forms of financial accumulation, from the classic murder to gain an inheritance to insurance policies. As the financial models become more and more complex so does the corresponding level of intrigue. The murder for inheritance plot corresponds to the style of drawing room mysteries in which all of the suspects are gathered in the same room (light refreshments are served), but the plots and structures necessarily become more baroque with the transformation of financial structures. The wealthy patriarch at least knew that he could be murdered for his wealth, and could always rewrite the will. With the insurance policy the victim may not even know how much he is worth, introducing noir themes of alienations, isolation, and distrust.. Side Effects introduces financial speculation and the world of derivatives as a possible motive. Derivates, and specifically, the practice of financially gaining from a stock losing value, complicates the motives to the point that it becoming increasingly difficult to eliminate suspects.  Anyone could take out options, and the failure of a company, or drug, is as lucrative as its success. The question of "who would benefit," to cite The Dude citing Lenin, becomes increasingly difficult to follow in the face of such financial instruments. The beneficiaries can no longer fit in the same room or even be mapped onto a bulletin board. As Jameson argued, the paranoid dimension of the thriller becomes the only way to map the structures of contemporary capitalism.

The overlap of psychopharmacology and finance might make the film sound like a cinematic version of Bifo, but that would be too generous to it. As I mentioned it is in many ways a typical thriller. After the murder the plot focuses on the psychiatrist who prescribed the drug (played by Jude Law) whose career has been ruined by the murder and by implications of sexual harassment. Much of the last act descends into typical thriller fare, complete with lesbian affair subtext worthy of Cinemax.  The shift to thriller material drops many of the questions about pharmacology, it serves as something of a MacGuffin.

While the end of the film drops the thread of psychopharmacology, leaving the companies off of the hook, and financial capital, turning to insider trading, it does raise the issue of vision. Once Jude Law's psychiatrist is suspected of impropriety, every action only reinforces his guilt. The hermeneutics of suspicion become guilt by suspicion. His only way to clear his name is to frame this gaze, to employ his power as a psychiatrist to cast doubt on the sanity of those who have conspired against him. In the end the film takes a page from a much older critique of psychiatry, not the one that questions the way in which drugs keep us functioning in a world that makes us sick, but the one that questions the authority of the psychiatrist. Once one is diagnosed as unstable and unhealthy, once one is placed in a hospital, it is very difficult to appear sane.

There is something chilling about the film's final scenes. The psychiatrist has cleared his name. One of the conspirators is in jail, the other is wrongly held in a mental hospital, so doped on thorazine that she is a shuffling zombie. The abuse of psychiatric power darkens what would otherwise be scenes of a happy ending. Perhaps this is the film's final point, a point that connects it to the earlier films which dealt with losers in the crisis of neoliberalism, people who tried to sell everything of themselves and lost. In contrast to this, Side Effects  shows the cost of wining.
Posted by unemployed negativity at 11:48 PM

"One could perhaps model the different types of murder mystery to the history of different forms of financial accumulation, from the classic murder to gain an inheritance to insurance policies." I think you just did. Briefly, but very suggestively.

Now I'd love to read your thoughts on "Cloud Atlas"!

Great review!
As you point out, one of Soderbergh's great strengths, especially in the last few years, is his casting. (Among genre directors, I think he shares this talent with Paul Verhoeven.) The interplay between the actor on screen and the 'extra-textual' image of the actor--as in Jameson's great essay on Dog Day Afternoon--renders the boundaries of these films permeable, creating folds in the spectacle that echo the feedback loops generated in the conflation of production and reproduction. In the context of your review, Jude Law not only embodies a traditional critique of psychiatry, he is also something of a biopolitical entrepreneur. His scheme too plays on speculation: speculation on the affective ties of the patient and her former therapist, which he manipulates through control of physical presence (restricting his patient's visits and phone calls), and, as you imply, the image--the scene where he orchestrates the meeting with the former therapist, which his patient watches through the window, attempting to read their gestures from a distance, and without the revealing valences of the human voice. This labor, it seems, maps onto the financial schmoozing that takes place on the party boat, revealing its monstrous underside like the aquarium scene Welles' The Lady from Shanghai (which, happily, was playing at my local rep theatre in parallel with Side Effects).
Here's hoping you'll also review Soderbergh's upcoming HBO biopic on Liberace, starring Michael Douglas...Gordon Gekko as virtuoso.

Yes, Matt, I think that it would be interesting to read the combination of speculation and appearances that runs through Jude Law's strategy at the end. His strategy hinges on the fact that the appearance of a conspiracy is just as effective as a conspiracy and the appearance of insanity is just as damning as insanity. It would be interesting to relate this to the theme of speculation. However, it would be important to avoid the idea of the performative dimension of financial capital embraced by Marazzi and others. It seems the key to doing so is to try to map labor back onto the plot. Emily is the laborer, she does all the work, affective labor primarily, and the entire speculation hinges first on her performance and then on her reading of Jude Law's performance.

Unknown said...
This comment has been removed by a blog administrator.
2:47 PM

As with Iron Man 3 above, I really like this analysis. Watching the film, it felt like two different movies sewn together in a cumbersome package. The first half did feel like Bifo; the second half felt like a confused and reactionary mess. I say reactionary because of the Emily character. For me, working in mental health, the twist in her character's development meant a shift in political registers. Not only do we get all the Jude Law stuff you talk about, but we are also treated to a treatment of the psychiatric patient as faker wrapped up with woman as liar. 'Look', the film seems to demand, 'the "mad" are only trying to con you'.