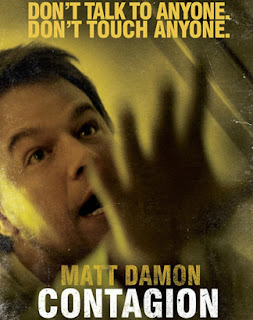 Let us begin with a few often repeated arguments about horror films. These are not so much theories, but things that "everyone says," statements that appear occasionally in film reviews without justification or citation. First, horror films are the way in which a society or culture confronts its fears. Although confront is not quite the right word, since the whole point is that these fears appear only in a mediated form, masked by monsters and aliens. Godzilla is a stand in for atomic war, body snatchers for communism or McCarthy conformism, vampires for sexuality, zombies for consumption etc. Second, horror movies, as well as disaster films, allow the audience to play God, to view some people as fit to die and others to live. This dimension of films is highly moralistic and often racist (the black guy dying first is almost a meta-cliche), as the final credits close on the surviving virgin or restored family. We might call these two things the "spontaneous philosophy of the horror film."

Contagion breaks with this first point. The film presents the scenes of horror that we have seen countless times, military lockdown of city streets, empty urban spaces strewn with garbage, people raiding grocery stores and their neighbor's home for food and weapons, but they are not responding to a zombie invasion or alien attack. They are responding to a contagious virus, the very thing that all these other monsters were allegories for in the first place. Thus, one could argue that Contagion is the "return of the repressed," the very thing that we are afraid of made manifest. It is horror unmasked.

Things change a bit, however, if we remember our second bit of spontaneous philosophy.The film's patient zero is Beth Emhoff, an international executive played by Gwyneth Paltrow. One of the film's many plot threads deals with the World Health Organization and Center for Disease Control's attempt to trace the emergence and spread of the disease. In the context of this we learn that she was in China to see the groundbreaking of a new factory and that she had an affair while on a layover in Chicago on her return. These two things set her apart from her husband, played by Matt Damon, who is shown as the dedicated husband, staying at home with the kids. Moreover, there is the suggestion that doing business in China and cheating on her husband are almost the same thing, a betrayal of nation and family. She spends part of her trip at a casino in Hong Kong, and her every action at the casino has been recorded. The footage of  the surveillance camera provides us with a visual record of contact and contagion.The film pauses, freezes, and focuses on every touched hand, ever infected cocktail glass, and casino chip. Benjamin's argument about film opening up new worlds is realized in a kind of cinema of contagion: every close up is ominous, every frozen frame is a death.


[Spoiler Alert] The film closes with two different sets of images. First, we see Matt Damon, the husband who is immune from the disease and spends most of the movie protecting his daughter from infection. This attempt to protect the daughter from the disease largely takes the form of protecting her from her boyfriend. Contagion and sexuality are equated once again. In the final scene, after vaccine has been developed, Matt Damon buys a prom dress for his daughter and gives her the prom she never had. These images of home and wholesome teenage fun are followed by the revelation of the origin of the disease. We see Gwyneth Patrow, long since dead and dissected, posing flirtatiously with the chef who recently touched an infected pig. 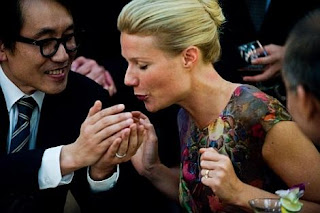 As much as the film presents us with "the real," with a painstaking realistic image of the horrors of a worldwide pandemic, it turns out that this presentation is mediated or refracted. It is not refracted by the zombies, Mayan prophecies, or invading aliens, but by morality. It associates contagion with promiscuity, both cultural and sexual, and immunity with the home, nation, and family. Its fantasy is not that the dead will walk the earth, but that viruses will mainly infect bad people.
Posted by unemployed negativity at 7:45 PM

Yes! This connection between the genealogical (or, more broadly, the contractual) and contagion is what's been preoccupying me more recently. Here's the preamble.

That is very interesting, thank you. (and how did you get a link in comments, I can never do that)