The Politics of Composition: A Few Thoughts on Occupy Wall Street 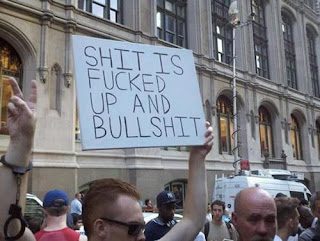 Franco “Bifo” Berardi’s After the Future opens with a question, a question that defines the current political moment. As he writes:
“Why, Why did the largest demonstration in human history, the antiwar Global Action that the movement launched on February 15, 2003, fail to stop the bombing of Baghdad?

Why was conscious collective action, although massive and global, unable to change things? This is the question I’ve been trying to answer for the last ten years…

I’ll say here, in short, that the answer is not to be found in the political strategy of the struggle, but in the structural weakness of the social fabric.

During the 20th century, social struggle could change things in the collective and conscious way because industrial workers could maintain solidarity and unity in daily life, and so could fight and win. Autonomy was the condition of victory, because autonomy means the ability to create social solidarity in daily life, and the ability to self-organize outside the rules of labor and exploitation. Autonomous community was the condition of political strength. When social recomposition is possible, so is collective conscious change.”

I will leave aside Bifo’s long answer to this question, a response that involves the technological and social transformation of labor. However, I will say that some version of the question of the relationship of political movements to the social structure, and social media, has been the dominant question of the last eight years. With every new occupation, every new protest, from the UK’s winter of discontent to Arab Spring to the summer of protest in Spain and elsewhere the same question has been asked or answered again and again: What are the possibilities of revolution in the new forms of social connection and social media? The answers run the gambit from technological utopianism, the “twitter” and “facebook” revolutions, to dystopia.

However, Bifo’s question is worth restating now and the emergence of another social movement, the Occupy Wall Street movement. Once again, as with the massive demonstrations of February 15, 2003, we see a population, the US population, long dismissed as passive and fragmented, acting and taking to the streets. There is optimism, but this optimism is tinged with two things that limit it. First, there is the lingering memory of February 15, a memory that leads to cynicism. Second, there is the fact that this movement has offered no demands. I actually think that these two things are related. I think that Occupy Wall Street, and the occupations around the country, are an attempt to build the social composition that are the precondition for action. They are the emergence of a problem that politics as usual works to suppress, the massive exploitation that is capitalism, and thus the emergence of politics adequate to address it. At this stage they are the connection of people, ideas, and machines, the creation of assemblages that might build something.

This response differs greatly from the response of Paul Krugman and the New York Times, who have both argued that it is OK that the movement has issued no demands because it is the job of politicians to articulate demands. The people are always an inchoate mass, who can only speak the affects of anger and frustration, it is the job of politicians to articulate this, to give form to matter. Krugman et als response, while it claims to be sympathetic, completely fails to see what is happening at General Assemblies across the country, people are running their own lives, dealing with the media, and discussing what is to be done without politicians. There is no need to wait for politicians to articulate demands, to make politics possible. As Krugman states elsewhere in his column:

“Bear in mind, too, that experience has made it painfully clear that men in suits not only don’t have any monopoly on wisdom, they have very little wisdom to offer. When talking heads on, say, CNBC mock the protesters as unserious, remember how many serious people assured us that there was no housing bubble, that Alan Greenspan was an oracle and that budget deficits would send interest rates soaring.”

The men in suits, those who are dismissing the current movement, have no wisdom to offer. True words, to which I would only add "Pundit, listen to thyself." This is exactly why the Occupy Wall Street movement cannot just become the inchoate rage that pundits, politicians, and economists can translate into policy. It must become a new way of articulating intelligence, of composing society.

That is the upside, an occupation that is really an education in direct democracy, in the solidarity necessary for action. However, at this moment, these “Occupations” are occupations in name only. The territory that they hold is done so with tacit or open support of the cities and police. There are indications that the police and cities are running out of patience. What happens next depends on what is being built now.


And Bifo's latest piece, which coins the unfortunate term Finazism but is otherwise very interesting.

Posted by unemployed negativity at 1:54 PM

Interesting question about the revolutionary potential of the current experiments in general assemblies and autonomous and non hierarchical groups. Check out the Zizek intervention posted on utube which aspiring asks about whther we currently have the means to write the next words ( his story of the red ink), I.e., whether we can actually practice new ways of living, and organizing--or not--our social relations in a system so adept at assimilating newness and spitting it out as another version of the old (new and improved). I think the question is not just about the inability to imagine movements that do not follow traditional models (leadership, message, goal, strategy, etc.) but the inability to "do" more than what will be subsumed. State centered politics have been the norm for 200 years; Hannah Arendt's on Revolution and Sorel's reflections on violence are so well aware of the revolutionary potential that is subsumed by party and state centered rationalities.... I wonder if the potentialities for transformations in social and cultural forms (meanings, values, affects, etc.) currently manifested in the Arab Spring, Occupy Wall Street, Spanish and other European "indignes" movements will not become subsumed, assimilated, or deflected by our habitual forms of fearing the new--accentuated by centuries of order-, stability-, safety-, happiness-, and etc.- centered dispositifs of subjectivization....

One of the most glaring problems with the supporters of Occupy Wall Street and its copycat successors is that they suffer from a woefully inadequate understanding of the capitalist social formation — its dynamics, its (spatial) globality, its (temporal) modernity. They equate anti-capitalism with simple anti-Americanism, and ignore the international basis of the capitalist world economy. To some extent, they have even reified its spatial metonym in the NYSE on Wall Street. Capitalism is an inherently global phenomenon; it does not admit of localization to any single nation, city, or financial district.

Moreover, many of the more moderate protestors hold on to the erroneous belief that capitalism can be “controlled” or “corrected” through Keynesian-administrative measures: steeper taxes on the rich, more bureaucratic regulation and oversight of business practices, broader government social programs (welfare, Social Security), and projects of rebuilding infrastructure to create jobs. Moderate “progressives” dream of a return to the Clinton boom years, or better yet, a Rooseveltian new “New Deal.” All this amounts to petty reformism, which only serves to perpetuate the global capitalist order rather than to overcome it. They fail to see the same thing that the libertarians in the Tea Party are blind to: laissez-faire economics is not essential to capitalism. State-interventionist capitalism is just as capitalist as free-market capitalism.

Nevertheless, though Occupy Wall Street and the Occupy [insert location here] in general still contains many problematic aspects, it nevertheless presents an opportunity for the Left to engage with some of the nascent anti-capitalist sentiment taking shape there. So far it has been successful in enlisting the support of a number of leftish celebrities, prominent unions, and young activists, and has received a lot of media coverage. Hopefully, the demonstrations will lead to a general radicalization of the participants’ politics, and a commitment to the longer-term project of social emancipation.

To this end, I have written up a rather pointed Marxist analysis of the OWS movement so far that you might find interesting:

“Reflections on Occupy Wall Street: What It Represents, Its Prospects, and Its Deficiencies”

THE LEFT IS DEAD! LONG LIVE THE LEFT!

I agree with most of the critiques, and there are definitely strong reformist elements to the OccupyWallStreet movement, ideas of capitalism without corporation, regulatory reform, etc. However, the unprecedented has already happened, people in the USA are criticizing the economic structure, and putting themselves on the line to do so. What happens next depends on many factors, but I think it is important to get involved and to make such critiques respectfully and patiently.

To break capitalism you need to break what is opposed to it, i.e. labor. That means you need to break what ties them together, i.e. work as a source of income coming from capital. We need to talk about the right to income, not the right to work. And income can come from other sources, like a redistribution of funds representing the use of the common resources. In short, social mechanisms like the basic income guarantee can truly change society, making work really free - and hence people free to chose the life they want to live.

Reading back on this post so many months later, it's interesting to see the way that things played out. Occupy and so forth was much stronger in the beginning than I could have imagined it would be. But its energies have all but dissipated, it seems.

On Bifo's After the Future, you might be interested in article I wrote, "Memories of the Future," on a time when there actually was still a future. Engages with a number of recent writings on the subject by Franco "Bifo" Berardi, Slavoj Žižek, T.J. Clark, Owen Hatherley, Chris Cutrone, Max Ajl, Asad Haider, Salar Mohandesi, Ben Lear, and Malcolm Harris, which have been published by AK PRess, Zero Books, Jacobin, New Left Review, and others.