Getting to 99: Between #OccupyWallStreet and Mic Check! 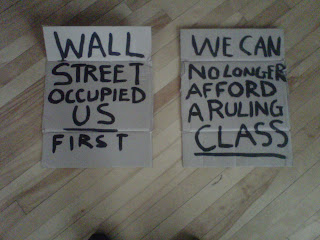 Signs I made for my local Occupation

The potentials and contradictions of the OccupyWallStreet movement are far too many to enumerate. They are nothing other than the potentials and contradictions of the current historical conjuncture. We should not be surprised that is has shown itself to be racist and patriarchal in places, after all we live in a racist and patriarchal society. Moreover, we should not be surprised that its anti-capitalism is highly ambiguous if not out an out contradictory, with cries of “capitalism not corporatism” coexisting alongside “Abolish capitalism.” We perhaps should be surprised that it exists at all.

Or should we? Given the high level of unemployment, foreclosures, and debt, perhaps we should be surprised that this has not happened sooner. For the past three years, since the collapse of the housing market crisis, we in the US have been living in a kind of “Bizarro” world, or an inverted world, if you prefer Hegel to Superman: people have been taking to the street, but they have been protesting excesses of taxation and government spending, not to mention a “socialist” president, demanding more austerity. Statistical studies showed that these “Tea Parties” were not, at least for the most part, movements of the unemployed or foreclosed, they were movements of the middle, of those with jobs and retired, desperately holding unto their status. Meanwhile, the rest of the world, especially Europe and Latin America, saw massive protests against the economic crisis and the austerity measures that followed it. The US is just catching up. 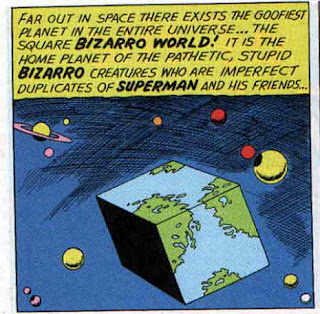 The US lags behind the rest of the world not just in terms of the massive protests in the streets, and the occupation of squares, but also in terms of what people are occupying for. This is most clear in the case of education and health care. Public support for higher education in this country has been whittled away to the point where it exists in name only, with students taking out massive debts to fund their education. Health care is also thoroughly private, and a source of massive debt. The cuts that some are struggling against have already take place here. The US is, as Marx wrote, something of an anachronism, if we negate powdered wigs, we still have unpowdered wigs to contend with. (I realize that that last bit does not really help, I have just always wanted to use that quote).

Much could be said about this lag, both in terms of the long history of the US and in terms of the current moment. However, I am less interested, and capable, of doing this here. I am more interested in thinking through this moment and what is possible.

As I have mentioned before what is perhaps most interesting about the movement is the use of direct democracy in the general assemblies and multiple occupations. This breaks with a long tradition of large, hierarchically organized demonstrations, the various Marches on Washington, which always had their support demonstrations. Those demonstrations only viewed people as numbers, as something to be counted, hence the squabbles and debates with police over crowd numbers. The various occupations allow people to be something other than a number, a vote or a number in crowd, and that is a big part of their appeal. They offer people a chance to participate in their own lives, even if that life is just a few feet of tarp.

Even the New York Times has noticed the way in which the immediacy of place and contact has sustained this movement. The “Mic Check” or “Peoples Megaphone” is an immediate instantiation of solidarity, of speaking with one voice. Alongside these immediate and local occupations there is also the hashtag #occupywallstreet, which some people have used as a shorthand for the movement itself. The movement is not just a about people directly speaking to one another, but it is also about twitter and livefeeds. There is a combination of the low-tech and high-tech, of people meeting and talking and posting and sharing.

There is interesting potential in this combination of the local and the global, but also tension. First, it is possible that these different occupations will begin to take on different characteristics, even different tactics, shaped and transformed by the individuals that get involved as well as the history of the different regions. This has already started to take place, with some groups reacting differently to their police and local governments. Direct democracy demands this difference, but can the movement sustain it. Secondly, there is the tension between the tenor of face-to-face conversations and that of facebook comment threads. Can temperature checks coexist with flame wars?

There is an interesting contradiction between this ideal of direct democracy, a democracy without leaders or representation, and the slogan of this movement, “We are the 99%”. I have even heard this chanted as "We are the 99%, You are the 99%" as marchers attempt to address (and interpellate) those they pass  as part of the same movement.  The reference is to the top 1% that control something like 43% of the wealth. This number has an obvious populous appeal and it would seem to reflect a view that it is a matter of all of us against the 1%, against the parasite of financial capital. This particular division could be contested, especially since the 99% includes many of the wealthy managerial class and some very wealthy people. I for one would not mind seeing it lowered a bit. However, my point here is not to squabble over numbers, the real tension, and real problem has to do with this particular representation of class, if it could be called that. 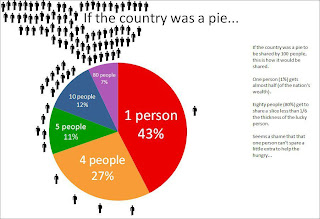 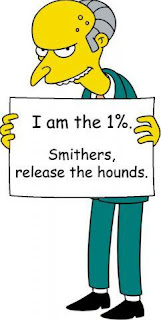 Even at the level of 99% there are a great many people who would fit in that category but do not identify with it. This can be seen in the case of the ridiculous “We are the 53%.” As is so often the case with the right, this shifts the discussion of exploitation to that of taxation and the spectre of lazy people living off of "our hard work." As ridiculous as this particular meme is, however, it must be taken seriously. Many Americans identify with the 1%, or the 10%, or whatever, the entire media, entertainment, and political establishment is practically dedicated to such an idea. The entire Ideological State Apparatus, is caught up in one chorus, singing a song that tells everyone that they too can and will get rich. For the 99% to become the 99%, for it to become at the very least a broad popular basis for change it must confront the entire ideological underpinning of our society, the underpinnings which make it possible for the poor to identify with the wealthy. As one recent blog post points out, this underpinning is not just ideological but affective as well. Anyone who has lost a job, who has been downsized, understands the shame that this carries in our society.

Confronting this ideology, this imaginary identification with the interest of the wealthy, means confronting racial privilege as well as the ideology of the middle class. The question then is how to use the combined tools of direct democracy, the occupations and the power of face-to-face conversations, as well as the global internet, to change the way people think (and feel) about privilege and power.
Posted by unemployed negativity at 3:12 PM

I especially like this comment. American protest movements over the last few decades have seemed conspicuously unable to speak to class issues, and it appears that the closest we'll ever get to talking about actual capital accumulation is this 99% slogan. Unfortunately, I fear that the two traps on either extreme of the issue (blaming greedy bankers for the left, power-hungry bureaucrats for the Paul-ites) will eventually win the day.

The whole idea of a the 99% seems to tap into America's deep sense of democracy as majority rule. It seeks to connect 99% of the population with the idea of a silent, or silenced, majority. In that way it is effective. However, as I pointed out, it needs to move beyond such a quantitative evaluation. The 99% is an abstraction, and an ideal. To move beyond that it seems necessary to grasp the realities that shape class in this country. Or else, as you point out, the 99 will just become rhetoric for one of the major parties.

Great post. Seems the protests must supply an almost surreptitious way for class-wary Americans to think about class and change the terms of the class struggle that they'd rather pretend the US was somehow exempt from

American Dreaming can only last so long; then you realize its all wrong.

To the original poster: In regards to the latter part of your post, I see where you’re coming and I’m right there with you. Basically, it seems you’re a proponent of Gramsci’s cultural hegemony theory and imply that its in practice within the United States. I’ll tell you this… if the current “middle class, American Dream, etc…” ideology dies, I won’t complain. It’s a necessary ingredient to systemic change.

Moreover, you’re right; this movement is currently a curious hodgepodge of societal problems of the last several decades. As a product of the 90s cultural wars, right now the movement is trying to be more than politically correct, its attempting to be politically perfect. Its almost laughable. I can’t attend an occupation without laughing because its truly a spectacle. And for a record, the values being promoted by this movement are historically liberal. Why can’t this be articulated? Its just further testament to how tarnished the terms liberal and left have become. And for the record, I laugh not because I’m not sympathetic. I am liberal/progressive so I’m a minority. That’s how I’ve upheld my values and continue to do so within the past and present cultural climate. I forced myself to accept that my perspective was in the small minority in order to remain sane and not feel so isolated. So I am sympathetic and hopeful. I’m a fixture of the occupation in Philadelphia. Its just funny to see this whole thing play out. The social justice aspect will be a big hurdle that needs to be successfully jumped or it will be a huge obstructing mountain that the movement will try to hilariously go around without confronting…

“Cultural hegemony is the philosophic and sociological theory, by the Marxist philosopher Antonio Gramsci, that a culturally diverse society can be dominated (ruled) by one social class, by manipulating the societal culture (beliefs, explanations, perceptions, values) so that its ruling-class worldview is imposed as the societal norm, which then is perceived as a universally valid ideology and status quo beneficial to all of society, whilst benefiting only the ruling class.[1][2]”