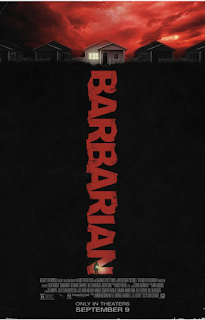 Every mention of the film Barbarian carries with it the warning to not spoil anything, to experience it completely ignorant so as to be best frightened by its particular twists and turns. [Fair Warning: I will spoil everything here] For that reason it is not entirely clear if the title refers to anything. It could just be a vaguely menacing word. Many horror movies from the last few years seem to take their title from a series of such words, Insidious, Malignant, Terrifier, as if someone was just looking up “evil” or “scary” in a thesaurus. The opening scenes of the film, however, suggest that this title is not just a vaguely scary word, after all, it would be an odd choice suggesting that the we are running out of synonyms for scary, but that the film is very much about what it means to be a barbarian and what it means to be civilized.
Read more »
Posted by unemployed negativity at 7:35 AM No comments: 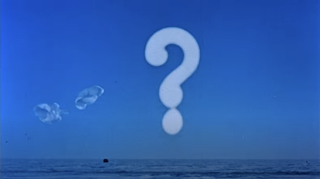 The ending of the original The Blob
I have a distinct memory of watching the original The Blob on a Saturday afternoon movie. I watched a lot of Saturday afternoon movies, Godzilla, all of the Universal monsters, and various giant ants, crabs, and praying mantis. The Blob stood out because it was actually frightening in a way that a giant monster crushing a city was not, and because its ending, in which a frozen blob was dropped someplace north of the Arctic Circle was followed by a giant question mark hovering over the sky, lingered in my mind. At the time it seemed like the perfect way to end a horror movie, with the horror still intact. I must admit as well that Steve McQueen's last line, "As long as the Arctic stays cold," sounds much more ominous these days.
Read more »
Posted by unemployed negativity at 11:29 AM No comments: 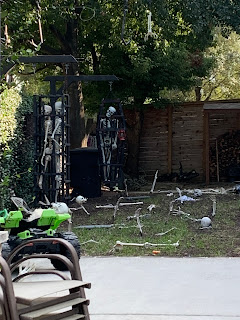 Halloween in Houston
The Following is a response to Vardoulakis book Spinoza, The Epicurean that I gave at SPEP. I previously blogged about the book.
One of the many merits of Dimitris Vardoulakis’ Spinoza, the Epicurean: Authority and Utility in Materialism is that it focuses on the question of obedience as central to the Tractatus Theologico-Politicus. Obedience is what differentiates revelation from knowledge, scripture from philosophy, action from belief. On one side, the first of these terms, there is obedience, that which falls under the control the state, and on the other freedom, the domain of philosophy. However, such an assertion would suggest obedience is a simple matter, that the line between obedience and freedom can be sharply drawn. Vardoulakis suggests that obedience must be understood through a dialectic of authority and freedom. As Vardoulakis describes this dialectic:
Read more »
Posted by unemployed negativity at 9:36 PM No comments: 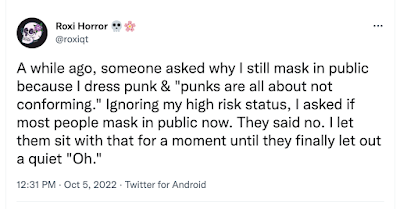 To wear a mask in a store, bus, classroom, or other public space is now to be in a small, and dwindling minority, as much as this might vary from place to place. Aside from a few holdouts, doctors offices, the place where I get my haircut, and so on, there are no mandates requiring masks anymore. That it is a minority, and a choice, is not the way that it often appears, at least to those who do not wear masks.
Read more »
Posted by unemployed negativity at 8:11 PM No comments: