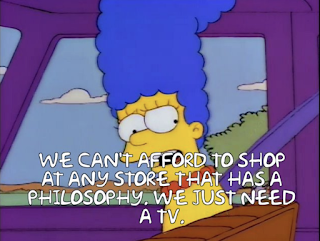 Not a good episode, but a great observation
There are those that claim that Marx’s criticism of capitalism is ultimately grounded in a moral or ethical consideration of humanity, that notions such as alienation, exploitation, and so on, only make sense against the backdrop more often assumed rather than asserted, of some kind of morality, of a picture of an ideal life, in which human beings are treated more or less as ends in themselves. Marx investigations of the horrendous working conditions of early capitalism, from child labor to deadly working conditions, would seem to have as its critical basis a moral understanding of humanity. However, what I would like to propose is that Marx’s thought, at least at its most provocative, is less a moral criticism of capitalism, than a materialist criticism of moralism.
Read more »
Posted by unemployed negativity at 7:20 AM No comments: