Everyday I Write the Book: Macherey on Hegel, Marx, and Debord 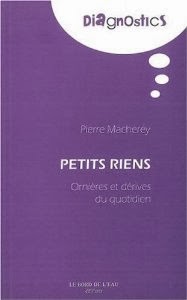 Of the five who participated in the original edition of Lire le Capital, Louis Althusser, Etienne Balibar, Jacques Rancière, Pierre Macherey, and Roger Establet, Machery is not very well known in the US. While Rancière has become one of the French thinkers of the moment and Balibar is regularly translated, only the sociologist Roger Establet is less well known. This is unfortunate because it might be possible to argue that of the four, not counting Althusser, Macherey has been concerned with philosophy must explicitly. This might sound strange to those in the Anglo-American world who primarily know of Macherey from his translated works on literature, For a Theory of Literary of Production and The Object of Literature. However, this focus on philosophy can be seen in his published monographs, Hegel ou Spinoza, the five volume study of Spinoza’s Ethics, and the short books on The Theses on Feuerbach, as well as the essays in Histoires du dinosaur, which continue Althusser’s theses regarding philosophy as a practice and class struggle.

Since the publications of those books, and during it, Macherey has been teaching a seminar titled Philosophe au sens large (“Philosophy in the large sense”), which is dedicated to various themes that traverse philosophy, literature, sociology, history, and political economy. This is in sharp contrast to the Anglo-American practice which could be described “philosophy in the smallest possible sense,” reducing philosophy to a set of limited normative and logical questions until it could be safely drowned in the bathtub. The courses, which include lectures by Macherey as well as guest lectures by other philosophers on everything from Einstein to Judith Butler are a great resource for anyone who reads French.

A selection of these lectures, Macherey’s contribution, to the year (2004-05) devoted to the concept of the "everyday" (quotidian) has been published as a book, Petits Riens: Ornières et derives du quotidien. The lectures cover the usual suspects associated with the concept of “everyday life”: Lefebvre, Debord, de Certeau, and Freud; as well as Pascal, Hegel, and Marx; and such literary figures as Joyce and Leiris. The book is structured around a series of lectures, and I must admit that I have not read all of them. I started the book to read the lecture on Hegel, since I am curious about Macherey’s recent turn to Hegel, but I found it difficult to put down.

What follows are a series of observations/provocations from this book:

First, Macherey frames the problem of the “everyday” or “everyday life” through two dialectics. The first could be called the “Thales/Heraclitus dialectic” drawn from the two classical figures named. Thales, as the story goes, was so preoccupied with looking towards the heavens that he fell into a well. In contradiction to this there is the story of Heraclitus, who declared, when a group of visitors were surprised to see the philosopher warming himself by the fire, “The Gods dwell here also.” Philosophy distances itself from the everyday, or attempts to discern the hidden logic of the most mundane activities. There is thus a fundamental ambiguity to this attempt. As Macherey writes:

“There is an equivocal dimension of the reality of lived daily life that is impossible to eradicate, which condemns the quotidian to the status of a quasi-object, not susceptible to being examined directly: the consequence of this is that, if one engages in a philosophy of everyday, there is the risk of thinking instability, movement, flow, where only partial synthesis operate, immediately placed in question, and where the results cannot easily be made the object of a global synthesis.” (apologies for the sloppy translation)

The second dialectic has to do with how the “everyday” is conceived: either as passivity, as pure repetition of customs, habits, and patterns; or as pure activity, as a thousand tiny inventions. This dialectic, also ambiguous, of activity and passivity can be seen in the political philosophies of the everyday, Lefebvre, Debord, and de Certeau.

As I have noted, the first lecture/essay, after the brief thematic introduction, is on Pascal. This might seem strange given that “everyday life” is often understood to be a concept of modernity, an experience that takes place against the backdrop of abstract labor and standardized commodities. This is explicitly the case in Lefebvre and Debord, but is even implied in Heidegger, mentioned only in the introduction, whose “Das Man” and circumspect comportment always read like a critique of modernity smuggled into the ontological investigation. Pascal then would seem to be out of place historically. However, Macherey locates in Pascal an essential aspect of the thought of the everyday: diversion. Diversion is the simple fact that mankind is occupied, distracted even, by a variety of interests and tasks. This is mankind’s fallen nature, but this capacity to be preoccupied in this or that amusement is mankind’s transcendence of any specific given nature. This inessential essentially, the absence of any determined task, defines humanity, Macherey refers to it as “anthropo-theological,” the proximity of being fallen and saved. In the first case we are dealing with a theme that runs throughout the history of philosophy, in which mankind is defined by a certain indetermination, a deficiency of environmental stimuli, to put it in Paolo Virno’s terms. As Macherey latter argues, returning to Pascal in some of the subsequent lectures/essays, the everyday shares some of these same qualities with this definition of the human, especially in the work of Lefebvre for whom the everyday is untotalizable totality. It is what remains after the specific activities and objects of human life have been abstracted, art, science, etc., but this remainder is essential.

Macherey’s reading of Hegel focuses on the ruse of reason, which is not what I expected. One would expect any discussion of Hegel and the everyday to focus on Hegel’s discussion of the quotidian dimensions of the family and civil society in the Philosophy of Right. This is especially true of Macherey, who coauthored a slim volume on Civil Society with Jean-Pierre Lèfebvre. Macherey argues that the “ruse of reason” is Hegel’s philosophy of the everyday; it is precisely the process by which a limited action, focused on its specific means and ends, brings into existence something other than itself. The passage that Macherey turns to is §209 from The Encyclopedia Logic: “Reason is as cunning as it is mighty. Its cunning generally consists in the mediating activity which, while it lets objects act upon one another according to their own nature, and wear each other out, executes only its purpose without itself mingling in the process.” This teleological logic, as Lukacs has argued, is the logic of labor itself, which must surrender itself to the limits of the tools and material to produce anything. Labor does not so much master the world, as mastering it by surrendering to it, transforming the world by learning its principles and causality. This makes possible a specific staging of the Marx/Hegel encounter. For Macherey, Marx’s objection to Hegel has little to do with “rational kernels and mystical shells,” rather it has to do with the transition from Chapter Seven of Capital: Volume One between the “labor process” and the “valorization process.” In the first case we are dealing with a teleological logic between a subject, instrument, and object: the subject transforming the object, and ultimately the self, through the intermediary of the instrument. The valorization process, which is to say capitalism, decenters this intentionality, fragmenting work to the point where the worker becomes a “conscious organ.” There is no longer a telos of intentionality, at least one that rests in the mind and hands of a worker. Thus, we can ask with Macherey, if labor is our model of rationality, of the ruse of reason and historical process, what has the transformation of labor done to the very idea of rationality.

Macherey doesn’t directly ask this question, moving onto other figures of the everyday. However, the ruse of reason does return in the later lectures; in fact, it is possible to read Macherey’s lectures on the critical turn towards everyday life in the works of Barthes, Lefebvre, Debord, and de Certeau, which make up the final section of this book, as one long meditation on this ruse. Which is to say that all the thinkers consider everyday to be the point where daily struggles confront the larger rationales and structures of social existence. This confrontation is riddled with ambiguity of activity and passivity referred to above. As Lefebvre writes of his project, “Our particular concern will be to extract what is living, new, positive—the worthwhile needs and fulfillments—from the negative: the alienations.” What emerges in these critical works, and this has everything to do with their historical moment after the second war, is everyday life as a sphere of life characterized by a sharper duality than the ambiguity of passivity and activity, it is colonization versus rebellion. It is Debord that pushes this tension the furthest, the spectacle is nothing but the colonization of daily life. I am not going to go into all of Macherey’s reading of Debord, but there are some interesting remarks regarding Debord and Feuerbach as well as Sartre. What is most striking, given the earlier section on Hegel’s ruse of reason as a logic of everyday life, is the manner in which the situationist strategy of détournemount, altering the texts and images of the various commodities of the spectacle, returns as a kind or ruse of reason, a negation of negation, but an incomplete one. With détournemount one works with definite materials, with the inherent limitations, but what emerges is not a realization of reason. At best the “detouring,” the shift, opens the gap between the spectacle and everyday life, between the passivity of everyday life and its invention.

That is all I have for observations. By way of a conclusion I offer a scene from one of my favorite works of detournement, Can Dialectics Break Bricks?


Posted by unemployed negativity at 7:01 PM

This is the best polemical line I've read in a while: " Macherey has been teaching a seminar titled Philosophe au sens large (“Philosophy in the large sense”), which is dedicated to various themes that traverse philosophy, literature, sociology, history, and political economy. This is in sharp contrast to the Anglo-American practice which could be described “philosophy in the smallest possible sense,” reducing philosophy to a set of limited normative and logical questions until it could be safely drowned in the bathtub." I'm totally going to steal that!

Yes, well that is no small praise coming from the author of one of my favorite polemical lines. I am referring to "In America even the Marxists are liberals" or something to that effect. Thanks.