Everyone is Kettled: Lordon on Marx and Spinoza (with some reflections on the current conjuncture) 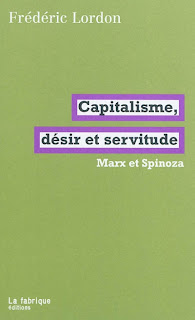 Frédéric Lordon’s Capitalisme, désir et servitude: Marx et Spinoza is not so much a book on Marx and Spinoza, on the influences and affiliations that would connect them, but a book that immediately puts Spinoza’s philosophy to work within Marx’s problematics. It is similar in this respect to Franck Fischbach’s La Production de hommes: Marx avec Spinoza. The major difference being that the while latter book is primarily concerned with ontology, with production, nature, and the subject, Lordon’s book is primarily concerned with politics and the current conjuncture.

Lordon could be understood as connecting the lines between Spinoza’s often cited question, “why do men fight for their servitude as if it was salvation?” and the general problematic of subjection in Marx. Which is to say that Lordon is interested in how it is that people not only tolerate exploitation, continuing to reproduce the system, but actively desire it. Lordon is interested in precisely the way that contemporary capitalism, or neoliberalism, has moved beyond Marx’s concepts of exploitation and alienation to involve an active participation in one’s subjection, exactly what Spinoza question, and his examination of the affects, would seem to analyze.

The general problem of society, any society, is the articulation of its particular conatus, its particular striving, or functioning, with that of the individuals and collectives that constitute it. For society to function we must desire to do so, and we do this because we must believe that it is the necessary condition of our desires. Lordon dubs this problem, or its solution, colinearization. One of the most important factors of colinearization in capitalism is money itself. For Spinoza anything that is believed to be the cause of joy, of the increase of one’s power, is an object of love. Thus, it is possible to consider money as the “universal equivalent of desire,” as the object which is seen as the cause of any possible joy, any possible desire. Money captures desire and imagination.

Perhaps one of the most interesting remarks that Lordon makes has to do with precisely how he understands the politics of the imagination. Lordon cites the passage from Spinoza in which he argues that there is no opposite of excessive self-esteem. It is possible to overestimate oneself, and to some extent this overestimation, mankind as "kingdom within a kingdom" is the human condition. As Spinoza writes,

Thus, to use the language of pop psychology, there is thus no such thing as “low self-esteem.” If one thinks that one cannot do something, then one effectively cannot do it. The imagination is a material force that determines one’s conduct.

There are thus two strategies for colinearization, for making the desire of individuals conform to society. The first is a kind of imaginary fullness, as in the case of money as the object of desire. It is full because through it the given social order represents itself as the possible realization of every desire. The second draws the limits of what is possible, curtailing modes of thinking and living. These limitations, the poverty of the imagination, has real material effects,.The central message of any social order, reflected in its practices, ideologies, and actions is “everything is here, nothing else is possible.” Society, or should we say capital, is the kettling of the imagination.

The determining and delimiting of the imagination is not alienation. It is one of the merits of Lordon’s book that he is so attentive to Spinoza’s position with respect to the bourgeois homilies of self, interiority and freedom. He argues that Spinoza’s capacity to “affect and be affected” is always realized, always actualized. There is no reserve in Spinoza’s ontology. Lordon follows Pascal Sévérac in arguing that Spinoza’s merit is in abandoning all themes of alienation or separation, themes that still show up in Deleuze (not to mention Fischbach), in favor of fixation. No one is every really separated from the powers, from their capacities; these capacities are just fixated into particular objects and goals, objects which are defined by the poverty of the social imagination.

The outside of fixation, of a limited and curtailed imagination, cannot come from a reservoir of freedom, from a subject outside of history. It must come from within the order itself. Lordon’s answer to this is Spinoza’s concept of indignation, “the hate towards someone who has done evil toward another.” Indignation, expanded to encompass the affective hatred for the existing order, is something precarious, produced by a series of encounters and frustrations, extending throughout the social body through a series of encounters. Indignation does not come from the outside, from outside of the social order, but is produced internally, by any orders limited conception of desire. As such it is not some return to an originary freedom, but only a “détournent du détourement,” a deviation of the already established goals of society to something other.

That is precisely the question: what is this something else? Or, more importantly, how can it be produced? Spinoza’s immanence reminds us that our minds our limited by our imagination, which are in turn limited by our bodies, which are in turn limited by our minds, and so on. The intersection of all of these determinations is also the intersection of different sites for transformation. We imagine that nothing is possible, that nothing can be done, but only up to the point that someone actually does something. Once that happens, once there is an opposition to an existing order, a Paris Commune, a May '68, etc., In such moments the very limits of the world, of what is possible, are redrawn. However, these fleeting moments of possibility, the indignation of the moment, need new thoughts new bodies to sustain them. According to Lordon, the transformation of bodies by the imagination and the extension of indignation into organization is the work of politics.

David Graeber's remarks on politics, the cuts to the university, and the imagination inspired much of this, and are well worth listening to.

Posted by unemployed negativity at 6:06 PM

Another stimulating blog post, Jason. Thanks. I was wondering if you thought Marcuse's views about the containment of imagination were still steeped in the ontology of alienation, or if he recognized some of the phenomena Lordon takes up in which we desire the system that enslaves us.

A few passages from One-Dimensional Man were relevant, I thought. I was thinking about his notion of the "totalitarian logic of accomplished fact," that seems to resonate with the kettling of imagination. What happens to be the case is the only rational alternative, except for more of the same. "A qualitatively new mode of existence can never be envisaged..." and the rationality of the system eventually creates "a truly totalitarian universe in which society and nature, mind and body are kept in a state of permanent mobilization for the defense of this universe."

Marcuse's "repressive desublimation" also seems to me to be an attempt to explain how our desires are shaped by the system that satisfies them. The more we are allowed to express violence and sexuality "freely" in our consumptive lives, Marcuse says, the more we are willing to submit to unfreedom in other social and political spheres. Desires for things other than what the system can satisfy are "irrational" or perverse.

He addresses imagination explicitly in the final pages of ODM. "Imagination has not remained immune to the process of reification. We are possessed by our images, suffer our own images...The mutilated individuals (mutilated also in their faculty of imagination) would organize and destroy even more than they are now permitted to do. Such release would be the unmitigated horror--not the catastrophe of culture, but the free sweep of its most repressive tendencies. Rational is the imagination which can become the a priori of the reconstruction and redirection of the productive apparatus toward a pacified existence, a life without fear. And this can never be the imagination of those who are possessed by the images of domination and death." And he then poignantly asks how "administered individuals" can "liberate themselves from themselves as well as from their masters."

I'm sure there are some important differences between Lordon's and Marcuse's positions, and I'd love to hear your take on that. Lordon looks interesting in any case. Are you working on a translation, by any chance? I really need to read Spinoza! Thanks again.