We Other Cannibals: Viveiros de Castro and Deleuze and Guattari 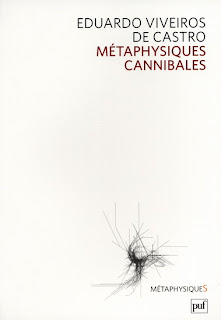 I have always been more on Team Anti-Oedipus than Team A Thousand Plateaus. Partly this is autobiographical. I read Anti-Oedipus at a very impressionable time, too soon--in undergrad. I picked the book at City Lights in San Francisco partly because Hampshire Professor Margaret Cerullo had a blurb on the back. (This was the old Minnesota copy with the cover designed by Harold and the Purple Crayon.) At the time I was trying to navigate the world of "theory," designing my own major which combined anthropology and philosophy. I was positioned to understand less than a quarter of it, but the rest I thoroughly enjoyed. I stayed up all night on a red eye reading it. The other reason that I have continued to gravitate towards Anti-Oedipus, writing on it and teaching it, is that I felt that I could do more with it, plug it into my various conceptual machines, producing readings of primitive accumulation and Marx's ontology. In contrast to this A Thousand Plateaus seems to descend down so many rabbit holes that I cannot follow. I just don't know enough about birdsong and geology (another reason that I will never be a speculative realist, I suppose).

This little autobiographical opening seems to be the necessary context to approach Eduardo Viveiros de Castro's Metaphysiques Cannibales. At least it is my context. Viveiros de Castro's context is that of the situation of anthropology and its relation with philosophy. At its high point ethnographic anthropology claimed to represent the various cultures in the world, constructed a picture of humanity through its multiple refracted lenses, while in its low point, the moment of its self-critique, it was argued that these pictures were nothing more than reflections of the West's own preoccupations and colonial projects. (At this point I should mention that Viveiros de Castro almost titled his book Anti-Narcissus, which is a great title). Viveiros de Castro seeks another way of thinking the relation between anthropology and philosophy, a relation of neither transparent relation to an object or endles reflection of the subject. Viveiros de Castro proposes to examine the intersections where ethnography reveals multiple ontologies and where philosophy says as much about its culture as the world it purports to comprehend. As he writes, citing Roy Wagner,"Every understanding of another culture is an experiment with one's own." 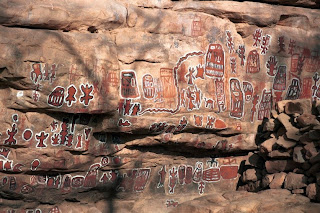 This axis, coupled with the focus on anthropology, makes it possible to frame the relation between these two texts differently. As Viveiros de Castro argues, Anti-Oedipus critique of Oedipus is in part framed interms of privileging filiation over alliance. Filiation is figured as the "intense germinal flux" as an intensive production that is prior to, and the condition of the extensive marking of persons and relations that define alliances. Everything is production prior to being marked, exchanged, and consumed. Filiation is intensive, alliance is extensive. The task of every socius, to code desire, can then be understood as containing the intense potential of desiring production, subjecting it to the order of alliance, to the family and reproduction.

A Thousand Plateaus, or at least the tenth "plateau" on Becoming-Animal, shifts the terms. Alliance is no longer associated social reproduction, with the coding of society, but with transformation, becoming.  Viveiro de Castro reminds us that Deleuze and Guattari's understanding of becoming is framed between   Levi-Strauss's understanding of sacrifice and totem, between two different ways of understanding the human nature relation: "the imaginary identification between human and animal, on one hand, the symbolic correlation between social differences and natural differences, on the other." The alliance that is found in sorcery, in literature such as Moby-Dick, is neither an identification of man with nature, nor nature with society, but a transformation of each. As Deleuze and Guattari write, "Becoming is certainly not imitating, or identifying with something; neither is it regressing-progressing; neither is it corresponding, establishing corresponding, establishing corresponding relations; neither is it producing, producing a filiation or producing through filiation. Becoming is a verb with a consistency all its own; it does not reduce to, or lead back to, "appearing," "being," "equaling," or producing."

As Viveiros de Castro writes, "The concept of becoming effectively plays the same axial cosmological role in A Thousand Plateaus that the concept of production plays in Anti-Oedipus." In each case the term in question is opposed to the order of representation, but it is opposed differently. As the citation above indicates, the shift from production to becoming is also a shift from filiation to alliance as the privileged term.  Filiation is no longer the intensive excess, but the imaginary genealogy that constructs identity and continuity out of the various alliances. "All filiation is imaginary, say the authors of A Thousand Plateaus. We can add: and all filiation produces a state, is a filiation of a state. Amazonian intensive alliance is an alliance counter the state (hommage to Pierre Clastres)." The critical perspective shifts from alliance to filiation just as the critical focus of the two volumes shifts somewhat from capital to the state.

At this point it seems like it is a relatively simple manner of a shift from production to becoming, filiation to alliance, but, as Viveiros de Castro argues, there is always more than two. There are always both intensive filiations, filiations that exceed any legacy of state, family, or society, and intensive alliances, like those of sorcery and transformation. I should say that in the final analysis there are both intensive and extensive dimensions to each social relation, but, as Viveiros de Castro argues, Anti-Oedipus does not seem to allow for the latter, which makes the second volumes focus on alliance as a kind of becoming even more striking. The particular way that "one divides into two" in this case becomes important. Or, more to the point, it becomes important, when it is brought in line with the social , or economic dimension, of each of these concepts: namely, production/filiation and exchange/alliance. The task of Anti-Oedipus was to think a production irreducible to teleological and instrumental logics of production, breaking production from the "mirror of production," while the task of A Thousand Plateaus (at least some of the latter plateaus) is to think exchange irreducible to possessive individual foundations of the social order. The former is integral to at least the autonomist Marxist tradition and its emphasis on "living labor," while the latter is integral to much of the history of ideas of gifts and debt from Marcel Mauss to David Graeber.

There is much more that could be said about this book. I have only really touched on its rereading of Capitalism and Schizophrenia that makes up the middle section, and have said little about its discussion of Amazonian ontologies (in the first section) and re-valorization of Levi-Strauss beyond the structuralist image (in the final sections). Suffice to say the book makes a strong case for the disjunctive synthesis of ethnography and philosophy, a case that is timely given the return to philosophical anthropology in the work of Etienne Balibar and Antonio Negri.
Posted by unemployed negativity at 7:15 PM

Email ThisBlogThis!Share to TwitterShare to FacebookShare to Pinterest
Labels: Deleuze, Guattari, Me

Thanks for the summary of Viveiros de Castro's book. Sounds like something I'll want to check out.