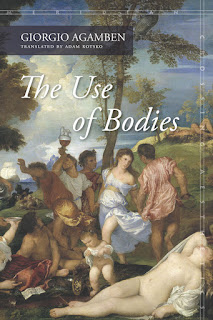 
Although Agamben's assertion has all of the epochal hyperbole of much of his writing, with the "West" and its destiny, this particular passage is one of his excursuses, set off from the main argument. Two things can thus be said about this passage taken in isolation. First, by way of comparison, it frames a fundamentally different anthropology than the one developed by Etienne Balibar. For Balibar, Aristotle is the foundation not of the modern anthropology of the free man, but the example of the ancient ideal in which there is equality only among equals, and thus the slave (along with women, children, and vulgar craftsmen) must be excluded from politics. To cite myself from The Politics of Transindividuality. (Hey if Zizek can do it, so can I, at least I admit that I am just cutting and pasting from something else I wrote).

For Balibar, the history of political anthropology can be broadly divided into three epochs according to the relationship between anthropological difference, the figure of the human, and political belonging. The first, the ancient epoch, is one ‘in which the concept of the citizen is subordinated to anthropological differences, to the unequal status of the free man and slave.’ The canonical example of this would be Aristotle’s discussion of natural slaves and rulers in the Politics. The second, modern, epoch would be that of the identity of the figure of man and citizen, of anthropological universality and political universality; the canonical formulation here would be ‘all men are created equal,’ even if this ideal, inscribed in the various texts and constitutions of the modern period, continued to exists alongside what were often unstated exceptions (specifically slavery and the status of women).The final period, the one that we are living in now, is one in which this equation is being questioned, not in terms of a return of the old inequalities, at least not directly. Its questioning is framed by elements of existence that do not lend themselves to such formal universalization, such as sexual difference; those that unravel the very schema of the individual, specifically the transformations of knowledge and its reproduction, that undermine the very identity of the self governing individual. What Balibar calls “intellectual difference.”

Balibar is quick to point out that these epochs are less periods, with sharp lines of demarcation, than overlapping elements of the conjuncture.

Let us nonetheless note here that, if these epochs succeed upon one another, or engender one another, they do no supplant one another like the scenes of a play: for us, and consequently in our relation to the political question, thy are all still present in a disunified totality, in a noncontemporaniety that is the very structure of the “current moment,” which means that we are simultaneously dealing with the state, with the class struggle, and with anthropological difference.
These conflicting epochs are then different articulations of inequality, formal equality, conflict and difference. Moreover, they are located at different levels, situated across the economy, politics, and the very figure of human nature. In contrast to this Agamben suggests, and it really is the suggestion in the passage that I am concerned with here, not the whole argument of the book, or Homo Sacer for that matter, that the "slave" or the figuration of dependency and inequality constitutes the repressed of the formal democratic tradition. If it is repressed, and if the reference to Freud means anything, that its return must be in terms of symptoms and slips. One could read the history of philosophy this way, and thus interpret the various returns of the figure of the slave or the worker in the anthropology of the free man; I am thinking specifically of Locke's "servant," As Locke writes, “thus the grass my horse has bit, the turfs my servant has cut, and the ore I have digged in any place…become my property without the assignation or consent of any body.” The servant is as strange exception in the midst of the very rule he is being used to illustrate, that of bodily labor as the basis for property and appropriation. He is a kind of Freudian slip, an out of place comment, that reveals the figure of the slave, or the worker, as the repressed basis of the free individual of social contract theory. Thus, somewhat paradoxically, it is Agamben not Balibar who articulates a kind of symptomatic reading of the Western philosophical tradition. Or, to push both in the more Marxist direction, we must recognize that the entire tradition of political philosophy is based on an exclusion of that particular form of life, or anthropological figure of the worker.
Posted by unemployed negativity at 12:04 PM