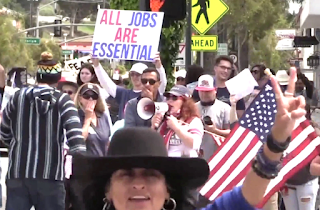 I had played with the concept of idea of what I called "right workerism," the way in which work, and the value of work, became not a critical perspective on capitalism but its justification previously on this blog. The protests against lockdowns in various states has provided the opportunity to reflect on its meaning again.

Some skepticism towards these protests are necessary. First, there is evidence to suggest that they are "astroturf," grassroots in appearance only and actually funded by conservative organizations. Second, many have noted that these protests seem to be less aganist the cessation of work than the cessation of consumption. People want to go back to consuming, not good back to work. This would at least explain the signs demanding haircuts, massages, and other services. 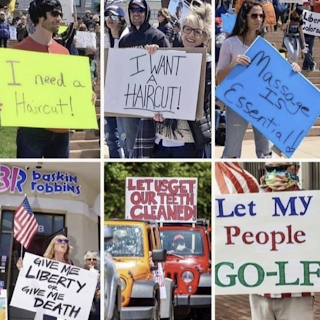 The idea that consumption, or the consumer, would be pitted against the worker is an observation at least as old as Marx's Capital. When Marx observed that the sphere of exchange was the sphere of "freedom, equality, and Bentham," he was demonstrating that consumption produces a different way of looking at the world, a different  ideology, and even a different subjectivity. What Marx stressed was the difference between sphere of exchange and that of production. In the former we are all more or less interpellated as equal individuals, as potential buyers. This has become even more the case with the breakdown of the styles and comportment that would differentiate classes. A world of CEOs in hoodies means that for the most part we can all walk into stores and be treated the same (unfortunately, exclusions of race and ethnicity still apply). This is the utopian aspect of the market that appeals to liberals and libertarians. In the sphere of production capitalist and worker are differentiated and divided, one commands the other obeys, one buys and the other has only his or her hide to sell. Frédéric Lordon has argued that in contemporary politics the interpellation as consumer negates and marginalizes the worker. As Lordon writes, “The justifications offered for contemporary transformations in employment practices—from longer work hours (‘it allows stores to open on Sundays’) to competition-enhancing deregulation (‘it lowers prices’)—always contrive to catch agents by the joyful affects of consumption, appealing only to the consumer in them.” The split is less between two spheres than it is two ways of looking at the same thing--two different spontaneous ideologies, or, in Lordon's case, two different affective orientations. As a consumer I love low prices and quick delivery but as a worker, or someone in solidarity with workers, the same practices undermine the power of workers. The consumer is the death of the worker, a point that is underscored by people willing to have others die so that they can consume.

Of course it is important not to neglect the fact that work is the primary means people have for surviving, for paying for rent and food, and the demand for work could just be a demand for survival. Even if we factor out the engineered nature of the protests, and how many people are protesting not so much the interruption of work but the interruption of consumption, there does seem to be a remainder that seems to be demanding that people work not out of survival but on principle. Some people seem to be angered that work has stopped not because they need to work in order to collect a paycheck, or even because someone's work would provide them with what they need or desire, but because it disrupts some overarching sense of order and propriety. This is what I would call right workerism. 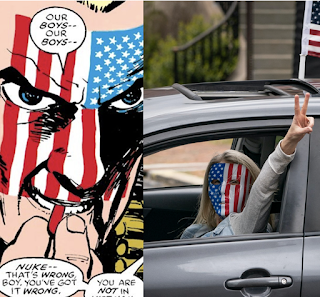 It is possible to find traces of this notion in the history of philosophy. If philosophy begins with Plato it also begins with the idea that work does double duty. It is at once the foundation of the city, an expression of humanity's lack of self sufficiency and the expression its highest ideal, justice as order. Everyone in their place, doing what they are supposed to, and nothing more is justice. It is Hegel, however, that always strikes me as the architect of right workerism. Hegel’s Philosophy of Right places labor at the foundation of both the individual’s self-respect and social recognition, providing the linchpin between the individual and society. What Hegel stresses is not the recognition of the labor of the individual because of the particular job or task in producing particular use values; it is not a matter of recognizing the work of the farmer, baker, or university professor in terms of their particular craft but in terms of the general ideal of work as a norm. Work is a process of education, an education inscribed in the materiality of things and the interconnectedness of social relations:

Practical education through work consists in the self-perpetuating need and habit of being occupied in one way or another, in the limitation of one’s activity to suit both the nature of the material in question and, in particular, the arbitrary will of others, and in a habit, acquired through this discipline, of objective validity and universally applicable skills.

Work sands off the rough edges of particularity, making individuals interchangeable and dependable. It is precisely the universality of need and the interchangeability of functions that is the basis for recognition and respect. To translate this into current values and vernacular, one is worthy of respect not because one provides a valued service or produces a needed commodity, but simply because on has a job. The worker is the antechamber of the citizen: it is only because individuals are made universal and interchangeable in the workplace that they can be treated as such by the state. For Hegel work is not just an economic activity, a condition for the production of goods and services necessary for the material condition of the state, but an ethical one as well. Ethical not in the sense of its rules or norms that determine a sense of right or wrong, but ethical in the sense of an ethos, or ethical life, it is the basis of the constitution of the basis of collective and individual identity. Work is an economic activity as well as an ethical one, and it is the contradiction between those two sides that defines a problem at the heart of the state, which must constantly stitch together what capital tears apart, as increases in efficiency and automation create the unemployed rabble. Hegel argues that the state's attempt to solve this problem explains the tendency towards colonialism, which is an attempt to manage the rabble and the excess of production. 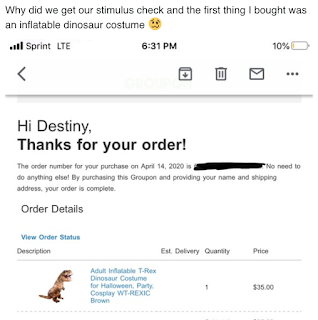 Departing from Hegel we could say the state must continually maintain the connection between the ethical and the economic meaning of work, between work as discipline and work as the production of necessary goods and services repairing what capital itself unravels with the automation of jobs. It is the state that says all jobs are essential. The ruling ideology is one that tells us "we work for a living," presenting an artificial and mediated relation as a natural one, collapsing the more complex fact that we work for an employer who provides a wage that we use to buy the commodities  into a natural fact of life. Which is why any deviation, any separation between work and the satisfaction of needs and desire must be policed and monitored. This is where the entire mythology of the welfare queen enters, as well as its more mundane variant of anger at people spending stimulus checks on inflatable dinosaur costumes and dildos.

This brings us to where we are now. I am not going to make any prediction about the future or what this all means. The connection between work and being worthwhile has been severed, at least temporality, partially, and cheaply, twelve hundred dollars does not leave much in the budget for dinosaur costumes (are they really that cheap? I sort of want one). Despite the dinosaur costumes and dildos, one could also argue that the connection between consumption and pleasure has been severed as well. There is not much shopping going on, and shopping has become more of exercise in fear rather than joy, fear of stores running out, of getting sick, etc., People don't just want the malls to open they want the joys it used to represent. The two pillars of the spontaneous ideology of capitalism, work as a measure of worth and consumption as its reward, have been suspended, broken, at least temporarily. As much as there are people clamoring to repair the rift, to go back to work so they can reward themselves with a nice haircut, this is the kind of opening that makes it possible to reimagine the world, as Kim Stanley Robinson argues. As he writes,

"Schools and borders had closed; the governor of California, like governors elsewhere, had asked residents to begin staying at home. But the change that struck me seemed more abstract and internal. It was a change in the way we were looking at things, and it is still ongoing. The virus is rewriting our imaginations. What felt impossible has become thinkable. We’re getting a different sense of our place in history. We know we’re entering a new world, a new era. We seem to be learning our way into a new structure of feeling."

It is my hope that this new structure of feeling will open up to a new way of living a transformation of values beyond the worth of work and consumption.

Posted by unemployed negativity at 9:01 PM