We Other Monsters: Living in the Interregnum with Citton and Rasmi 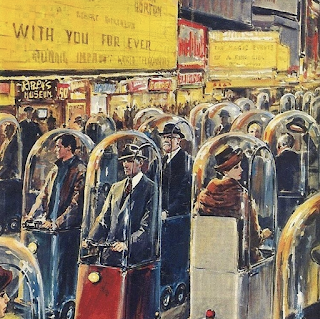 
Yves Citton and Jacopo Rasmi's book Générations Collapsonautes: Naviguer par temps d'effondrements either arrived at the best time or the worst time.  It showed up in my campus mailbox in the week before spring break. Under different circumstances this would be a great time to get a surprise book. However, this year, the week before spring break was also the week that I learned that my campus would be closed after break, and all classes moved online, it was also the beginning of social distancing, and a week in which I did many things, visit friends, go out to eat, practice aikido, for the last time. In other words, I received it as the world began to collapse.

Or did it? That is the strange thing about this moment. We do not yet know what exactly are we living through. For that reason I am glad that I read this book during the last few nervous weeks. Weeks in which I was unsure if I could read anything at all. Citton and Rasmi could not have anticipated Covid-19 and their book was written in a different time, a time that seems so long ago, in which collapse, ecological, social, and economic, was something to speculate rather than something to directly dread. The initial provocation of their book is the proliferation of different narratives and accounts of collapse that appeared in bookstores in recent years. It was the moment of theory rather than practice. Citton and Rasmi's primary question is precisely what the practical importance of this theory was; in other words, how can all of our obsessions with the end of the world help us create a new one.

Following Citton's earlier works on mythocracy, Citton and Rasmi consider collapse as something of a myth, one that reflects and reiterates the predominate themes of original innocence, eventual decadence, and fall. As such there is a version of a collapse that is not at all critical, does not have any real connection to action, or politics. We are already doomed. There is nothing to do but wait.

As Citton and Rasmi argue we have to understand that the apocalypse is already written. Not in the sense that it is already here, but in the sense that we have already read it, seen it, so many times. As they write, "Literature (the same could be said for theater our cinema, of course) is not content to predict the future, to tell us what might happen. It pre-screens this future by making it already familiar to us and by leading us to develop responses and mental habits that predisposes us to our behaviors of tomorrow--which will therefore have already been written by the time it occurs."

Here it might be useful to recall a movie that almost no one saw. Disney's Tomorrowland failed in all of the ways that one would hope a movie based on a theme park ride would. However, if I remember it correctly it had a somewhat interesting premise. Basically, a group of futurists come to the realization that progress is over, that humanity is doomed. They see the future and it is not good. The futurists, denizens of Tomorrowland, decide to warn the rest of us, sending out subliminal messages about the end of the world. These were intended to warn humanity, but instead the apocalypse becomes our culture. We all just accept the end of the world. Tomorrowland is not a great film, not even a good one, but it did at least try to ask the question about our fascination with the end of our world. It just tried to do this while selling us on the retro-refit of a theme park ride.


Or, closer to home, we can think of the way in which response to Covid-19 at least in the US followed the scripts of disaster films, a stockpiling of guns when hand sanitizer would have been more useful. Of course this does not explain the run on toilet paper unless there is some post-apocalyptic movie where that happens. We are so convinced that we know what the end of the world looks like from so many movies, that the real one will invariably surprise us, catch us with our pants down. 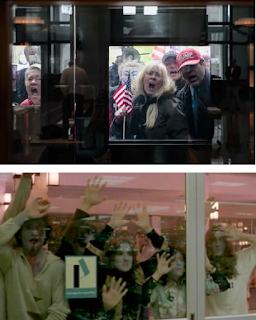 Navigating the time of collapse is a matter of the gaps and intervals, the gap that separates our imagination from reality and our knowledge from our practice. This to me is the most striking part of this book, at least as I read it during these ongoing anxious weeks in which I sometimes wondered if I shouldn't be stockpiling weapons or turning the yard into a garden. Such actions seemed to make more sense than submitting my book orders for the fall semester and doing my taxes. It is hard to know what to do. Should we continue to work in and for a world that seems to be unraveling, but is the only world we know, the world that we imagine ourselves inhabiting, or should we prepare for some other future. It is hard to tell now if in the future we will consider the time we spent in zoom meetings or the time we spend hoarding nonperishable food to be more foolish. These questions are difficult to answer, but Citton and Rasmi argue we need to produce a concept of collapse that makes it possible to act, think, and live in the interval as we live through a kind of interregnum.

This is Citton and Rasmi's critique of much of the literature of collapse, which is far too eschatological far too monolithic in its presentation in a singular collapse. It is often just another version of the fall from innocence. In other words, the story that the west keeps telling about itself. Citton and Rasmi turn to another group of thinkers to navigate this collapse, following Eduardo Viveiros de Castro and Deborah Danowski they look to the way in which not only other world have already ended but also in the way in which there are other worlds existing. There is no end of the world because there is not one world. Moreover the world that most of us live in, the one that is cancelling flights and closing schools, in some sense predicated on a simultaneous exploitation and denial of the existence of other words. As Citton and Rasmi argue, citing Moten and Harney, "the fort is surrounded." The world we made and see, the one we know and image in even as we imagine it collapsing, the settler world, is itself situated in relation to multiple worlds.

We need a new way to think and live in relation to this multiplicity. One that is not predicated on the all or nothing of the apocalyptic imaginary, that only sees "normal life" or its destruction. Or, to paraphrase Deleuze, we need a new way to believe in these worlds. On this point Citton and Rasmi turn to Spinoza.

"In light of the current ecological perspective, we could thus reverse the traditional sense of the Spinozist equation Deus sive natura (God or Nature). Where traditionally the celebrated formula is a strategy for the elimination of God in order to concentrate our intelligence on the rational explication of the material world, which of course played a pivotal role in the wonderful development of scientific knowledge invented by modernity. In the age of the Anthropocene one could ask if the hour has not come to to complete this first reading by a corrective second reading, which would recognize nature with the status formerly granted to God by the monotheistic religions."
As Citton and Rasmi go on to state while the former made it possible to know the world the latter restores epistemological humility and an awareness of our dependence on the various worlds we live in relation to. As they write, "Human beings and their culture appear in a vast field of nature which, in Spinoza, can no longer be constituted as an exterior subordinated to our will but more as a milieu, in the sense of a self caused totality, whose ecosystem causalities must be respected before any individualized consideration."

We are in an interregnum. Our old ways of comporting ourselves, imagining our future, and inhabiting it, are coming undone. We are living through a collapse with its own uneven distribution and temporality. Between nostalgia for what once was and a fear of the end of the world there is still the possibility of creating new worlds. Or as Citton and Rasmi argue, "There is no alternative to the creation of alternatives." Thus, to answer the question posed above, should we continue with our lives in collapsing world or prepare for the apocalypse maybe we should do things that can transform both, build solidarity that is geared for struggle and survival.

This is not a thorough review, or the best conclusion, but blogging was a questionable use of time even when society wasn't collapsing.
Posted by unemployed negativity at 9:49 PM