The Procession of Monstrosities: On the Ghoulish Turn of Contemporary Capitalism 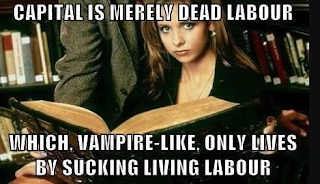 What Follows is heavily indebted to a conversation about zombies and vampires at Red May Seattle in 2017, and is in some sense written as a reflection on the powers of collective thinking (in other words, I am not entirely sure who said what about zombies versus vampires)

It is a great line, one that gave birth to not only memes but also entire subfield dedicated to the analysis of monsters in capital. What follows is a contribution to that study.

What makes capitalism, or a specific stage of capitalism specifically vampiric? Here we might borrow Marx's line about the anatomy of the human containing the key of the anatomy of the ape; in other words, we can learn more about the vampire stage of capital by examining the figure of the vampire that coalesced after Marx wrote Capital. Beginning with Bram Stoker's Dracula, written thirty years after the publication of Capital, a particular figure of the vampire begins to take shape. He not only feeds at night, but also effects a dignified, even aristocratic demeanor when he is not feeding. The vampire does not just disguise himself as human, but as one of mankind's natural superiors. He is charming, polite, and seductive.

Turning from popular mythology to philosophy we can see what this demeanor looks like in the field of philosophy. The classic defense of capitalism from Adam Smith and John Locke to John Rawls has always argued that the inequality and exploitation of capital is justified by the way in which it furthers overall social progress. This idea of overall social improvement, a tide of blood that lifts all boats, is the charming demeanor and fashionable cape that the vampire wears in his castle. As Locke writes,

There cannot be a clearer demonstration of anything, than several nations of the Americans are of this, who are rich in land, and poor in all of the comforts of life: whom nature having furnished as liberally as any other people, with the materials of plenty, i.e. a fruitful soil, apt to produce in abundance what might serve for food, raiment, and delight; yet for want of improving it by labor, have not one hundredth part of the conveniences we enjoy: and a king of a large and fruitful territory there feeds, lodges, and is clad worse than a day laborer in England.

This focus on the overall social improvement that defines the vampire as a monster of liberal capitalism. In contrast to this the zombie is a creature of neoliberal capitalism. Zombies, at least as they have been reimagined by George Romero, do not wait until night to attack. They hunt out in the open, milling about, festering wounds and all. There is nothing charming or seductive about them. Zombies do not conceal the monstrous nature of their appetites

Here I have to give credit to Eva Cherniavsky, Catherine Liu, and Asad Haider as my fellow panelists on that zombie capitalism panel, as well as to Philip Wohlstetter and everyone from Red May for organizing. I cannot honestly remember who said what, but the figure of zombie capitalism that emerged from that discussion was one that no longer relied on veneer of progress or respectability. It is a capital that naturalizes itself rather than justifies itself. Greed is no longer tethered to a general view of progress that would justify it, it just is a brutal fact of life. It is useful to turn to the zombie film again, which, at least since Romero, are less interested in supernatural explanation for zombies than quasi-natural ones, they might be the product of a virus or some other anomaly, but their behavior is defined by an almost excess of nature. They hunt and feed. They are nature stripped of any illusion or alibi. This is the view of capital that emerged as neoliberal thinkers have increasingly turned to evolution and evolutionary psychology to argue that it is competition all the way down. Brutal competition no longer needed to wear a cloak of progress, it is all there is, continuing even beyond life itself. (It might be useful to think of the increasingly right turn of the zombie film, from Romero's satires of the shopping mall and military to the Walking Dead's valorization of a survival aesthetic in which every community of well meaning survivors turns out to be just another group of cannibals).

Following this analysis I would like to argue that we are now living through a stage that is best described by the ghoul. Here I can make no recourse to popular culture, even if Carpenter's They Live referred to the alien beings as ghouls. Carpenter's ghouls acted more like space vampires, concealing their visage and their message beneath a facade of ideology and promises. I can, however, turn to language, to the adjective ghoulish, "morbidly interested in death and disaster." This ghoulishness has shown up in multiple calls for people to sacrifice themselves, or be sacrificed for the benefit of the economy.


The ghoul is in some sense the inversion of the vampire. Whereas the vampire claimed that the economy, with its apparent brutality and inequality ultimately served humanity, furthering progress, the ghoul claims the opposite, invocations of grandchildren notwithstanding, that we serve the economy, that our lives must be sacrificed for it to live on. In truth the relation is perhaps more of a dialectic of monsters than a simple inversion. Just as the zombie negates the vampire, replacing its justifications with naturalization, the ghoul negates and preserves the zombie, such claims for sacrifice, for death, only make sense against the backdrop of zombie capitalism's claim that there is no alternative, that this world is the only possible world, a world that reflects our natural drives.

As much as the ghoul represents an ideological shift the transition from vampire to zombie and ghoul can be indexed against the changing nature of capitalist accumulation. The vampire could make promises of social progress during a period of expansion. The zombie is the moment this period ebbs, and follows a tendency of cannabalistic privatization, consuming itself to find profits. The ghouls is all that is left in the age of surplus populations and stagnation. It is too soon to say where this ghoulish stage will end up, but one can only hope that after the vampire's seduction and the zombies naturalization the ghoul will finally reveal the brutality at the heart of the economic system.
Update 1/5/21: Omicron Man
What I initially presented as a dialectic, in which the zombie was a negation of the vampire, and the ghoul the negation of the negation, seems now, in the winter of year two of the pandemic, to have stalled and turned back on itself. The insistence that businesses will remain open, schools will be in person, and there will be no new restrictions, and, most of all, no new forms of relief, remains firm despite escalating cases. However, the ghoulish invocations of sacrifice of the necessity of death seems to have subsided. This is in part because, it seems at this point that the omicron variant is less deadly. This maybe true, and I hope it is, but as many have pointed out, a more contagious and less virulent virus still leads to hospital overloads and maybe even as many deaths once less unchecked if you do the math. I do not really want to get into virology or epidemiology here. I have no business doing so.
Instead I would like to suggest that seeming eclipse of the ghoul or the return of the zombie says something about capitalism as a form of power. Marx referred to the "mute compulsion" of economic relations. The economy, by definition, does not need ideological justification; it does not need the ghoulish supplement of pundits telling people that they should be willing to die for it. All it needs is the fact that people need to eat, need to pay rent, need to sell their labor power in order to survive. One could argue, as Zizek and others have, that moments where capitalism announces itself, openly declares that people need to be willing to get sick and die for it to work, are moments of crisis for it. That its true function, its best functioning, are when it can quietly assert that there is no alternative. It seems to me that is what we are living through now. Biden presented his entire campaign as a kind of return to normal, as a campaign against the excesses of the Trump years, perhaps we can now see what that return to normal is, a zombie like continuation of the old habits and ways no matter what the cost. In other words, the best ghouls are quiet about being ghouls.
Posted by unemployed negativity at 1:35 PM

That is a very nice way of putting it--very succinct.