The Return of Lucien Sève: On the Anthropological Turn of Contemporary Marxism 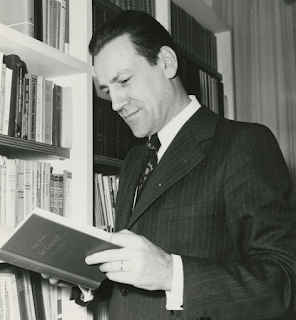 The young Lucien Sève looking a lot like Jon Hamm


In graduate school I only knew one thing about Lucien Sève and I do not even think I had the facts straight. I knew him only as Althusser's interlocutor within the PCF, and I think that I imagined him as some kind of party apparatchik. I only corrected this image very lately, after reading Yves Schwartz as well as Isabell Garo and André Tosel. What is striking to me about Sève's work, at least as much as I have read, is how much of it anticipates and intersects with the anthropological turn in contemporary Marxism, in the work of Balibar and Virno.


Sève's Marxism et Theorie de la Personalite takes the seemingly unlikely position of arriving at a Marxist, which is to say, a materialist concept of human personality and biography. It does this first by refuting the very possibility of psychology. This is one way to read the famous Sixth Thesis on Feuerbach in which Marx writes, "the human essence is no abstraction inherent in each single individual.In its reality it is the ensemble of the social relations." This effectively uncovers the untenable proposition at the heart of psychology that of the individual considered in general. To be both individual and generalizable is a kind of oxymoron. As Sève writes, "This logical monstrosity, the abstract "general individual," is the skeleton in the cupboard of the psychology of personality."

That Marx offers a thorough, albeit indirect, critique of the basis of psychology is not surprising. After all it is individualistic and ahistorical, in a word, bourgeois. What is perhaps more surprising is that Sève argues that Marx offers the basis for a historical and materialist concept of human individuality. This is to be found not in the work of the young Marx, in the writings on species being, but in the attempt to produce an understanding of the social relations in Capital. In some sense this means reading Marx against the lines, every structure of the economy, every economic relation, must be understood to have as its obverse its effect on personality. As Sève writes,

"This productive activity of men, being a social activity, is entirely governed by the objective dialectic of social relations-and in this sense, which is that of economic theory, men appear only as support for economic categories.; but on the other hand, being an activity of men, it also immediately constitutes a fundamental aspect of their individual life process. These are two sides of the same reality."

As Sève writes latter in the book, and I have remarked on elsewhere, the two sides of labor, abstract and concrete, define not just the particular nature of labor in capitalism, but the particular way that labor is lived, split between its concrete specificity and its abstract productivity. Working, selling one's labor, is caught between these two aspects, between the demands and details of a specific job, a specific task, and the more abstract, but no less lived, imperative to meet economic norms of productivity. The dual characteristic of labor is the point of intersection between an individual life, caught up in the concrete specificity of a particular task or job, and the general social norms of labor.

Sève thus approaches in a different way what could be called the intimacy of the mode of production. The way in which in order for capital, for any economy, to function it must be intimately lived rather than just imposed from the outside. In other words, those of Deleuze and Guattari, "desire is part of the infrastructure." However, unlike Deleuze and Guattari (and Lordon for that matter, not to mention the entire range of Freudo-Marxists from Reich to Zizek) does not arrive at this through some kind of theoretical supplement, Spinoza, Freud, or Lacan, but through a reading of Marx.

Of course many might be skeptical that Marx can provide the basis of such a theory. However, Sève argues in Penser avec Marx aujourd'hui Tome II: L'homme? that Marx's thought is as much a revolution in anthropology as it is one of philosophy or history. This revolution is in part a refusal to split individual from history, psychology from society, which are two different ways of looking at the same thing. Beyond this assertion of the transindividual nature of subjectivity and individuality Marx's revolution in anthropology is also to be found in the way that Marx understands the intersection of living and dead labor. This is not just another way of thinking the world of subjects and objects, but of also understand that the human world is made up of desubjectified forms of psychic activity, all of those talking commodities and dancing tables, and we are ourselves are made up of historically sedimented practices and thoughts, all of that weight of dead traditions.

I do not have the space to go into a longer discussion here, but what is striking is the way that Sève in his own way has come to a position that could be broadly described as a post-humanist anthropology, a way of understanding the thoroughly social and historical, which is to say artificial and material nature of our existence (as one finds in Virno and Balibar). At the same time, and in a different direction, Sève also underscores the need to connect the concepts we make sense of the world with the way that they are lived and shape our individual lives (what could be called a finite Marxism).

Posted by unemployed negativity at 1:31 PM