Marx's Finitude: On Hägglund and Tosel 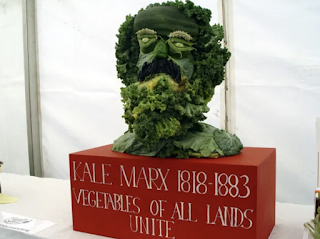 One of the many merits Martin Hägglund's This Life: Secular Faith and Spiritual Freedom is that it makes a connection between finitude, our mortality, and not only Marxist but the broader product of democratic socialism (Hägglund's democratic socialism often sounds a lot like communism, but life is too short to mince words). For far too long, in philosophical circles, finitude, the fundamental fact that we are going to die, was see as the exclusive purview of Heidegger with all of its corollaries of authenticity, individuality, and seizing one's historical destiny.
Hägglund's examines finitude from two different angles. First, he argues, that our existence has meaning precisely because it is finite. That all of the things that concern us, our projects and endeavors, and all of the things that give us joy, our loves and passions, do so precisely because they are finite, limited, and could be ripped from us at any moment by the contingencies of our finite lives. They are necessarily sustained by a kind of secular faith. As Hägglund writes,

"Secular faith is the form of faith that we all sustain in caring for someone or something that is vulnerable to loss. We all care--for ourselves, for others, for the world in which we find ourselves--and care is inseparable from the risk of loss."

It is worth noting in a kind of cultural synchronicity that this is not too far from the position that the television show The Good Place ended up with in its finale. It turns out the "good place," a kind of heaven where you can do anything, enjoy anything, experience anything forever becomes its own kind of "bad place." Even the good place, heaven, needs to end to be meaningful and enjoyable, which is why the show ends with adding death to the afterlife.


While I basically agree with this first part, I have always thought the tendency, shared by religions and philosophers, to argue against the pleasures and commitments of this world because they are ephemeral and fleeting to be fundamentally wrong and misguided.

It is not this first part of Hägglund's argument that is my concern here as much as I might agree, but  the second one. In the second half of the book Hägglund make a connection between our finite lives and a critique of capitalism. If we have only one life, and so does everyone else, then it becomes of paramount how and what we do with that time. In other words, and summing it up rather crudely, if every person, the people we interact with on a daily basis as well as those we never see but make our lives possible, is trying to do the best they can with their one and only life then that should change how we interact with them. Hägglund is not making an ethical point here, but it is worth reflecting that this simple and somewhat uncontroversial fact is overlooked in our daily conscious. We go through life treating all sorts of people, all sorts of lives, as if they are simply ready-to-hand, there to serve us.

Hägglund uses this focus on finite life to reexamine not the quotidian ethics of capitalism, but its structural priorities. Under capitalism, our time, our lives, are lived under the compulsion to sell our wage labor, to give up our time, and to do so under conditions which are themselves outside or our control, subordinated to the valorization of surplus value. As Hägglund writes,

"Under capitalism we are all in practice committed to a purpose in which we cannot recognize ourselves which inevitably leads to alienated forms of social life. The actual needs and abilities we have are secondary; what matters first of all is whether capitalists can profit from our needs and exploit our abilities in wage labor. The market decides which abilities we should harness, while our needs are transformed in view of what we can buy. Many of the abilities that we could develop--if we had time to lead our lives--are discarded because they are not deemed to be profitable, and many needs are engineered to make us purchase more commodities rather than provide satisfaction."

Hägglund in some sense draws together the early Marx, the writings on alienation, with the late Marx, with the following passage from Capital Volume III:

"In fact, the realm of freedom actually begins only where labour which is determined by necessity and mundane considerations ceases; thus in the very nature of things it lies beyond the sphere of actual material production. Just as the savage must wrestle with Nature to satisfy his wants, to maintain and reproduce life, so must civilised man, and he must do so in all social formations and under all possible modes of production. With his development this realm of physical necessity expands as a result of his wants; but, at the same time, the forces of production which satisfy these wants also increase. Freedom in this field can only consist in socialised man, the associated producers, rationally regulating their interchange with Nature, bringing it under their common control, instead of being ruled by it as by the blind forces of Nature; and achieving this with the least expenditure of energy and under conditions most favourable to, and worthy of, their human nature. But it nonetheless still remains a realm of necessity. Beyond it begins that development of human energy which is an end in itself, the true realm of freedom, which, however, can blossom forth only with this realm of necessity as its basis. The shortening of the working-day is its basic prerequisite."

Alienation is not some loss of some metaphysical essence, some species being, but a deprivation of our finite and indefinite time on this earth. We are are alienated from our existence, as finite and uncertain as it is, not from our essence. Putting time at the center of the critique of capital not only distinguishes Marx from any kind of metaphysics of labor, but also from any focus on distribution. It is not a matter of wages, of wealth, of inequality, but of freedom, or our ability to individually and collectively determine our existence. Hägglund calls this "democratic socialism" but is is a far cry from what goes by that now in the US, which is more or less an attempt to use democracy to restore some semblance of redistribution. There is no electoral road to this democratic socialism, in part because political democracy is predicated on a denial of democratically determining the conditions of our existence. "Under capitalism, we cannot actually negotiate the fundamental questions of what we collectively value, since the purpose of our economy is beyond the power of democratic deliberation. We can make decisions regarding of our social wealth, but the final purpose of the production of our wealth (profit) is already decided."

Hägglund's strength is in reorienting a critique of capital from a fundamental experience, that of finitude, of limited time on earth. 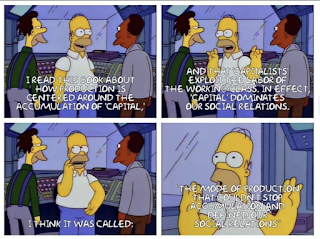 Nearly twenty five years ago André Tosel argued for what he called a communism of finitude in Études sur Marx (et Engels). For Tosel finitude is not exclusively or even primarily our finite time, the uncertain nature of our life, but is framed against a criticism of the infinite capacity of rationality. Tosel sees this rationalist ideal in a Marxism which sees capital, the capitalist relations of production, such as the valorization of surplus value as necessarily distorting the human (and technological) capacity of the forces of production. In some some sense Tosel criticizes an accelerationist reading avant la lettre. On that reading the critical project is liberating the forces of production from the capitalist relations of production. The idea being that once liberated from capitalist objectives and constraints these forces would be fundamentally unlimited, infinite, capable of delivering the "full luxury communism" we have been promised. It is just a matter of liberating content from form. In place of this sterile opposition of content and form, one predicated on the idea that there is something like work, or productive activity outside of its social relations, Tosel poses a different dialectic, what he refers to as a double mediation,  a mediation of relations by forces and forces by relations. In other words, there is no pure productivity capacity outside of social relations just as there are no social relations outside of their material conditions. Our put differently, Praxis is always poeisis and poesis is always practice.

This double determination has a doubled edge effect on liberation. On the one hand there is no once and final liberation of the productive forces from capital, but an ongoing process of transforming social relations by technology and technology by social relations. Communism is an ongoing project of transforming social relations and technical relations to liberate us and our time. On the other hand, production, or even wage labor, are not a transcendent starting point for Marxist politics, but a product of a particular conjuncture, different ages might enter production differently, at different points. As Tosel writes, “The perspective of a double mediation of production by action and action by production implies that production can only be understood as a point of departure imposed by the historical situation.” Here Tosel anticipates not so much accelerationism, but various arguments that have made the case that we need to turn to other contradictions then the exploitation of labor to understand contemporary capitalism. Thus there are those that argue that the contemporary contradiction is not the worker, but unemployment, or circulation, or social reproduction. A finite communism must begin from the existing tensions and contradictions around life and capital, and it does not definitively put these to an end but only transforms and works towards liberation. 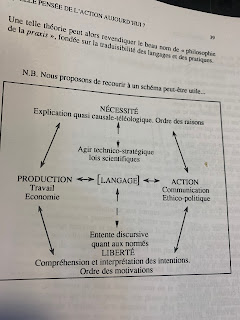 Tosel's schema of this double determination

Tosel continued a long examination of finitude and the infinite, an examination that passes through Spinoza and modern neoliberalism.  In his examination religion, the afterlife and god, is only one figure of the infinite. Its modern versions are to be found in rationality, or in the infinite powers of the market itself. These have as their corollary different forms of finitude, ways  grasping or understanding our limitations. The modern dominant ideology could be described as one that celebrates the infinite power of the market, it can solve climate change or get us all to Mars, while simultaneously bemoaning the limited nature of our own individual and collective capacities. We are told again and again that any attempt to change the world, to collectively and democratically order it to serve our needs, will end with defeat or another gulag.

While Hägglund focuses on religion Tosel reminds us that there is more than one way to be religious,  to place the infinite above and beyond the finite, or to fetishize an infinite power. At the same time Hägglund offers a way to ground our criticism of capital in what is most immediate to us, our time. At the very least a communism of finitude (or democratic socialism) seems necessary not only to get us our short lives back from a system which will squander them for its profit, but to also address the ultimate condition of our finitude, this small planet that we live on with its limitations and constraints. A finite communism for a mortal beings on a limited planet.
Posted by unemployed negativity at 6:01 PM