Be Fooled By the Rocks that I Got: On Uncut Gems and Contemporary Subjectivity 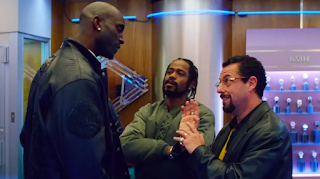 The question of the relation between the individual psyche and social relations is a perennial question. This is largely due to the fact that we are so ill-prepared to understand it. The fields of psychology and sociology each claim one side of the relation as their domain pretty much ensuring that the question will not be properly posed, let alone answered. With the division of labor in academia is left to its own devices we have the world of film (and television) which gives us figures that are at once singular, reflecting their own neurosis, and general, expressing in their own way the cultural moment.


This seems to be the best way to approach Uncut Gems, a film which is as much about its cultural moment as it is about Adam Sandler's performance as Howard Ratner. The film is set in 2012, which makes the cultural moment somewhat generic: it is far enough from the 2008 financial crisis that capital has been restored to some version of normal and not yet at the moment of the 2016 election when that normal would be severely undermined. It is in the interregnum of those two crises that something like "normal" life plays out.

Normal life as a pause between crises also describes the film of the main character, Howard Ratner who runs a small jewelry store in the diamond district. His speciality is "bling" the ostentatious and over the top display of wealth that appeals to those nouveau riche who do not know that wealth today is best hidden behind a t-shirt and a hoodie. Ratner is also a compulsive gambler, and maintains an apartment in the city where his mistress (and employee) lives. It is possible to compare Howard to a kind of modern Don Draper, or some other sociopath of modern television, living a double life. However, Draper, Walter White, or the the Philips, were able to keep the two lives apart. Howard cannot do this. Goons from his bookie show up while he is watching his daughters play. His loan shark is at the same Passover Seder because it is his brother in law. His attempts to keep his life private, to maintain a division between reality and appearance fail spectacularly. This is underscored in a scene where he stops by his apartment late in the film. His son who is with him needs to use the bathroom. Howard fears that his mistress might be there, so he asks his neighbors (including John Amos star of Good Times, not be be confused with the Safdie borthers' film Good Time, in one of the oddest call backs in movie history) if his son can use the bathroom. His awkward attempt fails as his son learns about the mistress anyway. Ratner's fate is one of a kind of post-private subjectivity. It is hard to live a double life without the institutional and material supports that make such things possible. His secrets, his mistress, his money, etc., are as legible as if he left them all open as browser tabs.

This inability to keep a division between the two lives, that of a Long Island family man and that of a partying-wheeling-dealing Manhattanite, is also reflected in one of the other characteristics of Howard, his ability to shift gears dramatically, and violently. At the beginning of the film his marriage is falling apart, his wife knows of his affair but they are staying together through Passover for the family. Later, when he believes that his mistress is cheating on him he kicks her out of the apartment he pays for, and makes a pathetic attempt to get back together with his wife. In the scene, partially included in the trailer above, he asks her to look in his eyes in order to assess his sincerity. The look he gives her is so dead, so empty, that I almost believe Sandler should have received an Oscar nomination. More to the point there is something striking in the way Howard not only constantly shifts his loyalties from wife to mistress back to wife to mistress again, but that he does so with such intense affect. One minute he is screaming at his mistress, the next he is plaintively sobbing in front of her. Rage and pathetic sadness are all that remains of the masculine vacillation of affects. Howard vacillates intensely from rage to self-pity, punctuated occasionally of moments when he believes he is winning and in that case he acts with a kind of bravado. What is just as striking is Howard's tendency to react and act without history or consistency. If he is angry then that is all he is in that moment, with no thought to what comes next or afterwards. He lives in a perpetual present that has no thought to future or past precisely because it is so intensely felt.

One could come up with all sorts of actual analogs of this temporality of a perpetual and intense present from financial capital to the news cycle. Given its affective dimension, however, I am tempted to argue that it most closely resembles the world of social media, which moves from outrage to outrage with no thought or remnant of what came before. To paraphrase a line from Francis Ford Coppola, "Uncut Gems is not about social media. Uncut Gems is social media."

All of these characteristics the breakdown of private and public, of inner and outer, and the reduction of temporality to an intense present, are reflected in the film's interlinking narrative of gambling and the con. The film begins with, and almost opens with, the uncut gem of its title, a black opal, that initially attracts Howard's attention because he is watching a History channel special about the Beta Isreal people of Ethiopia. He then shows it to Kevin Garnett, or KG, the Celtics player, playing himself. KG feels an immediate attachment to it, and basically rents it as a good luck charm. KG's rental, and Howard's attempt to turn it into a sale, defines much of the plot of the film. The gem is almost a Macguffin playing a Macguffin. It is an object whose value is almost entirely determined by how it is valued and who values it at the moment. This is not to say that this act of valuing is not work, there is the work of the assessment, the pitch, and the sale. That this work is far from the work of actually mining and extracting gems is one of the thing that the film points out through its opening scene, that of a bloody miner emerging from the earth. It takes a lot of blood and suffering to create a world of objects defined only through the relations and status, championship rings, name brand jewelry.