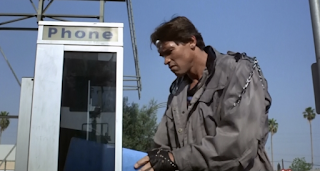 I give blood regularly, platelets actually. I started giving blood in high school when it could get you out of class. Sometime ago I was convinced to start giving platelets. There is a tradeoff to this, you recover more quickly from giving platelets but it takes nearly three hours when everything is said and done. Oh, and once you give platelets the red cross will hunt you down for the rest of your life asking you to give again and again. The big plus is that you get to watch a movie.

I have started a practice where I watch a movie that I missed when it was in theaters. I occasionally pick something that I think might be good, I watched The Last Black Man in San Francisco this way, but usually I go for some failed blockbuster. The room is noisy and there is slight discomfort so I go for maximum distraction. I call it blood bag theater.

Today I watched Terminator: Dark Fate. I hold the Terminator and Alien franchises in particular contempt. I love the first one of each, admit that there is a reason why the second is often discussed as a good sequel, but after that everything goes downhill fast.  It think that this is in part due to the relative simplicity of the first two films; they did not involve world building but hinged on a simple concept, killer robot killer alien, augmented by a pastiche of visual references and allusions. As many people have noted Alien is basically a haunted house in space and Terminator is itself a kind of cyborg of the slasher, science fiction, and action genres. The latter films have either tried to build a needlessly elaborate mythology, the aliens films, or ended up trying to travel back in time to reboot themselves, Terminator:Genysis 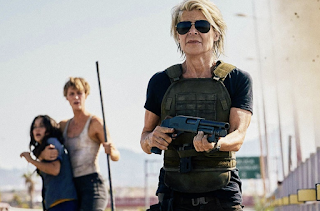 This brings me to Terminator: Dark Fate. After a quick palate cleansing opening that erases the last three films, the film begins as we would expect it to: two figures materialize in Mexico City, one a killing machine, the other also something of a killing machine, but a good one. The line "come with me if you want to live" is even uttered. Sequel as remake. It turns out that this has nothing to do with Skynet. Skynet was destroyed and judgment day prevented, but years later a different A.I., known as legion, one built for cybersecurity comes up with the same idea, kill all the humans. I would say that spoilers follow, but you know what happens next: there is a resistance leader that leads humanity against the machines and sooner or later the machines travel back in time to stop this resistance.

Of course the movie's big claim to fame is the return of Linda Hamilton as Sarah Connor. It is with respect to her story that the film offers its own theory of the sequel. Sarah has spent the years since we last saw her hunting Terminators. She gets a text with the coordinates of each new time travel and shows up like a heavily armed uber driver ready to kill terminators. It turns out that a surviving T-800 played by Arnold has been sending her these texts in order to give her a sense of purpose and meaning. This is the first film that I can think of where the characters are themselves living through a sequel, a repetition of the original movie. Everything is a an attempt to recapture that feeling of the original.

The original Terminator was the first film I watched on our very own VCR. I remember buying the machine, a heavily discounted floor model with my mother and picking out the first batch of cassettes to rent. I mention this because it is striking just how much has changed in our world since the first movie came out. The first movie came out in a world of pay phones and walkmans. What is striking about watching the first film now is how it manages to extract so much malevolence from such seemingly simple technology. An answering machine causes an important phone call to be missed, a walkman makes it possible not to hear an intruder. In the first film technology seems to be against us already, as the crude machines of the twentieth century isolate us and make us vulnerable to the machines of the twenty-first. The recent film tries to update this, there are a few lines about cellphones being tracking devices, an evil terminator scans surveillance cameras, and even uses a drone (but even drones feel so five years ago).

We could map three histories of technology onto these films. There is the history of actually existing technological devices from landlines to cellphones, from helicopters to drones, the world familiar to us that makes up the backdrop of the world of the film. Second, there is the history of special effects technology. As David Graeber argues the movies are where one goes if one wants to find a linear progress of technological development, as every film improves on the last, and every reboot can do things that make the old films look old and out of date. We were perhaps promised flying cars but what we get is better and better renditions of flying cars. The Terminator films are known for their part in the history of special effects, as the second one was a huge leap in digital imaging. The liquid metal look of the T-1000 was as much a breakthrough in special effects technology as it is terminator technology. This digital imagining makes possible a third history, that of the film's projected future as the stiff model robots give way to digital machines that fly and flow through space as beings of pure pixels. What is striking then in terms of the most recent film is how much this third timeline lag s behind the first. The transformation from landlines to the outsourced surveillance of cellphones seems more frightening than the transformation from T-800 to the Rev 9 of Dark Fate. The fears of the robot revolution pale in comparison of the anxieties of a society of surveillance. What are knife hands and a cyborg clone compared to the ability to track everyone everywhere. When your science fiction franchise can no longer keep track with reality it is time to hang up the franchise.

Posted by unemployed negativity at 8:44 PM

Email ThisBlogThis!Share to TwitterShare to FacebookShare to Pinterest
Labels: Graeber, Me, Movies