Capital (The Book and the Totality): On Jameson’s Representing Capital 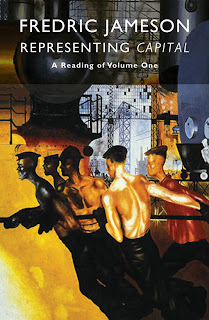 It is impossible not to compare Representing Capital: A Reading of Volume One with last year’s The Hegel Variations: in each case it is a rather succinct reflection, a  brief examination of one of the books that is a pillar of Jameson's thought. This book too has a pedagogical quality, which is not to say that it is pedantic at all, just that it is easy to imagine the book as stemming from a seminar. Like the previous book it offers reflections on themes central to Jameson’s work, such as dialectic and history, as well as some engagements with the broader intellectual horizon, including some surprising remarks on Heidegger’s critique of technology.

Jameson’s book is somewhat paradoxical. It is attentive to the spirit and letter of Marx’s argument: reflecting on the well-known concepts and categories, such as use value and primitive accumulation, as well as the neglected passages, the chapter on the Working Day and the section on Senior’s Last Hour are singled out for interesting reflection. (There is something almost comical of seeing Senior’s name, initially just a figure for Marx’s satirical barbs, placed alongside Hegel and Marx in a discussion of temporality) Despite this focus on the entire work, its logical and representative structure, it is not a reading in the strong sense of the word, a new interpretation of the entirety of Capital, more of a series of reflections. These are largely grouped around a few central themes, two of which I will focus on here.

The first of these is separation, which was already announced by Jameson as a central concern in A Singular Modernity. In that book Jameson posited separation as a central trope of Marx’s (and Marxist) thought, but one that had never been systematically examined. Representing Capital takes up this challenge, making separation one of its organizing principles. Separation is initially, and primarily, the separation of the worker from the means of production. However, as is the case with Marx, at least on Jameson’s reading, every initial contradiction is not so much overcome or sublated, as complicated by what comes next. This is true of that initial contradiction between use value and exchange value, or quality and quantity, which returns again and again in concrete and abstract labor, and every place where the singularity of the laboring body confronts universality and abstraction. It is also true of separation, which returns in unemployment, in immiseration.

Jameson makes unemployment, the reserve army of the unemployed, central for reasons that are both conjunctural and theoretically. Conjuncturally, because this is some sense a reading of Capital produced by the current crisis, by the prevailing realization that unemployment, and with it poverty, is a necessary product of capital, one that is increasingly hard for it to internalize. Which is not to say that the unemployed can simply return to the land, or strike out for new lands: unemployment is not the outside of capital, of the capitalist mode of production, but is its internal condition (something that is becoming increasingly clear in this age of unemployment and austerity).This then is the second reason for Jameson’s focus, unemployment underscores the unity of opposites that defines Marx’s dialectic, the necessity of thinking together in understanding capitalism both massive productivity and massive poverty.

This particular gesture moves in two directions at once. First, it removes Marx’s thought from any nostalgia, any desire to return to a time prior to technology and machines. Doing so would forget the positive aspect of capitalism, its productivity and revolutionary potential. Second, and more importantly, it redefines the dialectic, which is less and less about some formula of thesis-antithesis-synthesis, or even something substantialized into “contradiction” or “the negative,” than it is about a reflexive and differential mode of thinking, a kind of “dialectical immanence.” (This redefinition of the dialectic is actually the thing that unifies the latest three works of Jameson, The Hegel Variations, Valences of the Dialectic, and Representing Capital, but a more thorough discussion requires more time). Positive and negative, singular and universal, must then be seen as both identical and different in an irresolvable way. This can perhaps be illustrated more than explained. Here is the long passage on alienation:

“We found that in all reading here, indeed, is away with the concept of alienation—in its most Hegelian form, as the way in which I alienate my own production by producing it as separate from myself in the first place, so that it comes before me as a properly alien object in force—is very much built into the very structure of Capital, where as we have seen the working class forges its own “golden chains,” lends capital its own wages in advance, and advances the accumulation of surplus value by its own surplus labor, not even omitting to courage invention and introduction of new technology as capitalism’s response to its own resistance. Here we find the very form and action of alienation with a vengeance, only with the philosophical label omitted; and in this sense is remarkable to see this operation less as the abolition of philosophy in as its fulfillment in a new way. This is what Marx meant when, in his famous slogan, he recommended that we rise from the abstract to the concrete. Traditional philosophy was indeed the conquest of the abstract as such, the emergence of universal concepts from the “blooming buzzing confusion” of pensée sauvage, the disentanglement of the Platonic ideas from the material incarnation at the moment of the invention of philosophy in ancient Greece [Jameson’s reference is to paragraph 33 of the Phenomenology of Spirit, which he refers to often]. The Marxian concrete is not then some third term or Hegelian “returning to back into itself” of the abstract, but rather the supersession of those disciplinary differentiations that characterize modernity as such, and the discovery of totality as universal interrelationship: in this instance the discovery of the very abstraction called alienation is itself a sign and symptom of the dynamic civilian nation at work reality itself and in the totalization of society by capitalism as an emergent system.”

Jameson’s invocation of alienation, as an unnamed but central category of Capital, while structurally similar to Althusser’s reading of “structural causality,” would seem to be directly aimed against it. However, Jameson takes up one of Althusser’s central provocations (often unexamined) of the specific temporality of capital. As Jameson argues this temporality must be split between the wage relation (C-M-C), which begins anew at the end of every week or workday, an eternal present, and the accumulation of value and knowledge by capital itself (M-C-M’), most notably in machines. There is thus an accumulation of history but one which is effaced, or, as Jameson says, extinguished, in the eternal present of capitalism, in the interchangability of workdays.

Extinguished, or extinguishing, (auslöchen) is another central term for Jameson’s reading, as Marx’s section on commodity fetishism argued, capitalism extinguishes, or obscures, labor in the commodity. It also obscures its own historical conditions, and history itself. To cite Marx, "The taste of the porridge does not tell us who grew the oats..." (It is worth noting much much of contemporary culture, at least in the US, is organized in overcoming this, farmer's markets, etsy, even social networking, are all ideological responses to this separation). The interest in this extinguishing of history can perhaps be read as an explanation of Jameson’s most often cited remark, the one about how it is easier to imagine the end of the world than the end of capitalism. History is effaced not just in the commodity but also in the eternal present of the precarious employment situation, where all those years worked do not add up, or they do, but in the form of an increasingly alien capital, in machinery and the wealth of the company. "Separation" and " the extinguished" are ultimately terms that make it possible to make sense of both Capital and capitalism.

There is much more to say about this book, which is simultaneously provocative and frustrating (How could it not be?), but this is my initial response.
Posted by unemployed negativity at 5:27 PM

Thanks for the review; I've just ordered the book and appreciate the clarity.

Thanks for this - I do like Jameson's remark that Capital is not a political, an economic, a political-economic or a philosophic book, but one written with an eye to the 'supersession of those disciplinary differentiations that characterize modernity as such, and the discovery of totality as universal interrelationship.' This practice of 'dialectical immanence' still seems very exciting to me - it's a precondition of everything that has been genuinely counter-capitalist, whether we're talking about politics, culture or whatever. But I wonder if Jameson's insistence that Capital isn't a political book really takes on board the radical implication of that dialectical immanence. The fact that it offers no program of reform, no post-capitalist constitution or blueprint etc is the difference that defines it as a new kind of political book, one that supersedes the old range of the political. It says: this is why reformism won't work!

What a wonderful review of Jameson and Brennan's comment It says: this is why reformism won't work! and didn't Marcuse say this long ago, "Capitalism is like pac-man as it keeps devouring and nourishing itself on it critics. Moore said the same about his movies. They make money for the distributors.

And vija Kinski in Cosmopolis: there is no outside.