The Many Faces and Names of Finitude 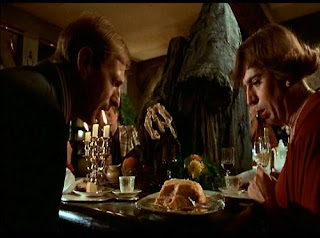 In Bernard Stiegler’s Technics and Time 1: The Fault of Epimetheus (a book which will require a more thorough review at another time), Stiegler suggests that the original relation between anthropology and technology should be considered through the perspective of a thanatology. It is death that introduces the fundamental absence through which technology enters into the world. It is because we die, and are aware of this fact that we create a memory for ourselves in the form of languages, tools, and devices. Animals, which are ignorant of their death, are also unaware of artifice.

Death has been elevated to an almost all encompassing philosopheme (to borrow Derrida’s term). Of course it started with Heidegger, but from Heidegger it has expanded, become ubiquitous as a sort of paradoxical concept, the transcendence of non-transcendence, the universality of the singular, or, the quotidian fact that exceeds and puts into question all quotidian facts. It reorients everything, so much so that language, history, and technology are seen to be grounded, or ungrounded in a primordial relationship with death.

Now, I am playing a bit fast and loose here, running over themes that have been developed with great care. My main point is to underscore the ubiquity of death as a philosophical theme. To be fair to Stiegler he does not completely fall into this pattern, devoting as much time to the origin of mankind as to the end. However, my point here is to quickly sketch a picture based on a reaction, so I ask for your indulgence, dear reader.

Spinoza is perhaps the philosopher that stands outside of this “thanatology,” meditation on finitude, but not just because he stated that a “free man thinks of nothing less than of death, and his wisdom is a meditation on life, not on death.” That statement taken by itself could be understood as simply a stoic refusal, easily dismissed as yet another way of evading the most primal and final fact of existence. However, Spinoza’s other remark about death is much more interesting. The passage reads as follows:

“But here it should be noted that I understand the body to die when its parts are so disposed that they acquire a different proportion of motion and rest to one another. For I dare not deny that—even though the circulation of the blood is maintained, as well as the other [signs] on account of which the body is thought to be alive—the human body can nevertheless be changed into another nature entirely different from its own. For no reason compels me to maintain that the body does not die unless it is changed into a corpse.”

Death is no longer the end all and be all of transformation. It must simply be thought as one transformation among others. Spinoza’s examples from the fantastic, the amnesia of a certain “Spanish Poet,” to the mundane, the radical gulf that separates the infant from the adult, all attest to a series of transformations of which death might be the final (decomposition?) but not necessarily the most dramatic. What I think Spinoza is developing is another thought of finitude. It is not finitude as the end of my individual existence, but my individual existence, insofar as it is individuated, as my finitude. What is difficult to think is not so much my end, the day that I die, as the determinations of my existence, but the fact that my existence in its supposed freedom is itself limited.

Spinoza’s idea of life as a series of transformations prefigures Simondon’s idea of the discontinuous nature of psychic individuation. For Simondon the subject is never identical with its individuation, it carries with it a certain excess, pre-individual singularities, habits, capacities, and affects that exceed its identity. This excess manifests itself in moments of anxiety, moments in which one recognizes that one has been individuated in a particular way, accumulating particular habits, desires, and associations, but could be individuated otherwise. Psychic individuation, the individuation of character and self, passes through a series of discontinuous ruptures, moments of anxiety. As Muriel Combes indicates, it is only in these moments of transformation that we perceive transindividuality, our social existence. Transindividuality is not community, or society, the banal fact of the presence of others, but the recognition that others, other bodies, make up the most intimate facts of our existence.

In my view death remains all too subjective to be a radical figure of finitude. Who has not imagined their own death, their own funeral, or a world without their existence, as in It's a Wonderful Life? Such fantasies confirm, rather than negate individual identity. (Of course I realize that this is not at all what Heidegger, Derrida, Nancy, and Stiegler are talking about, but I am never entirely sure if an idea can be totally separated from its recuperations and rereadings). It is more difficult to recognize that even in one’s identity one is finite, determined by history and place. I suppose that is what I am gesturing towards: an idea of finitude as history, or historicity, rather than history or historicity founded on finitude.

Etienne Balibar writes in a provocative formulation: “For philosophy ideology is the materialist name of its own finitude.” Ideology refers to the social relations that condition philosophy but are never mastered by it. Thus, it is possible to argue that the materialist name of finitude is not necessarily death, not necessarily the end of this “mortal coil” but the very constitution of this coil.

In other words it is not so much a matter of the salmon mousse that ends us, but the various histories that constitute us as talkative Americans and pompous Englishmen.

Posted by unemployed negativity at 10:10 PM