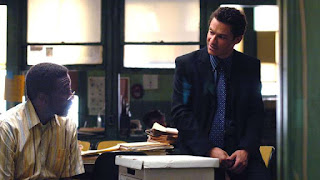 
Money appears in a dialectic of excess and poverty. The city of Baltimore and the Baltimore Sun are confronted with a massive shortage of money, and the show details the disastrous effects that this has not only on morale but on the capacity for such institutions to function. As the editor of the Sun claims, it is necessary to do more with less, a glib phrase that, like so many clichés, proves to be impossible in practice. As the series demonstrates, the layoffs are much more than a numerical reduction of the number of employees working at the paper; they destroy the foundation of knowledge and connection that a newspaper rests on, as reporters with experience are replaced by new reporters lacking in basic knowledge of the city. (Part of Simon’s theme that people are not quantifiable, not calculable in the form of costs and benefits). On the side of excess, the money trail leads to Clay Davis, who in the end proves to be less of the top of the pyramid than dense nodal point of corruption. Money does not just flow from the street to the halls of politics, but back out through the lawyers who pay for inside information about the courts. There is also an excess of money on the street and the show details how this money is laundered and invested.

The other theme, “truth and fiction,” permeates the final season. On the meta-level there is the fact that the show deals with the Baltimore Sun, the newspaper where David Simon worked and from which he learned the stories of Baltimore that constitute the raw material for the show. The season could be understood as a reflection of the power of fiction to communicate more effectively than truth. This, after all, is the beginning of McNulty and Freamon’s serial killer lie. The truth of the dead bodies left behind by Marlo Stanfield doesn’t sell, in part because of the race of murdered, but also because it lacks a hook, something to create interest. However, the story of a serial killer, especially one with sexual motivations, is capable of generating headlines. On a related point, the final season also seems to be more “fictional” than previous seasons, the sprawling plotlines are cut considerably for a tighter plot that seems less plausible (from the serial killer story, to Omar’s daring leap from a window). This could be a meta-moment as well, the show reveal itself to be ultimately a cop show.

Much more could be said about both of these themes, but the interesting question has to do with examining the point where they intersect. To understand the connection between money and fiction, money and lies, is to understand contemporary capitalism. Money and fiction intersect repeatedly. First, there is the somewhat obvious connection that shows the “value” of lying, lying increase value, makes possible wealth. This is true for Clay Davis, but also for McNulty, whose lie brings him money, making him, the ultimate rebel, an awkward institution within the institution. Second, there is also the way in which money itself is revealed to be a kind of fiction, an abstraction, disconnected from its material existence. This is shown through the character of Marlo Stanfield, who takes money literally. When “The Greek” asks for clean money, Marlo returns with fresh pressed bills. Marlo also insists on traveling to the Cayman Islands, or wherever his off shore accounts are held, and seeing his money. In the age of financial capital, money is less and less a medium of exchange, a medium of value, than it is something that demonstrates the power of one’s fictions, the capacity of making people believe your story (about serial killers, investment opportunities, the future of the oil market, etc.,)

Finally, as much as I love the character, Omar Little had to die. Given that the dominant theme of the entire show is in some respects the conflict between the individual and institution, Omar has always been something of a utopian figure, a man without an institution. This is a huge aspect of his appeal, a man who lives by his own rules, his own code, representing the possibility of pure individual action, on mitigated by structure or institution. (Thus it is not surprising that Obama is a huge fan of Omar.) The closest that the show comes to a utopian moment is the scene of Omar living out his retirement (in Cuba? Puerto Rico?), suggesting a possible outside to "the game." These final moments are only a culmination of what Omar always represented: a life outside of institutions, free of the constraints of the drug world or the police. Thus, if Omar lived the show would surrender its main point; that the very institutions that make our actions possible ultimately work against us. As David Simon says, "Whatever institution you as an individual commit to will somehow find a way to betray you on "The Wire."

Posted by unemployed negativity at 12:18 AM