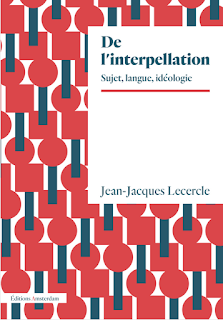 The concept of Interpellation is perhaps one of the few concepts of Althusser's to make it outside the orbit of his circle to become a general theoretical concept. It remember one year in which it seemed everywhere, showing up in books by Judith Butler and Donna Haraway. This has very uneven effects, people who are more thoroughly engaged with Althusser will point out that concept comes from a fragmentary essay, identified as "Notes towards an investigation"itself part of a draft manuscript. Its best insights are derived from either Spinoza or Lacan (depending on who you ask).

Jean-Jacques Lecercle takes up not so much Althusser's concept of interpellation but its primal scene, the police hailing a subject, to develop an understanding of not just ideology, but also language and the subject in De l'interpellation: sujet, language, idéologie. Lecercle’s book opens with a recapitulation of Althusser’s “primal scene” of interpellation, the cop hailing a person on a street, and goes onto explore what this means for a consideration of language in general. In doing so Lecercle brings together Althusser and Deleuze and Guattari’s analysis of “order words” [Mots d’ordre] in A Thousand Plateaus with Althusser’s hail. What ties the two together is an examination of the pragmatics of language, the situation in language in relations of power and force and the force and power specific to language. Lecerle expands beyond the initial scene described by Althusser to consider insult, rumor, and order words (slogans) as particular articulations of power and language. Insult is of a particular interest for Lecercle given its proximity to interpellation. Insults are themselves a kind of hailing. An insult is often a failed interprellation, or an interpellation that is not interiorized into an “auto-interpellation,” as Lecercle argues every interpellation necessarily involves an auto-interpellation, a moment of appropriation where one recognizes oneself in the terms of the interpellation. A counter-interpellation is not just an interpellation that fails, does not become an auto-interpellation, but that every interpellation necessarily produces its discord and tension. Lecercle has two sources for this notion, the first is Judith Butler’s notion of enabling constraints, the notion that the very things that limit us, and act on us make it possible for us to act. One could argue that there is a history of turning insults into interpellations (and perhaps vice versa) as words meant to constrain and demean become reappropriated as labels, identities.The insults and interpellations that define our place in language also give us a place to act. The second source is the philosophical anthropology of Lucien Sève. For Sève, human activity, language included, is framed between Vergegenstandlichung, objectification, and Aneignung, appropriation. Interpellation is an appropriation, an internalization, that both restricts and makes possible action, objectification.

Lecerle's use of Sève to dialecticize Althusser, to add a counter-interpellation to interpellation is not the strangest bedfellow in this book. He also revitalizes Tran Duc Thao author of Phenomenology and Dialectical Materialism. Thao offers a different "primal scene" of ideology, not that of a hail, a voice, but of an immediate experience, of a "sensory interpellation," the way that the world already feels and looks a particular way. Lecercle argues that this is not that far from Althusser, after all the latter insisted on the primacy of practice over ideas, of the acts of kneeling and praying over belief, to cite the famous example from Pascal. (I would argue that it goes further than that since "spontaneous ideology" is at the center of Althusser's thought). These two primal scenes then offer a double determination of ideology, it exists once at the level of things, at the level of the way in which the world we inhabit, sense, and feel is instituted in and through a particular social order, and it is also instituted at the level of ideas, or words, at the level of how we are named, addressed, and ultimately think. (This is also a Spinozist idea). 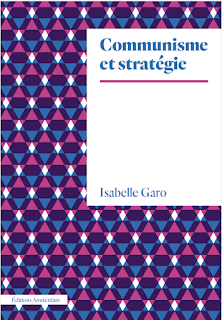 Perhaps, the best way to approach Isabelle Garo’s Communisme et Stratégie is to situate it in terms of a kind of revival of communism in recent years. Or, as Garo would stress, a philosophical revival of communism. Conferences and publications have appeared dedicated to the “communist hypothesis” and philosophers have articulated “communist ontologies.” To paraphrase a line from Marx this revolution has primarily taken place in the realm of theory, in philosophy. Garo argues that the philosophical turn to communism offers an important counterpoint to the neoliberal domination of thought, asserting that there is nothing necessarily rational or necessary about capitalism, but it does not in itself offer a politics, or a way to think politics in terms of Garo’s book is an attempt to move from communism as a philosophy, as a thesis or an ontology, in back into the realm of practice into strategy.

The first part of the book is dedicated to several of the recent intellectual advocates (and one detractor) of the communist turn. The first chapter is dedicated to Alain Badiou. Badiou is a contradictory figure, defined as much by his militant fidelity to the communist tradition of Marx and Mao as his attempt to sustain that tradition within the space of philosophy alone, separate from the analysis of economy, or the question of the state. Badiou is an important foil for Garo in that his insistence on the direct, and immediate, effects of the communist hypothesis is defined by a refusal of the mediation of the state, party, or economy. Mediation becomes a central problem of Garo’s communist politics in the following chapters. The second chapter is dedicated to Ernesto Laclau. This is at first a seemingly strange inclusion both chronologically and conceptually. Hegemony and Socialist Strategy would seem to belong to another period in philosophy and politics, one prior to the “communist turn.” For Laclau it is less a matter of the necessity of communism as a kind of invariant than of constructing socialism from the contingency of different discursive positions. Garo’s discussion of Laclau after a chapter on Badiou, however, discloses some unlikely points of similarity. For both the Marxist critique of the exploitation of labor power under capital has nothing to add to politics. Politics proceeds from a subjective articulation or decision that has nothing to do with the base or economic transformations. The third chapter deals with Antonio Negri, or rather the works that Negri wrote with Michael Hardt. Negri and Hardt would seem to be absolutely opposed to Laclau, arguing for a communism that is necessarily hostile to any socialist mediation, as well as Badiou in grounding the constitution of the radical subject in the transformation of labor. However, as Garo argues, Hardt and Negri’s tendency to grasp the labor/capitalist relation as an absolute opposition between cooperation and command, immanence and transcendence, multitude and empire, posits a commonality in that they too refuse any mediation, any sense that this relation is something other than an epic divide. As Garo writes in the later section of the book, "The originality of Marx's approach lies in the dialectical nature of his analysis of contradictions, which is not the mere juxtaposition of opposing tendencies: the capitalist labor process is not on the one hand alienating and on the other emancipating, it closely intertwines these two tendencies at the very center of the individuality of the worker and at the heart of social relations."

Garo's remark brings us back to Sève, to his theory of human personality in which the contradictions of the social relations, abstract and concrete labor (interpellation and counter-interpellation) are repeated at the level of the individual. As Sève writes in Marxisme et Theorie de la Personalite,

"This productive activity of men, being a social activity, is entirely governed by the objective dialectic of social relations-and in this sense, which is that of economic theory, men appear only as support for economic categories.; but on the other hand, being an activity of men, it also immediately constitutes a fundamental aspect of their individual life process. These are two sides of the same reality."

(As something of an aside I should say that what drives me to write about Lecercle and Garo in the same post, besides the fact that I read them right after each other, is this turn not just to Sève, who maybe having a renaissance of sort, but of a return to a more classical Marxism, dialectical and materialist, and a turn to a tradition of communist thought that existed alongside "theory.")


After having completed an examination of the limitations of the philosophical turn to communism Garo turns her attention to thinking communism as a strategy. This entails a reading of Marx that seeks to articulate its strategic kernel, a kernel that develops and grows. What Garo finds beginning with the young Marx is a dialectic in which capital is viewed in terms of both its political and social effects. This is how Garo reads together the early criticism of Hegel and the essays on alienation. Thus, communism as a strategy is constantly operating across politics and economics. As Garo writes with respect to Marx’s writing on the Paris Commune, it is the combination of the democratization of political forms and the politicization of social forms. It is a politics of mediation, in that the social conflicts of class are always mediated by the political rights and legislations, and the political conflicts are always mediated by the state of labor and social class. On this reading the “ten-hour” bill is a central aspect of the logic of Capital, the political transformation of working conditions, of social relations, becomes the condition of further transformation of working conditions. The social mediates the political and the political mediates the social.

Chapter 6 outlines a broader strategy of mediation that begins with a consideration of the philosophical history of the mediation. This history begins with Aristotle, with the middle term as that which is both “contained in a term and contains a term.” Mediation for Aristotle is a matter of logic, ethics, and politics the latter of which are defined not just be the virtue of the mean, but of the demand not to turn means into ends. For Hegel mediation is less a middle term than an active process that subjects everything that appears to be immediately given to the labor of the negative. What is maintained between Aristotle and Hegel is the mediation as a passage from the universal to the particular. This is what is interrupted in Marx. There is no passage from the particular and universal that does not pass through contradictions and crises. Marx does not have a systematic theory of mediations, but his multiple reflections on the social and political mediations of money, law, and the state, show that mediations are “subject to an open evolution, specifying a contradiction susceptible of several becomings and oriented towards a collective project.” The turn to mediations, to the strategic dimension of reforms entails a different thinking of the relation of socialism to communism. As Garo writes, “If one adds that the term communism tends today to become a thematic more theoretical and philosophical than political, repolitization consists not simply in the focus on the transition, but the construction of durable political mediations, it is necessary to consider that socialism continues to designate the concrete perspective of those who think as communists.” In the debates about the definitions of communism and socialism Garo presents an interesting definition, socialism is the strategic thinking in practices through the mediations of society and politics necessary to bring about communism.

I can't say I agree with her on this final point, but the question stands. To draw the two books together in one final dialectic one can say that it is a matter of transforming the existing contradictions of this world into something that can sustain something different.

Posted by unemployed negativity at 7:48 AM