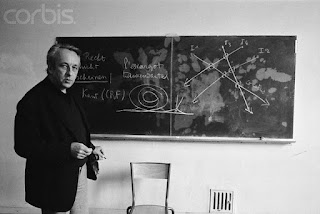 In this essay Althusser argues that the contradiction is not just that between Marxism and particular tenets of this or that philosopher, Hegel, Feuerbach, etc., but between Marx’s understanding of the place of philosophy in social relations and philosophy’s dominant self conception, what could be called the spontaneous philosophy of philosophy. As Althusser writes,

"Contrary to the whole rationalist tradition, which requires only a straight, true idea in order to correct a bent, false idea, Marxism considers that ideas have a historical existence only in so far as they are taken up and incorporated in the materiality of social relations."

There are elements of Althusser’s own self-critique of “theoreticism” as well as elements of Marx’s German Ideology, and even of Spinoza’s assertion of the limited efficacy of the true insofar as it is true (EIVP1), in this passage. All three references are connected by a single thread, which displaces the central idealist opposition of truth and falsity with the materialist criteria of causes and effects. It is a restating of the time honored opposition of idealism and materialism, but it is more about the practical effects of the ideas rather than their underlying metaphysics. To be a materialist is not to argue for matter as the ultimate reality rather than ideas, but to argue that ideas only have effects once they are disseminated, circulated, and put into practice. Ideas must be situated back in the social structure structure in terms of both their conditions and effects. This idea of materialism is perfectly consistent with Marx, who had little to say about matter but a great deal to say about the effects of history and social relations on thought, and vice versa. This is why Althusser will later argue that Marx constitutes a new practice of philosophy, a new way of thinking philosophy’s relationship with its constitutive outside, rather than a new philosophy of praxis, a new attempt to ground philosophy on some materialist concept, such as practice, rather than an idealist concept.

As the title of his essay suggests, Althusser considered this relationship between philosophy and its outside, figured as either the economy or history, from the perspective of philosophy. History’s particular irony here is that it has proven that it is at the very least possible (but not necessarily simple) to be a Marxist in philosophy. In the decades after Althusser asked this question, Marxist thought would make headways in circles dedicated to discussing contemporary continental philosophy (I am not talking about philosophy departments). Once you get past the original names of Marx, Engels, Lenin, and Mao, any discussion of Marxist thought ends up with philosophers, Gramsci, Adorno, Althusser, Negri, Zizek, Balibar, Karatani, Jameson, Badiou, etc. So we can ask the question as to where this practice falls today?

The dominant mode of Marxist philosophy is situated between a critical socio-economic discourse, with its demands of historical specificity, and an ontology of the present, with its demand of generality. This is the general conceptual structure of all those attempts to make sense of the present, to grasp the conjuncture, from cognitive capitalism and biopower to various forms of globalization and capitalist realism. Such a discourse always risks being found lacking on both sides. First, from the perspective of political economy, any statement regarding the tendency of capital in general, or of labor in general, overlooks the complexity and contradictions of the present; second, from the perspective of philosophy, any introduction of the specifics of contemporary capitalism into an argument regarding the fundamental dimensions of subjectivity seems to be an extraneous assertion, an empirical argument rather a conceptual determination. Thus, any such discourse, which could be called “economic philosophical,” to borrow the title of Marx’s eighteen forty-four notebooks (a text which is never far from such concerns) could disappoint everyone by simultaneously being too abstract and too concrete, historicist and lacking in historical specificity, all at once.

Of course this can seem like playing both sides against the middle, a conceptual Yojimbo. Whenever a philosopher makes some objection about the incoherent nature of some conceptual point, all one has to do is site some study of trends in the shifts in working hours across the globe; likewise, if an economist or historian raises an objection about the limited sociological merits of the term "precariat,"all one has to do is cite Heidegger or Simondon on anxiety. Philosophical objections can be met with history, historical or economic objections can be responded to with philosophy. Some of the early criticisms of Marx made similar points: to economists his writing was far too dialectical, too conceptual, to be economics, and too empirical, too concerned with the minutiae of factory legislation to count as philosophy.

At the same time, Marx is fairly unique in the history of philosophy in that if you work on Marx, and attend conferences like Historical Materialism and Rethinking Marxism, you will be exposed to people doing research in political economy, history, culture, and politics. Like I said this is unique, one could spend one's entire life dedicated to Kant, to Kant's anthropology or aesthetics, and never talk to anthropologists or people doing work in aesthetics. In fact, all of the discipline of philosophy is constituted so that this is the case. This is why I have often thought that the image of Marxism as a dogmatic mode of thought is somewhat misplaced. It might fit some soviet past, or the attitude of some philosophers lingering around but it misses some of the real innovation that takes place in the encounter between philosophy and its outside.

It seems to me, and this might be the meaning of Althusser's original formulation, the task is to transform the limitation into a strength, to move from playing both sides against the middle to transforming the space of encounter between philosophy and its outside into both a continual point of challenge, a challenge to philosophy and its tendency towards ahistory as well as a challenge to the unexamined conceptual grounds of other disciplines, as well as a point of innovation. To cite another passage, one that has meant as much to me personally as Althusser's essay on Marx and philosophy, Negri writes the following about Spinoza, about the importance of the Tractatus Theologico-Politicus for the development of the Ethics.


"The Ethics could not be constituted in a project, in the metaphysics of the mode and of reality, if it were not inserted into history, into politics, into the phenomenology of a single and collective life: if it were not to derive new nourishment from that engagement."


Of course this is about Spinoza and not Marx, and even though I have mentioned Spinoza above, and Spinoza is never far from Althusser's thought on philosophy, such a transition involves more justification than I can give it here (I have written on Negri and Althusser's particular engagement with Marx and Spinoza here and in a second essay coming out soon). The fundamental point, however, is to think of a philosophical project, an ontology, that requires an engagement with the forces of history and politics to constitute itself. It is worth noting, as something of an aside, that much of the contemporary revitalization (no pun intended) of Spinoza studies, especially the work done by Lordon, Matheron, Moreau, Negri, Bove, etc., etc., is fueled by this criss-crossing of speculation and history, albeit a history framed more in terms of the religious imaginary and scripture than the mode of production. It is this aspect that makes these works Marxist.

What I am attempting to articulate here is less of a settled point than a provocation. I am trying to convert my own anxiety about thinking through the intersection of philosophy and history  into something that can be conceptually productive by reflecting on the particular constraints and provocations of Marx and philosophy. To conclude then, developing this intersection of transformation and innovation demands real work, and it will most likely be collective in nature (after all, not everyone can hole up in the British Library for years, devoting equal time to the Science of Logic and reports on the working conditions in Manchester). It is not simple to be a Marxist in philosophy, or a philosopher in Marxism, but all things excellent are as difficult as they are rare.

Posted by unemployed negativity at 4:56 AM

Not nitpicking Jason, but I have always been under the impression that this was in fact the text of an oral defence of his doctorate, which was based on published work, hence why it refers to those key works. I might be wrong, but that's what I have always thought. It was quite common then with academics to assemble a doctorate that way, as many were published and employed as academics long before a PhD was considered.

Nice piece on it, and it is one of my favourite essays too, one that I come back to regularly.

Oh, the edition in Spontaneous Philosophy says it "accompanied" the collection of writings for his Doctorat d'État. I assumed that meant that it was written. It is even more impressive if it is the transcription of an oral argument. Actually, many of the Doctorat pieces I have read are quite good, Balibar's "Infinite Contradiction" and Macherey's come to mind as well.

Jason, where can I read Infinite Contradiction?

This is a wonderful mini-essay. It occurs to me that the reverse of this logic might be true of psychoanalysis: a discourse becomes psychoanalytic when it recognizes that historical and bodily matter are always-already mediated by concepts... maybe that makes sense, maybe not.

It was published in an issue of Yale French Studies dedicated to Althusser, Balibar, and Macherey. There are several good pieces in the journal, including Montag's essay on Althusser and Foucault.
http://books.google.com/books/about/Yale_French_Studies_Number_88.html?id=npkoAAAAYAAJ

If I remember correctly Jason there was an item on this in Radical Philosophy around that time, called 'Dr Althusser', giving some kind of account of his doctoral defence. I dare say that he made some changes to it after the fact, but from memory it was his defence

Here's the article, which you can download free from RP. http://www.radicalphilosophy.com/news/doctor-althusser-swansea-and-belgrade-rpg-reports The original French title of this essay was of course simply Soutenance d'Amiens

Unknown said...
This comment has been removed by the author.
12:43 PM

Unknown said...
This comment has been removed by the author.
12:44 PM

Thanks, this is interesting, but I am not sure if we are arguing here, or what about. I said that it was part of his doctorate defense. I know that I said that he wrote it, which might not be the case but it is hard to imagine that he could deliver something like that without at least notes. It is more accurate to say he presented it. I will correct the original blog to reflect that.