Trumped: The Ecology of Attention and Affects 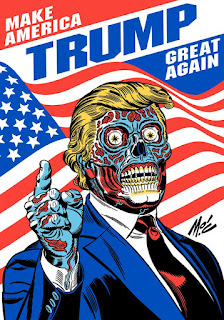 
Pitch for a sequel to They Live. The "ghouls" (as they are referred to in the script), or aliens, have been unmasked by Nada's (Roddy Piper) destruction of the signal in the first film. Some are hunted down, while it is rumored that others have gone into hiding, finding new ways to disguise their horrifying appearance and devious plans. The destruction of the ghouls does very little to change things, the wealthy still dominate and the poor still suffer. Then one day a ghoul emerges that does not conceal his appearance, or his intentions. He makes it clear that he plans to continue accumulating massive wealth. When people point out that his kind exploited and depleted the planet he freely admits it, pointing out that running a inter-dimensional conglomerate is no small task. It was a huge and impressive endeavor. As much as one might be critical of the ghoul's exploitation of the planet, no one can doubt that they got things done. This ghoul then states that he is running for president. Critics declare that he is a ghoul, but he makes no secret of it. No one can unmask him, for he is already unmasked; attempts to reveal his sinister motives are belied by his willingness to state them clearly. The ghoul eventually wins, and once again the country is under their thrall, only now openly so.

My sequel pitch is meant as both an attempt to convey something of the weirdness of the phenomena of Trump, who seems like something from an early Carpenter or Cronenberg film (the hair has something of Cronenberg body horror to it) and of the limits of ideology critique in grasping this particular phenomena. If They Live can be seen as "Ideology Critique 101" then Trump reveals how inadequate ideology critique is to the present.

Trump has dispensed with every dog whistle, with every coded reference to racism, class domination, and misogyny, preferring instead to openly declare racist, sexist, and jingoistic statements. I will spare you the litany; everyone remembers "the Mexican rapist," the comments about Megyn Kelly, the promise to exclude all Muslims, etc. With each statement pundits declared that Trump's career was over. This, after all, was the logic of past elections. This did not happen, and might never happen, suggesting that something else is happening--some mutation of the mediasphere.

Two steps towards a theory of Trump.

I do not think that it is possible to overstate the role of celebrity in Trump's case. It is, however, a particular kind of celebrity. Trump is not a rich person, well not that rich by the standards of the US oligarchy, he just plays one on TV. He has converted his wealth and economic value into "sign value." He understands that universal concepts need their particular instantiation in order to be comprehended or imagined. They need a figure, a face, something to given the abstract idea of wealth and success a definite shape. Trump has been all too wiling to play the figure of the wealthy businessman so much so that his movie and television appearances are inseparable from his appearance. For decades he has become the symbol of wealth and power. His oddly coiffed hair replacing the figure of the monocle and top hat of Mr. Moneybags.  He is the spectacle of wealth not its reality.


Trump belongs to a particular subset of celebrities, mainly reality TV stars, heirs and heiresses, and other minor celebrities, that have managed to eek out far more than they should from their fifteen minutes of fame. These celebrities disappear from the public's eye momentarily only to return with a "controversial tweet," "scandalous instagram pic, or other nonevent. In doing so they show that they perhaps understand the "ecology of attention" better than we give them credit for. They tap into the short term distractions of "trending topics" all the while building name brand recognition. This is a different kind of reputation, a different kind of value, than the sort built up by a career in politics (or film or music). Its brilliance is that unlike other forms of reputation or authority it appears not to be imposed but consented to. It stems not from education or talent, but from the faux-democracy of retweets and late night television jokes. Trump's genius is in convincing us that we made him, that he is the product of our clicks, conversations, etc. That is how an oligarch, even the image of one, becomes a populist.

It is impossible to talk about Trump without talking about affects, and the politics of affects. Much has been made of his rage, his anger, and his ability to tap into the rage of a white working class. He has gone further than any candidate in mobilizing a racist anger and fantasies. However, he also understands the importance of joyful affects. His "Make America Great Again," and references to "winning," even his claim that he would make it so people said Merry Christmas again, are pure assertions of a kind of joy tinged with sadness--in other words nostalgia. They are not meant to have content or clarity. Specific proposals and goals would only dampen the feeling. They tap into a general sense that things were better once. Trump is a remake of Reagan.

These aspects of Trump's candidacy are not going away, no matter what becomes of him. They are elements of the current state of the spectacle. As Angela Mitropoulis has asked, the question is not is not Trump fascist, but what fascism becomes in a media driven economy.

If you have ever watched reality TV. You know two things define programs like The Bachelor. First, they are constantly advertising themselves as you are watching them. Every commercial break is bookmarked by a promise of what is "coming up" with clips of drama and heartbreak. All television shows advertise but reality TV never stops advertising--even when you are already watching the show. Second, these clips are often fabrications. The actual events are never nearly as dramatic as they are promised. Clips promising a dramatic confrontation turn out to be edited together from disparate events; the blood spilled on the floor is not from a violent confrontation but from someone slipping by the pool. The lie is no sooner revealed than the next dramatic event is promised. I am not going to connect all of the dots here, but in the end I think reality TV is a more instructive manual for understanding Trump's presidency than any work of political theory.
Posted by unemployed negativity at 10:08 PM