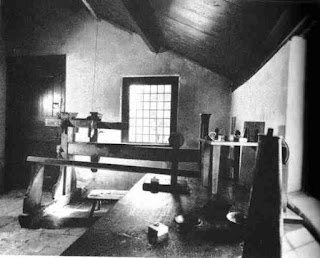 With all of the attention on Spinoza by Marxists is is surprising how little is written about Spinoza and work. Spinoza has provided theories of ideology, of alienation, and even of the relation between forces and relations of production, it is surprising that few have remarked on what Spinoza actually says about labor or work. This is perhaps due to the fact that it would appear that there is little there, Spinoza's interests were elsewhere. There are only a few references to work in Spinoza, but I would argue that they are significant.

Work, or labor, appears not just as a quotidian reality in Spinoza's writing but as an activity that is formative to knowledge. As Spinoza writes describing the interpretation of signs.

Spinoza’s formulation is often cited as a demonstration of the act of interpretation; that signs, traces, are necessarily interpreted by and through previous signs, past acts of interpretation, and ultimately the habits or character of the individual. However, it is less remarked that the distinction that Spinoza selects to illustrate this difference is not that of nation or language but the division of labor. Soldiers and farmers interpret the same sign differently because the history of their labors has shaped their character, or ingenium, to the point that includes not just the habits of the bodies but the relation of ideas in the mind. Consciousness determines life, including how one makes sense of and interprets something like hoof prints in the sand. Spinoza thus describes human beings as spiritual automatons, arguing that minds are determined by causal relations as much as things, to which it is possible to add that spiritual automatons are programmed, or wound up differently, according to the division of labor. Work does not just divide humanity into different tasks but it also underlies our basic vocabulary of values.

"For example, if someone sees a work (which I suppose to be not yet completed) and knows that the purpose of the author of that work is to build a house, he will say that it is imperfect. On the other hand, he will call it perfect as soon as he sees that the work has been carried through to the end which its author has decided to give it. But if someone sees a work whose like he has never seen and does not know the mind of its maker, he will, of course, not be able to know whether that work is perfect or imperfect. And this seems to have been the first meaning of these words."(EIVpref)